Federal investigators shut down a massive Hamas-support network in the United States between 2001 and 2008, prosecuting some elements and freezing the assets of others.

But the Investigative Project on Terrorism finds that many of the same functions – fundraising, propaganda and lobbying ­– endure, now carried out by a group called American Muslims for Palestine (AMP). The IPT investigation identified at least five AMP officials and speakers who worked in the previous, defunct network called the "Palestine Committee." It was created by the Muslim Brotherhood to advance Hamas' agenda politically and financially in the United States.

Last year, AMP joined a coalition of national Islamist groups in forming the U.S. Council of Muslim Organizations. The Council on American-Islamic Relations (CAIR) is among the other founding members (for more on that coalition, click here). CAIR and its founders appear in internal Palestine Committee records admitted into evidence during the largest terror financing trial in U.S. history.

Several Palestine Committee entities were created by Mousa Abu Marzook, who remains a top Hamas political leader. One branch, the Holy Land Foundation for Relief and Development (HLF), was convicted in 2008 along with five senior officials, of illegally routing more than $12 million to Hamas. HLF's role in the Palestine Committee was the chief fundraising arm for Hamas in the United States, prosecutors say.

"The purpose of creating the Holy Land Foundation was as a fundraising arm for Hamas," said U.S. District Judge Jorge Solis during a sentencing hearing.

UASR published an academic journal and, prosecutors say, was "involved in passing Hamas communiques to the United States-based Muslim Brotherhood community and relaying messages from that community back to Hamas."

Today, AMP routinely engages in anti-Israeli rhetoric, sponsors conferences that serve as a platform for Israel bashers, and openly approves "resistance" against the "Zionist state." One AMP official acknowledged the goal is to "to challenge the legitimacy of the State of Israel."

An April 2014 AMP-sponsored conference in Chicago, for example, hosted Sabri Samirah, the former chairman of IAP, as a speaker. There was little to no talk about how to achieve peaceful coexistence.

"We are ready to sacrifice all we have for Palestine. Long Live Palestine," Samirah said. "We have a mission here [in the U.S.] also to support the struggle of our people back there in order to achieve a free land in the Muslim world, without dictators and without corruption."

The U.S. government had earlier deemed Samirah a "security risk" and he was barred from reentering the country for several years following a trip to Jordan in 2003. While in Jordan, he served as a spokesman for the Jordanian Muslim Brotherhood's political party, the Islamic Action Front. The charges against Samirah were subsequently dropped and he returned to the U.S. last year.

The AMP event also applauded Palestinian terrorist Rasmieh Odeh as "a great community member, a great member of the Palestinian cause, a great activist for the Palestinian cause." Odeh was under indictment, and later convicted, on federal naturalization fraud charges for failing to disclose her conviction in an Israeli court for her significant role in a 1969 terrorist bombing at a Jerusalem grocery store that killed two university students. Those charges, the AMP claimed during an April 2014 event, were "politically motivated" so as "to hurt the active Palestinian solidarity movement and to hurt all strong Palestinian activists that are standing for the just cause of Palestine."

AMP board member Osama Abu Irshaid has close affiliations to both the IAP and UASR. Abu Irshaid formerly served as editor of IAP's Arabic periodical, Al-Zaitounah, a mouthpiece for pro-Hamas propaganda. The magazine also published advertisements by terrorist-tied charities, including HLF, the Global Relief Foundation (GRF), and the Benevolence International Foundation (BIF).

Abu Irshaid served on the board of the American Muslim Society (AMS), which served as another name for the IAP. He is listed as "Research Fellow at the United Association for Studies and Research" in a 1999 article published in the Middle East Affairs Journal, a UASR publication, titled, "Occupied Palestine or Independent Israel: 'The Right to Existence' After More Than Fifty Years of Occupation."

In the article's conclusion, Abu Irshaid argues against past peace agreements with the "Zionists" including the 1993 Oslo Accords: "The most unfortunate aspect of these agreements is that they put an end to the zero-sum game of 'occupied Palestine or independent Israel,' in favor of the latter, an independent Israel." He adds, "The PLO effectively traded Palestinian historic and religious rights in its pursuit of a legacy for Yasser Arafat, the PLO Chairman. One motivation was its envy of the resistance, because the intifada earned greater admiration among the Palestinian people, who have consistently shown their support for the resistance by electing resistance candidates to various elected positions in lieu of PLO candidates. Perhaps Yasser Arafat and his cronies felt that the only way to stay in power and to defeat the resistance was to sell out the people and become a collaborator with the Zionists who promised them power, money, and peace."

In addition to being formed by Marzook, UASR was headed by Ahmed Yousef who now serves as senior political advisor to the former HAMAS prime minister of Gaza, Ismail Haniya. In 1998, while serving as UASR's executive director, Yousef gave an interview to the Middle East Quarterly in which he defended Hamas. When asked, "Is Hamas a terrorist group?" Yousef responded, "No. Hamas was founded during the intifada and it operated within the confines of the Geneva Convention. It later became a charitable and social service organization in the West Bank and Gaza, helping Palestinians forced off of their land and into unimaginable suffering, humiliation and poverty." 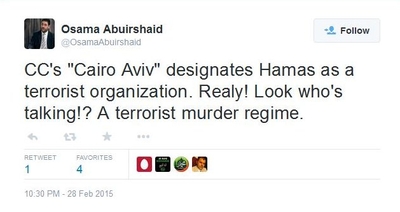 In a Feb.28 tweet Abu Irshaid condemns Egyptian President Abdel Fattah el-Sisi's designation of Hamas as a terrorist organization and refers to Sisi's government as "Cairo Aviv" as a rebuke to existing close relations between Cairo and Tel Aviv. 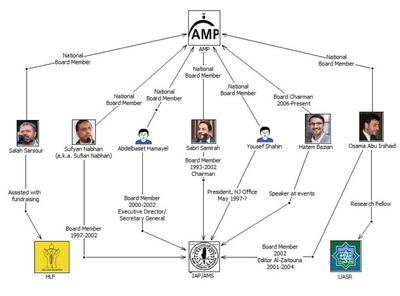 Other AMP board members with "Palestine Committee" ties include:

Salah Sarsour – A 2001 FBI report talks about Sarsour's involvement with Hamas and fundraising on behalf of the Hamas charity, HLF. A 1998 Israeli police report recounting an interrogation of his brother Jamil Sarsour substantiates these claims, stating that Salah Sarsour was an HLF employee and "collected funds for this organization."

Sarsour was arrested by Israeli authorities in the mid-1990s and sentenced to eight months in prison in Ramallah, allegedly for support to Hamas. While in prison, he became "very good friends" with Adel Awdallah, a former leader of Hamas' al-Qassam Brigades, who was killed in an Israeli attack in October 1998. He also sent money to Awdallah "several times" through his brother Jamil Sarsour, who pleaded guilty to aiding Hamas and served a multiple year sentence in Israel before being deported to the U.S. in 2002.

Sufyan Nabhan (also Sufian Nabhan) – served on IAP's Board of Directors. During a May 2010 event commemorating the Palestinian "Day of Catastrophe" (also known as "Al-Nakba"), Sufian criticized the "Israeli occupation of Palestine." He was reported saying, "Occupation is apartheid, occupation is segregation. Massacres are going on daily."

Abdelbaset Hamayel – Formerly served as IAP executive director and secretary general. Hamayel was also a representative of the Illinois and Wisconsin offices of the terror-tied charity, KindHearts for Charitable Humanitarian Development.

The U.S. Treasury froze the assets of KindHearts in 2006. The charity that was dissolved in January 2012 has made contributions to Hamas-affiliated organizations, including significant donations to Sanabil Association for Relief and Development, a Lebanese charity that was designated a Hamas front by the Treasury Department in 2003.

KindHearts was called "the progeny of Holy Land Foundation and Global Relief Foundation, which attempted to mask their support for terrorism behind the façade of charitable," by then-Under Secretary for Terrorism and Financial Intelligence Stuart Levey.

A 2002 U.S. Treasury Department press release announcing the designation of the Global Relief Foundation alleged it "has connections to, has provided support for, and has provided assistance to Usama Bin Ladin, the al Qaida Network, and other known terrorist groups." The press release further stated that GRF had received $18,521 from HLF in 2000.

Yousef Shahin – Identified in a feature article in Al-Zaitounah's May 1997 issue as president of IAP's new branch in New Jersey. "Then Yousef Shahin, president of the [IAP New Jersey] branch, spoke and thanked all who shared in the success of this project, and asked the sons of the community to support the project materially and morally," a translation of the article in Arabic states.

Shahin has countered allegations against former British MP George Galloway for raising funds for Hamas: "He's not taking money for terrorists," Shahin was reported saying. "He's buying medical supplies for the hospital. He's not dealing with a terrorist organization. We were assured by him; he's going to give everything to the hospital."

Shahin was also listed as a point of contact for an AMP banquet that included Galloway and Osama Abu Irshaid as speakers.

Hatem Bazian – AMP's chairman spoke at a number of IAP events. According to IAP's Al-Zaitounah, Bazian was a guest lecturer at an IAP event at the University of Wisconsin in Milwaukee on April 13, 1998. The event was titled, "Fifty Years of Despair and Punishment for the Palestinian People." An article in IAP's Al-Zaitounah magazine summarizes Bazian's lecture: "During the lecture he [Bazian] spoke on the practices of the loathsome Zionist entity [against] the rights of the Palestinian people."

Bazian has called on Americans to create a violent uprising at home in 2004 similar to the Palestinian intifada.

"Are you angry? ...Well, we've been watching intifada in Palestine, we've been watching an uprising in Iraq, and the question is that what are we doing? How come we don't have an intifada in this country," Bazian said. "It's about time that we have an intifada in this country that change[s] fundamentally the political dynamics in here. And we know every – They're gonna say some Palestinian [is] being too radical – well, you haven't seen radicalism yet."

Further, at an AMP event at the University of California in Santa Cruz in November, Bazian provided the "victimization argument" to justify Palestinian violence. "Palestine is the victim that is being victimized once again by actually blaming them for the fact that they respond. Palestinians' response to settler colonialism has been identical to every colonized people's response when they are confronted by the colonization process," Bazian said. He also failed to openly condemn Hamas, and instead held Israel responsible for the ongoing conflict in the region: "So the question—is Hamas good or not good for the Palestinians –it's a question that is superficial because it does not address the context within the specificity of what is occurring on the ground of the Palestinians and how Israel is running a massive jail, shifting its powers and resources from one group to the other in order to manage an occupied colonized population."

At an April fundraising dinner in Chicago, AMP National Media and Communications Director Kristin Szremski announced the recent opening of the organization's Washington, D.C. office to advocate for the Palestinian cause. While claiming "we don't lobby," Szremski said that "for years the American Muslims for Palestine has been calling for an end to aid to Israel. Now Alhamdulillah (Praise to God) we are in a position to do something about it. Now the American Muslims for Palestine is in Washington, D.C., actually beginning the work with legislative staff in Congress to identify specific military units who receive foreign military financing from the United States."

Szremski also named partnering organizations in its "educational and advocacy work in Congress" that included the U.S. Council of Muslim Organizations and U.S. Campaign to End the Israeli Occupation.

There is no indication AMP is routing money to Hamas. But its rhetoric and ideology, emphasizing "resistance" – a coded reference to armed jihad – and the significant representation of leaders tied to an old Hamas-support network, raise serious questions about its true objectives. This is not a mainstream organization seeking a peaceful settlement to the Israel-Palestinian conflict.