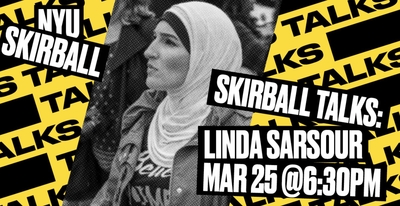 She certainly looked like Linda Sarsour, the flame-throwing Islamist political activist. And the speaker had Sarsour's voice. But the woman who spoke Monday night at New York University's Skirball Center for the Performing Arts seemed entirely unfamiliar with Sarsour's own views.

Arguing that "unity is not uniformity," Sarsour said she's "cool with" people who don't share her views on the Israeli-Palestinian conflict as long as they can work together on other causes.

"It doesn't matter to me who you are," she said. "Come to the aid of people who are the most broken in our country, and that's the thing that I never just understood. I never went to a movement and asked people to fill out a form and say, 'please tell me all your political views.' I mean, that's not how it works."

But that's exactly what she did.

Less than three years ago, Sarsour – who believes "nothing is creepier than Zionism" – told an American Muslims for Palestine (AMP) conference that the fight against what she called a "Muslim registry" didn't have room for people who don't support anti-Israel campaigns.

"We have limits to the type of friendships that we're looking for right now," and those limits involve people who "have been steadfast, courageous, have been standing up and protecting their own communities, those who have taken the risk to stand up and say – we are with the Palestinian people, we unequivocally support BDS [boycott, divestment and sanctioning Israel] when it comes to Palestinian human rights and have been attacked viciously by the very people who are telling you that they're about to stand on the front line of the Muslim registry program."

"No thank you, sisters and brothers."

She drew similar restrictions around people in the feminist movement just a year later in an interview with The Nation.

"It just doesn't make any sense for someone to say, 'Is there room for people who support the state of Israel and do not criticize it in the movement?' There can't be in feminism," Sarsour said. "You either stand up for the rights of all women, including Palestinians, or none. There's just no way around it."

Sarsour warned her audience against forces which seek to divide Jews and Muslims, and Jews and black people.

At no time did Sarsour acknowledge her own contributions to dividing Jews from Muslims and from black people.

Her 2016 AMP speech, for example included her frustration at "Muslims willing to sell Palestine just for a little acceptance and nod from the white man and white power in these United States of America."

Last September, she blamed Jews for police shootings of unarmed black people because of an Anti-Defamation League program that takes police executives to Israel to learn about fighting terrorism and riots. The ADL is the most prominent Jewish organization in the United States.

To Sarsour, this leads directly to "what? Stop and frisk, killing unarmed black people across the country."

She made a similar assertion during a speech in 2015 at the 20th anniversary of avowed anti-Semite and Nation of Islam leader Louis Farrakhan's "Million Man March."

On Monday, the same person accused others of trying to divide Jews and black people.

She also claimed to stand by women in countries like Iran and Saudi Arabia who are fighting compulsory hijab laws. If she doesn't say it often, it's because she's already got too much on her plate, she said. And she endorsed equality for gays, lesbians and transgender people.

There is a place in the Middle East where LGBT people can live safely, can serve openly in the military, and that's Israel. Sarsour doesn't talk about that reality, and Israel haters dismiss it as "pinkwashing," a transparent and superficial decision that is not rooted in equality, but a scheme to make Israel look good.

But contrast that with Palestinian public opinion. A 2013 Pew poll found 93 percent of the Palestinians in the West Bank and Gaza believe society should not accept homosexuality, while 4 percent thought it should. The question didn't go as far as gay marriage – just whether society should accept people.

Sarsour didn't address this or any other way Hamas and the Palestinian Authority serve as obstacles to the peace she says she wants. She twice described herself as "a visionary" Monday night, but received no challenging questions except for those shouted from the audience. The moderator's final question, "What gives you hope?"

We hope her audience didn't fall for this attempt to soften Sarsour's image as accepting and inclusive.