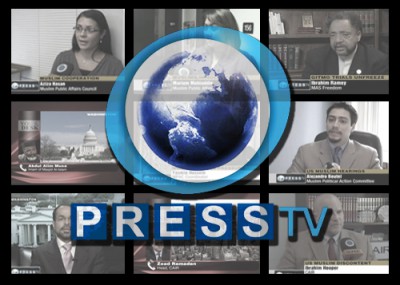 Tune in to Press TV, the Iranian government's English-language broadcast outlet, and you will see reports of the pervasive evil represented by the United States. It seeks war. It fabricated an international report on Iran's nuclear weapons program. It leads an elaborate "Iranophobic" conspiracy aimed at invading Iran and "plundering its natural resources."

Watch long enough and you'll also see a parade of American Muslim activists, all lamenting their problems with government policies and decrying the plight of life here for Muslims.

Both groups claim to stand for civil rights and against terrorism, but their appearances feed into the narrative of the Iranian regime, which is a designated state sponsor of terrorism and a notorious human and civil rights violator.

A review of the appearances finds not one which included any criticisms of the Iranian regime for its oppression of its own people or for its support for terrorist groups. That is not surprising, given that the groups fail to make critical statements about Iran even to American audiences.

When positive things were said about religious freedom in America during Press TV appearances, it was always outweighed by claims Muslims are being singled out for scrutiny or having their rights abused.

"The American Muslims are free to practice their faith," CAIR national spokesman Ibrahim Hooper said in an Aug. 3 interview. "We live in a free society; there are many good things about being an American Muslim. But there is also a sense of being under siege from these hate mongers that are constantly trying to demonize our faith."

"We get calls all the time from individuals who are being coerced to be informants on the American Muslim community and the coercion usually takes the form of immigration issues, tax issues and other personal issues, financial issues that can be brought to bear to force people to become a spy in their own faith community," Hooper said.

"It spoke to a lot of the feelings that I think many Muslim Americans have with respect to their position here in America post-9/11," Beutel said. "We are loyal citizens to this nation and we are trying to do everything we can to keep it safe and secure. And yet even when we're doing the right things and in many cases, laying our lives down on the line for our nation, we still get stigmatized."

MPAC's profile in Washington has grown dramatically, especially when it comes to outreach directly from the White House. MPAC officials attended the White House Iftar Dinner, President Obama's 9/11 Memorial at the Kennedy Center, and Secretary Hillary Clinton's Eid ul-Fitr reception at the State Department, which was planned to commemorate the conclusion of the month of Ramadan.

On July 13, President Obama even called Haris Tarin, head of MPAC's Washington office, to commend his organization's work with the Muslim American community and the nation as a whole.

Both CAIR and MPAC have a long history of denouncing U.S. counter-terrorism efforts and particularly of accusing the FBI and law enforcement of entrapment and lying to Muslims to secure their help in locating terror suspects. For examples, see here, here, or here.

There is no denying anyone's right to appear on any program. But invitations can be declined. It's a mystery what officials of either of these organizations hope to accomplish by criticizing their own country on an official arm of a hostile Iranian regime.

Hooper again criticized the FBI on Oct. 25. That was two weeks after law enforcement disrupted an alleged Iranian-driven assassination plot on U.S. soil targeting the Saudi Arabian ambassador to Washington. And he appeared again on Tuesday, discussing new FBI hate crime data from 2010 showing an increase in anti-Muslim attacks.

The problem, Hooper said, is a conspiracy to issue a constant barrage of bigotry from "a coordinated, well-financed group" against Muslims in America.

If supposedly "mainstream" groups like MPAC and CAIR are comfortable on Press TV, it is no wonder more openly extremist groups embrace the chance to appear on camera.

As-Sabiqun, a Washington, D.C.-based Islamist organization that has openly called for an Islamic state in America by 2050, has provided interview subjects for Press TV five times in 2011. In them, the group's leader Imam Abdul Alim Musa has accused the United States of "fighting a global war against Islam," and entrapping innocent Muslims.

"Americans have become obese and very lazy people, Musa said during a July appearance. "Americans have become addicted to television, internet, and they sit at home. But here is the thing, what we call the fall, and the decline of the American empire is in process. The American empire is so vast that it is an empire that will crumble in on itself. This is happening right now, we don't have to worry about an external rebellion, or an internal rebellion, the US economy is dead. The US military has lost all respect, not only Afghanistan, Iraq and lately Libya."

Representatives from the Muslim American Society (MAS), which was founded as the U.S. chapter of the Muslim Brotherhood, appeared twice on Press TV in the past year. Like its counterparts, they said nothing of Iranian misdeeds but they did defend a convicted terrorist, Sami Al-Arian, and also accused President Obama of contributing to rising "Islamophobia" by failing to close Guantanamo Bay.

FBI agents "are not investigating to see if the individual is engaged, they are engaging the person in terrorist activities, in conspiracies, in plotting," Elsayed said. "Our experience here at al-Hijrah was very positive with the FBI leadership in Washington Field Office, until we found out that getting very close to the FBI came at a very serious price," he added.

On its website, Press TV identifies part of its vision as being "heeding the often neglected voices and perspectives of a great portion of the world" and "embracing and building bridges of cultural understanding."

But Press TV has come under fire before. In January, Britain's National Westminster Bank froze its bank account, presumably as part of an effort to cut off funding for Iranian government enterprises and force the country to abandon its nuclear weapons program.

At the time, writer Shiraz Maher applauded the act as "a welcome development," noting that Press TV "has a long track record in producing agitprop for the Iranian state, including the lie that Neda Soltan's murder by the regime was a hoax."

Iran's leadership again finds itself in the spotlight following the release of an International Atomic Energy Agency (IAEA) report which finds that Iran is progressing toward making nuclear weapons.

Commenting on the report, Press TV echoed the recent accusation of Iranian President Mahmoud Ahmadinejad that the director general of the IAEA, Yukiya Amano, is an American "pawn" reporting what the U.S. government tells him to say.

"In an atmosphere of cringing obedience to Washington, Mr. Amano cannot choose but to play into the hands of the US officials who look over his shoulders and observe with diligence what he puts to paper in the report he writes about Iran," a Nov. 8 Press TV article noted.

Press TV's message today is that America is a terrorist state, and that its actions – from the allegations in the Saudi assassination plot to the saber-rattling over Iran's nuclear program – are either manipulated by Israel or direct favors to the Jewish state.

Thank you very much for the interesting article. This station was recently banned in UK for breaking journalistic rules, hopefully US will follow suit, though I am not hopeful. There are really two broadcasts like this, one is Press TV and another one is Russia Today (RT). After watching them for a couple of programming the extent of bias and hatred toward the American government is very obvious. Hopefully their audience are smart enough to see through it. It is a gathering of IRAN and Islam apologists bellyaching with what is wrong with the United States while they kill their and rape their own citizens daily. I am for freedom of speech, but I am sure that neither one of these countries will want the US to broadcast similar propaganda driven and biased programming against their governments into their country. After all should it not freedom of speech cut both ways? As an Iranian opposition, I would love to show case Iranian regime's reign of terror and violation of human rights without jamming across Iran. But we are too politically correct, to counter their propaganda machine in this country.