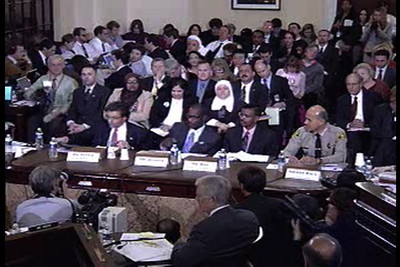 When members of Minneapolis' Somali community realized their sons had disappeared and likely gone back to Africa to join a jihadist group, mosque leaders told them to keep quiet.

If you go to the FBI, you could end up in Guantanamo Bay with alleged terrorists, some were told. If authorities learn about it, mosques in America might be shut down in response. You, the worried relatives were told, will pay for that in the afterlife by being damned with "eternal fire and hell."

Abdirizak Bihi's nephew was among those missing. Burhan Hassan later would be killed in Somalia after joining the al-Shabaab terrorist group.

How this promising A-student grew so radical that he gave up the American dream was supposed to be the focus of a hearing Thursday before the House Homeland Security Committee. The spike in homegrown Islamist terrorism cases in recent years – driven by a targeted recruitment effort of young Muslim Americans by al-Qaida, is a concern for American law enforcement and intelligence officials.

The hearing's focus solely on Islamic radicalization generated criticism in the weeks leading up to it and throughout the more-than-four-hour proceeding.

For all the vitriol, none of the witnesses made any sweeping generalizations about the faith of Islam or about Muslim people. Los Angeles County Sheriff Lee Baca, who again defended the Council on American-Islamic Relations (CAIR) despite documented ties to a Hamas-support network, still commended the hearing's topic and praised fellow panelists as "incredibly important" witnesses.

Joining Bihi and Baca were Melvin Bledsoe, father of a man who claims to be an al-Qaida jihadist, and Zuhdi Jasser, founder of the American Islamic Forum for Democracy.

Bledsoe, like Bihi, described his own family tragedy. His son Carlos grew up happy and well-adjusted, until he was "manipulated and lied to" after converting to Islam by local Muslim leaders who helped him go to Yemen and study with radicals. In June 2009, Carlos Bledsoe, now called Abdulhakeem Mujahid Muhammad, opened fire at a Little Rock, Ark., Army recruiting office, killing one soldier and injuring a second.

His father testified that other "hunters" for al-Qaida and other terrorist groups are trying to recruit more Muslims to join their jihad. He repeatedly stressed that he has other Muslim relatives, whom he described as "modern, peaceful, law abiding people."

He wondered why a conversation about radicalization among Muslims like his own son generated so much angst. "It seems to me that the American people are sitting around and doing nothing about Islamic extremism, as if Carlos's story and the other stories told at these hearings aren't true. There is a big elephant in the room, but our society continues not to see it."

The nation's first Muslim-American congressman, U.S. Rep. Keith Ellison, D-Minn., was the most emotional, appearing to fight back tears as he described false rumors about Mohammed Salman Hamdani, a Muslim paramedic who died on 9/11.

A hearing on radicalism in general would have been acceptable, Ellison said. "When you assign their violent actions to the entire community," he said, "you assign collective blame to the entire group."

Other committee members were outwardly hostile to Chairman Peter King, R-N.Y., and to some of the witnesses. Lee of Texas said the hearing placed the Constitution "in pain" by demonizing an entire community. Oddly, she found the presence of two Muslim witnesses testifying about obstruction from organized Islamic groups – Jasser and Bihi – to be proof that Muslims indeed were cooperating with authorities.

"They are here doing what this hearing suggests they do not do," she said. "I question where are the uncooperative Muslims?"

In this exchange, U.S. Rep. Loretta Sanchez, D-Cal., challenged Jasser's criticism of messages discouraging people to talk to the FBI without counsel.

Speier said she saw little value in the testimony because she did not consider witnesses like Jasser, Bihi and Bledsoe to be experts. "Do you have the expertise" to testify, she asked Jasser.

"That's interesting," he replied. "The theocrats ask me that all the time."

In his testimony, Jasser called for a "counter-jihad" on the Internet and in the community to stress principles of liberty against what he sees as the collectivization and victimization emphasized by Islamists.

"I appreciate the anecdotes," Speier said, "but I don't think they are very enlightening." In the following clip, Bledsoe and Bihi are given a chance to respond.

As the hearing was broadcast, Dawud Walid, head of the CAIR Michigan office, was posting comments on his Twitter feed equally dismissive of the witnesses:

CAIR attracted its own attention during the testimony. King displayed a poster published on the group's San Francisco chapter website, first reported by the Investigative Project on Terrorism, which urged Muslims to "Build a Wall of Resistance. Don't Talk to the FBI."

While CAIR officials later removed the poster and claimed it did not reflect the organization's policies, Bihi singled out CAIR for siding with local religious leaders in discrediting the relatives of the missing Somali men, calling them liars and tools out to destroy the mosque. CAIR discouraged people from talking with the FBI, he said, calling it "a slap in the face for the Somali American Muslim mothers who were knocking on doors day and night with pictures of their missing children and asking for the community to talk to law enforcement about what they know of the missing kids."

CAIR did nothing to help the families, he said. "We are isolated by Islamic organizations."

In his opening statement, King called CAIR "a discredited organization that should be rejected." U.S. Rep. Frank Wolf, R-Va., testified about the FBI's decision to cut off access to CAIR because of its documented ties to a Hamas-support network. Despite that, the group is "routinely and mistakenly elevated in the press as voice of mainstream Muslims" enjoying access to high level government officials.

Baca, who gave CAIR a full-throated and defiant endorsement during a hearing last year, seemed more subdued Thursday. He has "never had briefing from FBI what their position is," he said. His own experiences in California have been positive, but he acknowledged he could not attest to what might happen elsewhere.

At times, members were able to discuss the growing volume of homegrown Islamists terrorists. U.S. Rep. Mike McCaul, R-Texas, mentioned the repeated promotions for Army psychiatrist Nidal Malik Hasan despite displaying an obvious pattern of radicalization. It reached a crescendo in November 2009, when Hasan opened fire at a processing center at Fort Hood, killing 13 people and wounding 32 others. Hasan had been in contact with American-born cleric Anwar al-Awlaki, considered the most influential voice in radicalizing suspects in a string of terrorist plots.

"To ignore this in name of political correctness is a serious threat," McCaul said. "I am concerned there are organizations telling the community not to cooperate with the FBI."

As previous hearings have shown, the sophistication of al-Qaida's appeal to American Muslims is increasing. Whether the issue is a comfortable one or not, susceptible young Muslims will continue to be targeted with messages urging them to strike out against their homeland.

Bledsoe warned the committee that his son's experience should be a cautionary tale for policymakers. "One thing is for sure," he said, "it will happen again."

See all of Bledsoe's statement below.

Do the research, here are just a few books, read:

"The Heirs of Muhammad" by Barnaby Rogerson.

Churches must also be investigated

We have 30million illegal immigrants who have virutally invaded our country and we are spending $400 billion/ year only to sustain public services to the Illegals. AIDING AND ABETTING illegals is a crime. The Catholic church, Assembly of God, PCA(USA) ELCA, UMC and other non profit organizations getting grants from the US Taxpayer such as LA RAZA, One America are violating our laws. Should they also not be investigated for AIDING and ABETTING the Illegals? They are free to provide humanitarian services as people. As far as the law is concerned, they cannot AID and ABET the illegals. Then, they must be investigated and prosecuted. The best way to go will be to REVOKE their TAX Exempt STATUS. Then they will understand the difference between compassion and the LAW.

Maybe the difficulty getting people to understand the specific problem we have with the radicalization of young Muslims is people like the first commenter write (kind of) and open their mouths.

Yes, the Democrats on this committe were childish. But they were trying to divert the point of the hearing and keep the spin going that it is anti-Islam. It's a tactic! They were going to do this regardless of the actual content of the witnesses. Sure, it made them look like fools. As though they weren't actually listening to the stories of the two relatives of radicalized Muslims. And, uh, where were the hearings on skinheads, Klan and neo- nazis when MY Democratic party were in power? Obviously, condemning the focus of this hearing for excluding other political fanatic organizations was a tactic, not a serious concern.

I'd like to forward this article, which summarized the hearings well, to my more liberal friends but I'm afraid comments like the one above will just prevent intelligent folks from taking this seriously.

"The Extent of Radicalization" Among American Muslims

"The Extent of Radicalization" Among American Muslims

The House of Representative's Homeland Security Committeen hearings on the above subject, will be shown in entirety tonight on CSPAN - beginning 7pm PST/10pm EST.

This is very important for every American to watch these proceedings. Dr. Zuhdy Jasser is clear & brilliant! Two heart-broken (and very articulate) family members of radicalized American boys, (1 African-American, and 1 Somali) testified. They were stopped by the clock by Rep. King a few times, but people like Ellison got to go on and on...

And our very own Sheriff Baca was once again brought in to testify by Democrats. He does well when he does not have to take sides. He shore knows how to wiggle out of answering a direct question. He is slick and takes people in with his smooth diplomacy. People will not see the truth about him, just as we didn't at first. He is adamantly pro-Muslim, and attends fund raisers for CAIR!!!

Most Democrats - both on the committee & visiting congresspersons - were ridiculous! They wasted precious time...speaking against the committee, wanting equal time for white supremacist groups, and other subjects...did you know that the "KKK is Christian"?

Jackson Lee (D-Tx) was her usual belligerent out-of-control, look-at-me-narcissistic self. She had the audacity to wave a small folded up Constitution.

Oh to be in theater! Also Laura Sanchez from SoCal was horrid, making inane remarks, with an awful grating voice, and gesturing with awkward (weird) hand movements. Only Lundgren (R) of California made any sense and was a good speaker. The others from California were (are) truly embarrassing.

I wrote to Chairman Peter King, and suggested the committee talk about THE DEATH THREATS HE GOT these past 2 weeks, AND about the serious threats DR. JASSER GETS continuously. America needs to know about this! The International Islamo-fascist movement surely knows all about this aspect of what is going on today. Only criminals & thugs try to frighten people into silence.