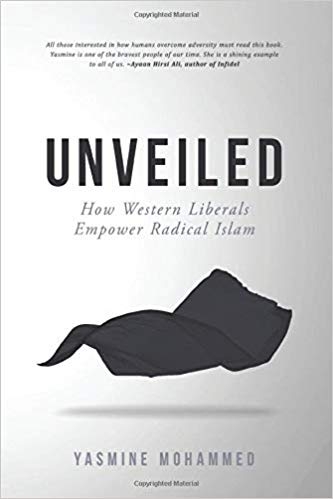 Before Yasmine Mohammed was a voice to free Muslim women of the veil, she was a little girl in Canada, beaten across the soles of her feet until they bled and blistered, any time she missed a word of her readings in the Quran. Before Yasmine Mohammed was giving lectures on human rights at Harvard, she was an abused child told by a Canadian judge that "this is your culture," and while he recognized her suffering, there was nothing he would do to protect her from further abuse. And before Yasmine Mohammed was being heralded as "one of the bravest people of our time," she was forced to marry a man she would later learn was a senior member of al-Qaida, with direct ties to Osama bin Laden.

Unveiled: How Western Liberals Empower Radical Islam is her powerful and courageous story. It is also her warning, and her plea, not to let that story be repeated in the life of any other little girl.

Full disclosure: I already knew much of Yasmine's story. She is a source in my upcoming book on terrorism and domestic abuse, which will be published next year by Potomac Press. But this book is more than just her story. It is what she has come to stand for, and the cause she carries with her.

It is important to understand that hers was not the life of every young Muslim girl living in the West. It is equally important to understand that despite what many of us may think, it is the life of many. Indeed, as Mohammed points out, for some – like fellow Canadian Aqsa Parvez or the Texan sisters Amina and Sarah Said – it can be worse: all were killed by their fathers in the name of "honor." They had committed the crime of becoming "too Westernized."

Still, so horrific are some of the stories Mohammed tells of her abuse – like being tied to her bed before being beaten – that it is almost hard to believe they could be true, save for the verified accounts of people like Arizona-based Aiya Altameemi, whose mother padlocked her to a bed and beat her for talking to a boy classmate after school. In Yasmine's case, the beatings came usually not from her mother (though she frequently facilitated the abuse), but from the man she called "Uncle Mounir" – a married man with whom Yasmine's mother had a long and only somewhat secretive affair as his additional wife under Islamic law. As Mohammed describes him:

"His entrance into our life was truly explosive. No tremble, no warning, no change of wind – just suddenly there, a violent sociopath tearing through our life. He walked into our home like he owned it, with his disheveled beard and his calloused hands. He rarely interacted with me, unless it was to bind my feet to the foot of my bed. I had no idea my mother was a second wife."

It is in this same voice that Mohammed tells her life story, with intimacy and frankness and occasional vivid detail. Reading it is like sitting up all night with a close friend, like the whispers shared on sleepover dates after the lights are out. With her, we experience the anticipation, and crushing disappointment, when her drama teacher notices the bruises on her arms and notifies the police. Their thorough investigation into her conditions inspires her fantasies of living with a foster family, of freedom, only to have a judge rule in her mother's favor.

"The judge ruled that corporal punishment wasn't against the law in Canada," she writes, "and due to our 'culture,' sometimes those punishments can be more severe than in the average Canadian household. The scariest thought crouching in the back of my mind became a reality with one swift smack of a judge's gavel. I have never felt so betrayed in my life."

That decision is also what explains Mohammed's subtitle. "The need to seem woke supersedes the need to save actual children from abuse," she says. "In their effort to be 'culturally sensitive,' my own country ended up being viciously bigoted toward me instead. I knew that if I had come from a family of 'white' parents, I would have been protected."

But with her, too, we live the joyful, if brief, period of freedom she enjoys living alone in her teens in Egypt. We share her extraordinary friendship with Tiffany, who encouraged her to defy the myths and threats that had always served as cage bars on her life: to walk into the bathroom with whatever foot came first, for instance, and discover she does not become possessed as a result; to question the rituals of her prayer.

"Why did your finger just have a spasm at the end there?" Tiffany asks her.

Together with Mohammed, we also experience the horrors of her marriage to her terrorist husband, his beatings, his evasiveness, his control, and her own mother's bizarre attraction to him; the joys of the birth of her daughter, whose life gives her the inspiration and the strength to escape; we delight in her second marriage, however brief, to a man who truly loves her, providing her, for the first time, with a sense of her own worth. Along the way, she offers us insights into the culture of fundamentalist Islam, and the ideas forced into her life at childhood –ideas she eventually found the strength to cast away.

"The most important aspect of honor is a girl's virginity," she explains. "It must be guarded at all costs. Girls must not ride bikes, horses, or engage in sports lest the hymen break. Families must keep a close eye on girls making sure they do not demolish the family honor by losing their virginity – whether they do this willingly or because they were raped is irrelevant. The aim is to ensure, like a vitamin bottle, that their 'seal' is not broken before they are delivered to their husbands."

It is a scathing indictment.

But ultimately, having followed her through the pain and confusion of those early years, we find ourselves standing with her as she removes her hijab, first in private, then in public, and finally, before her mother, facing her, unveiled. For the first time, her mother's threats do not intimidate her. For the first time, she is unmoved by her cries of "filthy prostitute!" and warnings she will kill her. "I won't risk leaving you alive to leave Islam," her mother screams. "I will kill you before that happens. You will not drag me to hell with you."

Now, a newly strong Yasmine only shrugs. This was in 2004, she tells us. She has not seen her mother since.

Yet if Mohammed's bitterness is palpable in the first half of the book, so, too, is her sense of hope at the close. Hers is a long struggle into the light; but with it she has found a purpose – to bring the same freedom and light to others – both by inspiring and encouraging them, and by urging non-Muslims to do the same. It is this drive, ultimately, that motivated her to found "No Hijab Day," her response to "International Hijab Day," on which Muslim conservatives urge women around the world to lend support to the veil by wearing a hijab.

In Mohammed's version, women are supported for their courage to remove the veil, instead. It is a gesture that in many countries can lead to imprisonment, even death. Yasmine Mohammed's dream is that with enough encouragement and reinforcement, eventually so many women will free themselves of being covered that they can no longer be controlled or stopped.

But this, she warns, will require galvanizing championship from the non-Muslim community, particularly those who call themselves feminists – and it isn't happening. Rather, she says, "instead of celebrating the brave freedom fighters who just want their personal liberty, the West celebrates the exact things these women fight against." Worst of all, Mohammed argues, are the corporations and Western feminist groups who instead "support the people who [want] to keep these brave women down.... Marks & Spencer, one of the UK's largest department stores, and Banana Republic sell hijabs for girls... In Saudi Arabia, women are burning their niqabs. In Iran, women tie their hijabs on sticks and sway them silently, defiantly in the streets as they are arrested in droves. In the West, we put a Nike swoosh" on them.

And so Mohammed, who in these pages recreates her own personal suffering from exactly this kind of oppression, now turns her life to ending it. This memoir is her call against the hypocrisy of those who fail to stand beside her. After all, she asks, "how can we fight Western patriarchy while simultaneously supporting Islamic patriarchy?"

Above all, Yasmine Mohammed urges, "Women in the East must work together, and women in the West – please reach back your hand and pull women in the East up the road to equality with you. Anyone who believes in freedom and equality, please support the freedom fighters in Muslim-majority countries. They need you."

One strong way to begin: to read this compelling and important book.