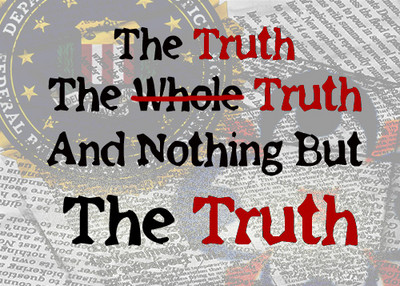 Imagine a news story on the problems posed by steroid use in sports. It includes comments from former baseball player Barry Bonds, who argues that professional sports leagues and Congress need not investigate the matter because the players can police themselves.

It notes that Bonds has had "a contentious relationship with Major League Baseball due to suspicions he was a steroid user himself, a charge he denies." But the story doesn't say anything more about the basis for those suspicions, omitting reports of failed steroid tests and a perjury indictment for allegedly lying to a federal grand jury about his steroid use.

That story might be considered balanced – it reports the general allegation and the denial. But it's woefully incomplete and the outlet which published it likely would meet some ridicule. There's a detailed record available to challenge Bonds' denial that is not presented to readers.

Yet, that's the routine when it comes to the media's treatment of the tense relationship between federal law enforcement and national Islamist organizations - the Council on American-Islamic Relations (CAIR) in particular. That tension derives from the FBI's decision to cut off routine communication with CAIR and from a series of counter-terror investigations targeting Muslim charities linked to terrorists or involving the use of FBI informants in mosques.

A series of such stories has appeared in the past week. They share a reliance on the grievances voiced by national Islamist organizations and a scarcity of facts that rebut many of those concerns.

The record on charities has been overwhelmingly supportive of the government. If a charity is sending money to Hamas, Al Qaeda or other groups designated as terrorist organizations by the United States, Muslim ire should be pointed at those who misused their charity, not at those who enforced the law.

On informants, news outlets often cite anecdotal accounts of people who claim they were strong-armed into becoming informants. The allegations usually involve claims that immigration status is threatened unless someone agrees to become a snitch. Or, the claim is that the informant created the plot that lead to charges, and the defendants are dupes who got entrapped.

None of these claims have been proven. But they are part of a deeper agenda that creates obvious law enforcement resentment. That objective is to get investigators to stop infiltrating mosques, thereby creating a sanctuary for those with bad intentions.

While Luqman Abdullah's mosque in Detroit may have participated in charitable work, an informant's information showed it clearly was used for training in martial arts and with weapons. Abdullah advocated violence in pursuit of his dream of an Islamic state in America. He "preached that every Muslim should have a weapon, and should not be scared to use their weapon when needed," an FBI affidavit said.

Agents shot and killed the imam after he refused to surrender for arrest and fired his gun, killing an FBI dog.

In North Carolina, Muslim convert Daniel Patrick Boyd preached violence at the same time he plotted to wage jihad at home and abroad. He is accused of conducting reconnaissance for an attack on the Marine base at Quantico, Va. Recordings by informants played a key role in the arrests.

Stories about the tensions between the FBI and Muslims are devoid of such examples.

The omission is clearest when it comes to the media's treatment of CAIR, which spent much of the past two months in the news responding to the Fort Hood massacre and then trumpeting its role in connecting the families of five young men seeking to join the jihad in Pakistan with the FBI.

The FBI cut off routine communication with CAIR last year, saying it could not be considered an appropriate liaison partner "until we can resolve whether there continues to be a connection between CAIR or its executives and HAMAS."

CAIR's founding relationship with Hamas was documented in evidence used to convict five men tied to the Holy Land Foundation for Relief and Development (HLF) in 2008. Exhibits show CAIR was part of a Hamas-support network in the U.S.; that its founders were on the network's telephone list and participated in a 1993 meeting of Hamas supporters interested in derailing U.S.-led Middle East peace efforts.

A federal judge in Dallas has rejected CAIR's request to be removed from the unindicted co-conspirator list in the HLF case, which ended with guilty verdicts on 108 counts.

Here's how National Public Radio's Scott Simon opened a December 12 interview with CAIR spokesman Ibrahim Hooper: "It's important to know that there's been a contentious relationship between CAIR and the FBI in recent years."

"The F.B.I. said it was motivated by council [CAIR] executives' failure to answer questions about links with the Palestinian militant group Hamas. The executives denied any such connection, and accused the F.B.I. of staining the council's reputation without due process."

A Lexis search shows the Times has cited CAIR officials 50 times since 2005, including a story about its opposition to the co-conspirator designation. It has never devoted a story to the HLF evidence linking CAIR to Hamas.

A story from Sunday's Washington Post raised the tension issue, too, but did not mention any of the skeletons in CAIR's closet when it quoted Executive Director Nihad Awad. His statement, however, offers a hint of how Islamists fuel the tension with law enforcement. Awad argues the five U.S. students arrested in Pakistan should not face criminal charges if returned to the U.S.:

"The government has to show some appreciation for the actions of the parents and the community. That will encourage other families to come forward."

It's an interesting idea – amnesty for crimes reported by the perpetrators' families. Would Awad apply the same concept to drug dealers or bank robbers?

The article also quotes an official at the American-Arab Anti-Discrimination Committee (ADC) who said charges against the five would be accepted, unless the case emphasizes the ideology that motivated the men to seek death fighting American forces.

"If the FBI and the prosecutors say these were five Muslims and they were trying to commit jihad, and they throw out all of these incendiary religious terms, that's different," ADC legal director Nawar Shora said.

The follow-up question – Why? – is not pursued. Assuming they have the evidence to bring charges, how can prosecutors make a case without explaining the motive? Even CAIR acknowledges that one of the men left behind a farewell video invoking Koranic passages and indicating "that young Muslims have to do something" to defend their fellow Muslims.

A Press Trust of India report quotes the Pakistani police chief in the town where the young men were arrested saying the five regret nothing except "that they could not lay their lives while also killing some 'US imperialists.'" Since they couldn't die on the battlefield, Ramy Zamzam told authorities "we want to become martyrs in another way. Hang us."

Skepticism is an important trait for any reporter. In these cases, however, it too often is a one-way street. The complaints by law enforcement critics are accepted at face value while legitimate questions about those speaking the loudest are overlooked.

That's out of balance.

Baraka Allahu fik!! thank you for uncovering these double-faced islamists. You have no idea how many Muslim-Americans out there are fed up of CAIR and their fellow Saudi-funded groups. These orgs are radicalizing our kids, tarnishing our name and making other Americans suspicious of us.

You are right, main stream media gives these Islamists a pass because many of them are too afraid of being called racist if they were to ask tough questions. The reality is, that sooner or later, CAIR will be taken to task, not only for their HAMAS ties, but for tarnishing the image of Muslims in this country through their antics and ridiculous positions. Sooner or later..

Keep up the good work Steve

I am always so impressed at your dilligence and insight into the Muslim Extremist movements throughout the world. So many people in the US are so naive in their understanding of what is really going on in this Jihad. They are so passive now that 911 is so far in our rear view mirror. They simply don't want to continue to be on guard in this struggle and just wish that it would all go away. Keep up your excellent work of keeping us informed!