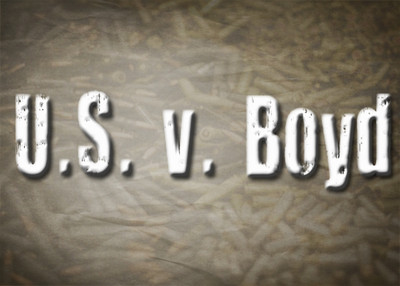 Along with a cache of weapons and ammunition, federal agents seized a host of military gear, manuals, articles about the September 11 attacks and "Militant Islamic documents" and "militant books" during a search at the North Carolina home of terror-suspect Daniel Patrick Boyd.

According to the search warrant unsealed Tuesday, items seized from Boyd's Willow Spring home and four vehicles included close to $14,000 cash and "documents, photos, articles, from time spent in Afghanistan," where Boyd is reported to have joined with the mujahideen to fight the invading Soviet Army in the late 1980s.

Other items taken during the search included such titles as The Communist Manifesto; Jihad in Islam; and In the Shade of the Qur'an, a book written by Muslim Brotherhood luminary Sayyid Qutb. Agents also seized a book described in their index attached to the warrant as "the palestinians holocaust (sic)."

Boyd and seven other men, including two of his sons, are charged with planning to murder, kidnap, maim, and injure persons in a foreign country. Seven of the eight defendants charged in the conspiracy were denied bond and will remain in jail until their trials. If convicted, each could face life in prison. An eighth suspect was arrested in Pakistan in October but his whereabouts are unknown.

Also on Tuesday, federal authorities released their search warrant for co-defendant Hysen Sherifi. Items seized from Sherifi's Raleigh apartment included unspecified VHS tapes and books listed as Call to Jihad, Purification of the Soul, and Can Democracy Survive the World between Jihad and McWorld?

During a bond hearing earlier this month, the FBI case agent said 24 guns and more than 27,000 rounds of ammunition were seized from Boyd. Agents found a trench under a deck at Boyd's home that witnesses said had been used to store weapons. Although his attorney denied it, Boyd reportedly moved in a threatening manner toward a gun in his waistband when arrested last month.

The Boyd indictment alleges that he tried to enter Gaza in 2006 "in order to introduce his son to individuals who also believed that violent jihad was a personal obligation on the part of every good Muslim." The indictment states that Boyd, his son Zakariya (one of two of his sons indicted the case) and co-defendants Ziyad Yaghi and Mohammad Omar Aly Hassan traveled to Israel in June 2007. They wanted to die as "martyrs in furtherance of violent jihad," according to the indictment. But they returned a month later having failed in their effort to perform jihad.

At the August 4 detention hearing, FBI agent Michael Sutton quoted statements by Boyd that were reported by witnesses or secretly recorded by the government. "If I don't leave this country soon," Boyd said, "I am going to make jihad right here in America."

Government hearing exhibits in the case strongly suggest that the importance of performing jihad - whether in the United States or abroad - was a constant theme for Boyd, the alleged leader of the terror cell. In a June 10, 2009 conversation during a training session, for example, Boyd said that India would be driven out of Kashmir. According to Boyd, "Those Indians will run for their lives when the real mujahideen come. You can't imagine man when one day the brothers for the Shahada [martyrdom] are coming after you."

In a June 26, 2009 recording, Boyd is heard telling his wife Sabrina and other members of his family that Muslims have allowed their wealth, blood and honor to be taken away from them. As an example, he said, they had permitted American troops to occupy Mecca and Medina and enabled Israel to occupy Al-Aqsa Mosque in Jerusalem.

The blood of the Muslims has become cheap in the world market because Muslims have abandoned jihad, Boyd adds.

In another recording with his family members that day, Boyd exhorts his family to martyrdom, telling them that martyrs' sins will be forgiven and that from the first drop of their blood they will be saved from the punishment of the grave.

In a July 3, 2009 discussion, Boyd talks about how people – including the FBI, CIA and nonbelievers -- are trying to frighten Muslims out of Islam and away from obeying Allah. Boyd says he is afraid to go to local mosques because he will be tempted to physically assault worshippers who think he is too radical. He says that Muslims who think that it is acceptable to remain in the United States without actively working for jihad "have left Islam."

In short, the U.S. government is laying out its case that Daniel Patrick Boyd and his associates had the motivation to engage in jihad and were amassing the weapons necessary to carry it out.