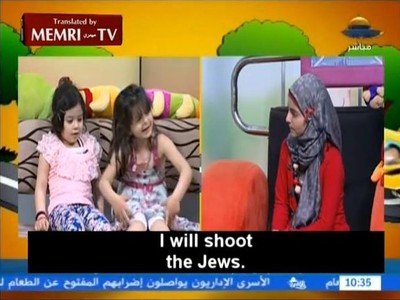 Every day, hundreds of millions of children in more than 120 countries settle in to watch their local versions of "Sesame Street" or similar shows inspired by the Muppet model. They learn to read, to write, to count. They learn about things like "sharing," and "friendship," and how to be kind to others. They learn what it is to love.

Except in Palestine, where the lessons from Hamas children's television are aimed at something else: to kill.

Take, for instance, "Pioneers of Tomorrow," with its fluffy talking bee who encourages viewers to "throw stones" at Jews, and a pretty young host who, in one episode, praises a little girl for her desire to be a police officer and "shoot Jews." Or consider the show's transformation, some years ago, of Mickey Mouse, into an Islamic supremacist character named Farfour. When international protests erupted, producers gave Farfour an honorary farewell: in his final episode, he is "martyred" by Israelis.

For years, reports have emerged of children's programming in the Palestinian Territories, mostly on Hamas-run Al-Aqsa TV, whose shows often teach Palestinian children not just to hate Americans and Jews, but to kill them –preferably through acts of martyrdom, or suicide bombings. As the New York Times reported in 2009, when "Sesame Street" announced plans to broadcast in the region, "The official Hamas channel, Al-Aqsa television, has several children's shows, and Al-Aqsa's director of children's programming, Abu Amr, told me the network is considering starting a station devoted entirely to children. Al-Aqsa TV's most famous (and infamous) children's program is 'Tomorrow's Pioneers,' in which Saraa, a Palestinian girl, and several animal characters teach ideological lessons: why it is bad to speak English and good to memorize the whole Koran; how the Danes are infidels who should be killed. Occasionally an animal character will die as a martyr for Palestine."

Other programs, both for children and for adults, have also included children who speak glowingly of their suicide-bomber fathers and promote violent jihad, according to the Anti-Defamation League (ADL). In one such show, the ADL says, "One of the girls said 'I want to fire missiles at the Jews and be martyred like my father.' One of the boys also said that he wants to follow in his father's path, 'I want to follow the path of Jihad like daddy and I want to be martyred like daddy.'"

And then there are the programs that don't just teach hate, as the Israeli Ministry of Foreign Affairs reported in 2007:

Palestinian children in Hamas-controlled Gaza are being taught to take an active role in terrorist operations against Israel and are thus placed in mortal danger by those who should be responsible for their safety and well-being. The children, too young to fully understand even the meaning of death, are taught to aspire to such "martyrdom" in children's television shows produced by the Hamas.

Every Monday afternoon Al-Aqsa TV, the Hamas' main television station, broadcasts a children's program called "The Gifted". In a special episode marking the beginning of the school year, a two-year old toddler named "Ahmad" was featured. Ahmad was praised for his expertise in the area of "holy war" (jihad).

Interestingly, many of the recent Al-Aqsa programs, including the 'Pioneers of Tomorrow" episode praising the little girl who hopes to grow up and shoot Jews, are in fact reruns of shows first broadcast as long as nine years ago – an effort, it would seem, to reach a new generation of impressionable minds.

Unsurprisingly, such programming is not unique to Palestine: Iranian children's shows have also been known to glorify suicide bombings, while Al Aqsa programming continues to be broadcast in other countries in the region, including Saudi Arabia.

But more significantly, Al-Aqsa programming now reaches into Europe, thanks not only to satellite access, but to European mosques which serve as broadcasting centers.

The result? "It is hard to overlook how hatred imported from Beirut and Gaza resurfaces in the form of daily acts of anti-Semitism in schools and athletic clubs, on streets and in the subway," German magazine Der Spiegel reported as far back as 2008. "Young children raised to be anti-Semitic are already using the phrase 'You Jew!' as a derogatory expression in kindergartens and on playgrounds. Schoolchildren berate their teachers, calling them Jew dogs, for not offering Sharia-compatible instruction, and Jewish schoolchildren are attacked and feel compelled to switch to Berlin's Jewish high school and to hide the insignia of their Jewish faith -- the yarmulke and the Star of David -- when in public."

That a government anywhere would actively advocate murder, genocide, and terrorist activity, training children as young as four years old to hate and kill, is almost inconceivable. But it seems equally unfathomable that the international community now seeks to legitimize such a government. And it's not just about the astonishing lack of outrage in much of the mainstream media (this, while one can scarcely imagine the same shoulder-shrugging if such programs were instead aimed at killing Muslims– or anyone else, for that matter; can you imagine the outrage, the lawsuits, the threats we would hear from the Hamas-affiliated Council on American Islamic Relations [CAIR]?).

Nor is it just about upgrading the status of the Palestinian territories in the United Nations, an organization that defines itself as "committed to maintaining international peace and security, developing friendly relations among nations and promoting social progress, better living standards and human rights." It is about continuing to support the notion that the Palestinian government is simply seeking the "freedom" of its people.

Because the fact is that Hamas's Al Aqsa, and the spread of its hate-filled programming, puts the lie to the (naïve) notion that this is all simply about Israel and Palestine, that it's all about human rights and justice and a pursuit of some kind of peace. And yet despite this, the West's ongoing faith in a Palestinian state, in "unity," continues to ignore the basic foundations of its politics and values – values which aim to contaminate, like a plague, the entire next generation – and not just of Palestinians, but of Muslims everywhere.

But it isn't just Hamas's fault: it's ours, too. We in the West – including (if not especially) the United Nations – must begin to understand the "war on terror" as a war most of all on propaganda – and arm ourselves accordingly. If there is to be a "Sesame Street, Palestinian Edition," then such a program must begin to employ the same methods of teaching justice, tolerance, and truth that make it so valued by parents in America and Europe. And other private enterprises, along with government projects, are going to have to do the same – not just in the interest of securing our own world today, but as a promise to the children of tomorrow.

The adults responsible for all aspects of broadcasting and showing this material to children are guilty of mass child abuse which is clearly a violation of international law and human rights law. The International Court in the Hague should be prosecuting those responsible for these broadcasts now. As long as this practice continues there will never be peace in the Middle East. It is difficult to impossible to undo the damage caused by training little children to hate or to be willing to be suicide bombers. I could call this many awful names but the bottom line is that it is child abuse plain and simple and a violation of the human rights of the children who are being brainwashed with this crap. The next time they bomb these places they need to target all of the locations where these awful TV shows are produced and broadcast.

the United States and Britain were the driving forces behind removing the Palestinians from their homes after World War II and moving the Jews into their what had been their territory.

To the Jewish people it was a homecoming of mysttical proportions....to the Arabs who had lived their for 1900 years.....since the diaspora of the Roman Empire in the first century......it was just another invasion they have had to endure and they are still in the middle of the invasion and fighting it.

To the Israelis and Christians you read the bible or torah and find a command from god telling you go kill anyone who does not believe. it is in Luke 19:27 where Jesus said "bring me those who do not accept me as king and behead them".

Someone needs to send the United States Air Force the grid coordinates for this television station so we can stop the lunatics from teaching more kids to be crazy. One Cruise missile and the tv station will no longer transmit.