Hasan and the Big Lie: U.S. "War" Against Islam 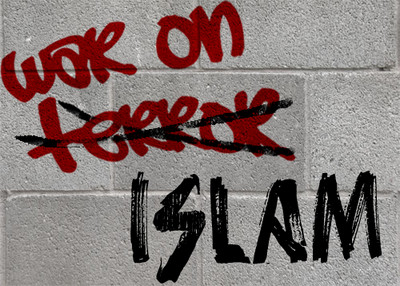 When an American-born radical Islamist cleric chose to praise last week's Fort Hood shooting spree by Army psychiatrist Nidal Malik Hasan, part of the rationale was that no Muslim could faithfully serve the U.S. armed forces.

To Imam Anwar Al-Awlaki, that's because "The US is leading the war against terrorism which in reality is a war against Islam."

A 2006 Canadian study of radicalism concluded that this theme is a potent tool in recruiting Muslims and turning them into violent extremists. The Canadian Security Intelligence Service (CSIS) report was on youth radicalism and Hasan is a 39-year old with advanced college degrees.

Associates are stepping forward with accounts showing that Hasan was frustrated by what he saw as an American war against his faith.

The Washington Post obtained a copy of Hasan's June 2007 presentation at as part of his residency program at the Walter Reed Army Medical Center. Among the statements that disturbed his colleagues, Hasan declared that "It's getting harder and harder for Muslims in the service to morally justify being in a military that seems constantly engaged against fellow Muslims."

A student who took an environmental health class with Hasan at Uniformed Services of the Health Sciences in Bethesda describes him as someone who believed the United States was waging war against Islam. At the end of the class, all of the students had to give a presentation. Many wrote about course-related topics such as dry-cleaning chemicals and mold in homes, Lt. Col. Val Finnell said.

But Hasan (who told classmates he was "a Muslim first and an American second,") chose instead to write about the wrongness of the war on terror. A former classmate told the New York Times that Hasan gave a PowerPoint presentation approximately one year ago entitled "Why the War on Terror is a War on Islam."

Hasan has not been charged in the shootings which left 13 people dead. Sources have indicated he will face a military court martial for murder charges that could bring the death penalty.

According to the CSIS report, "the perception that Islam is under attack from the West" is the most important factor in persuading would-be jihadists that they must preemptively and violently defend Islam from these perceived enemies.

According to a summary of the report's findings:

"A few will act on these events and support or carry out terrorism in an attempt to change Western foreign or military policy. These individuals take the violent defense of Islam as a personal goal and religious obligation."

The idea that the United States is fighting a war against Islam has been advanced by Osama bin Laden, who has cited Western efforts to isolate Hamas and support for a peacekeeping force as evidence of a "Zionist-crusaders war on Islam." Awlaki, a former spiritual leader at Dar al-Hijrah mosque in Falls Church, Virginia, works to encourage jihadist activity with online lectures from his home base in Yemen.

Awlaki, may have crossed paths with Hasan, who attended Dar al-Hijrah in 2001. U.S. officials knew Hasan sent 10 to 20 messages to Awlaki last year and this year, but counterterrorism officials said these were consistent with a research project Hasan was conducting on post-traumatic stress disorder.

In praising Hasan as a hero, Awlaki called him "a man of conscience who could not bear living the contradiction of being a Muslim and serving in an army that is fighting against his own people."

While American Islamist organizations are quick to condemn the Fort Hood massacre and are desperately trying to cast it as a mere criminal act, they have fueled the U.S. "war on Islam" canard since 2001. It has been used to squelch serious debate over their behavior and to discredit virtually all U.S. government efforts to combat Islamist terror. It should come as no surprise, though, that some jihadists hear this and feel compelled to "respond" to the imaginary threat.

Leading the pack is the Council on American-Islamic Relations (CAIR), which routinely casts federal investigations and prosecutions involving alleged terrorists and financiers as a war on Islam.

CAIR is by no means alone in this propaganda campaign. Officials with the Muslim Students Association, Islamic Society of North America and Muslim Public Affairs Council all have repeated the theme.

It's a little ironic that counter-terror policy is viewed as an attack on Islam when CAIR and other Islamist groups immediately seek to remove religious motivations from terrorist attacks like Hasan's, and others.

No one is saying people can't disagree with U.S. policy and tactics in the fight against terrorists. At some point, though, the critics need to assess whether their approach does more harm than good. Few things have been more harmful than Hasan's rampage.