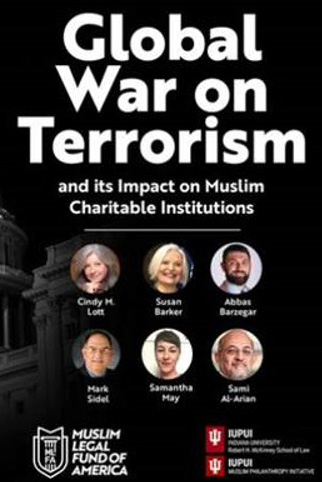 Every so often, Sami Al-Arian emerges to opine on some domestic issue, reminding us of two things: He's an inveterate liar who continues to whitewash his years of service to the Palestinian Islamic Jihad (PIJ). And a disappointing number of American academics are willing to ignore that record and treat him as a credible voice.

Al-Arian joined academics and attorneys last Wednesday for a webinar on "Global War on Terrorism and its Impact on Muslim Charitable Institutions." It was sponsored by the Muslim Legal Fund of America (MLFA) in collaboration with Indiana University's McKinney School of Law and its Muslim Philanthropy Initiative.

MLFA's willingness to elevate Al-Arian at least is consistent. It helped fund his defense on terrorism related charges and criminal contempt. But why did two Indiana University branches see merit in lending their school's prestige to a man recorded exhorting an audience with "Jihad is our path ... Victory to Islam ... Death to Israel"?

He meant it literally, telling his own 2020 academic meeting that the Muslim world "cannot realize its full potential without defeating and dismantling the Zionist project."

No one on the MLFA/IU panel mentioned Al-Arian's documented role on the PIJ shura council, or governing board, or the many times he publicly lied by denying any connection to the terrorist group.

Moderator Cindy M. Lott, director of Indiana University's PhD. program in Philanthropic Leadership, described Al-Arian as "extraordinarily well known. He is the director of the Center for Islamic Global Affairs and Public Affairs Professor at Istanbul Zaim University in Turkey. He has numerous publications in many interrelated fields including education, research, religion, interfaith and he is coming at us today specifically around the areas of civil rights and human rights."

But Lott was selectively dishonest in how she represented Al-Arian.

After pleading guilty in 2006 to conspiring to provide benefits to the PIJ, presiding federal Judge James S. Moody called Al-Arian "a master manipulator. You looked your neighbors in the eyes and said you had nothing to do with the Palestinian Islamic Jihad. This trial exposed that as a lie. Your back-up claim is that your efforts were only to provide charities for widows and orphans. That, too, is a lie. The evidence was clear in this case that you were a leader of the Palestinian Islamic Jihad. You were on the board of directors and an officer, the secretary. Directors control the actions of an organization, even the PIJ; and you were an active leader."

During Wednesday's webinar, University of Wisconsin law professor Mark Sidel offered a different description of his colleagues, including Al-Arian. He thanked the organizers for including him on "this extraordinarily distinguished, other than me, group of participants and speakers."

Al-Arian did run a charity. The Islamic Concern Project, also known as the Islamic Committee for Palestine (ICP), was incorporated in 1988 to pursue "the concept of brotherhood, freedom, justice, unity, piety, righteousness and peace" through "charitable, cultural, social, educational and religious" programs, records show.

But in private fundraisers, the ICP served a different mission.

"It is the active arm of the Islamic Jihad Movement in Palestine," Cleveland Imam Fawaz Damra said while introducing Al-Arian during a videotaped 1991 fundraiser. "We preferred to call it the 'Islamic Committee for Palestine' for security reasons."

At the same event, Al-Arian urged his audience to give money to support the jihad.

At another event, Al-Arian asked, "Have we forgotten the Jews and who they are?" God "made [them] into monkeys and pigs ... had cursed in this world and in the hereafter, and had imposed a punishment on them in this world until Judgment Day."

The MLFA/IU panel, like virtually every group to host Al-Arian, did not find any of this pro-terrorism/antisemitic speech relevant in deciding whether to invite him. Nobody thought to ask how he can reconcile the two diametrically opposing images of his work. Rather, they let him spin more yarns of his own victimization.

When law enforcement takes an interest in organizations like his, Al-Arian told them Wednesday, it is because of politics.

He pointed to the Holy Land Foundation for Relief and Development (HLF), at one time America's largest Muslim charity. HLF, Al-Arian said, "was targeted for political reasons, and its impact was to instill fear and chill charitable giving in the U.S. These are some of the tactics used by the law enforcement agency to keep the American Muslim community on edge."

"The government didn't like the politics of many Muslim groups or charities at the time ... or their potential to impact policy change, so that they were targeted."

In fact, internal records seized by the FBI proved that HLF was part of a broader network of Hamas-support groups in the United States, much of which was set up by the Egyptian Muslim Brotherhood and then-Hamas political leader Mousa Abu Marzook. HLF events routinely featured Hamas officials as speakers, and songs and sketches praising Hamas.

A jury convicted HLF and five former officials of illegally routing $12 million to Hamas-controlled charities. The U.S. Court of Appeals for the Fifth District upheld the verdict.

The investigations into HLF and Al-Arian's ICP proved that Hamas and PIJ had senior political leaders operating in the United States during the 1990s. They each sought to help the respective terrorist groups politically and financially.

Al-Arian repeatedly brought the PIJ's spiritual leader, Abdel Aziz-Odeh, to the United States for conferences and fundraisers. He also helped secure a visa for then-No. 2 PIJ leader Ramadan Abdullah Shallah to work at a Tampa think-tank.

When Shallah was appointed the PIJ leader in 1995, a position he held until 2018, Al-Arian lied to the public and claimed he had no idea Shallah was part of the terrorist group.

"People should recognize that if we knew (his background) we would never have put ourselves in this situation," Al-Arian told a reporter. "If this guy was really high enough to be elected the leader of Islamic Jihad, we wouldn't be fool enough to put him in as director of anything."

But internal communications intercepted by the FBI show Al-Arian knew exactly who Shallah was. Al-Arian spent most of 1994 fighting to keep the PIJ alive, including detailed conversations about funding and exchanges with PIJ founder Fathi Shiqaqi.

Al-Arian twice has appeared on an online radio program hosted by an antisemitic conspiracy theorist. The host claimed 9/11 was "remote controlled hijacking" using empty planes to benefit Zionists in their quest to control American policy.

Al-Arian expressed no discomfort with his host's antisemitic blather. Instead, he said he hadn't looked into it enough, but "a lot of my friends subscribe to this" conspiracy theory.

That's the kind of fringe rhetoric that can result in an academic being shunned by his peers. But not when it comes to Sami Al-Arian.

He repeatedly touted a year-old report called "The Terror Trap," and described proposed legislation aimed at inhibiting law enforcement's ability to investigate charities that might fund terror. The report, written and edited by Al-Arian and two of his children, also ignores his history with the PIJ. It also fails to mention any post-9/11 jihadist terror attacks in the United States that were motivated by an Islamist ideology.

He has no sponsor for the Entrapment and Government Overreach Relief Act, he acknowledged Wednesday. "Right now, we have a bill that hasn't been introduced," he said. His daughter, Leena, first announced the hunt for a sponsor in 2019.

The question is whether he and his allies on the panel and elsewhere can rope a member of Congress into sponsoring such legislation, knowing it likely would be doomed from the start. There are some who might see Al-Arian behind it and run for the hills, but all it takes is one sucker to sponsor the bill.

He might have a better chance if academics were able to introduce legislation.

As the Indiana University-backed program again makes clear, too many academics are not interested in acknowledging or pursuing the truth. This event, and its legitimizing of a terrorist, is hardly an aberration.