Al-Arian and the Georgetown Gang Ride Again – Now in Turkey 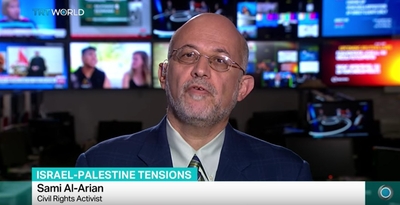 Palestinian Islamic Jihad board member Sami Al-Arian appears to be thriving in his new environs after his 2015 deportation from the United States.

He is scheduled to speak next month at a conference in Istanbul sponsored in part by his old pals at Georgetown University's Saudi-endowed Alwaleed Center for Muslim-Christian Understanding. Center Director John Esposito, a Muslim Brotherhood apologist, also considers himself a "very close friend" of Al-Arian's. And as we noted last spring, family ties strengthen the Al-Arian/Georgetown connection.

Al-Arian was deported to Turkey in 2015, pursuant to terms in his 2006 guilty plea connected to his Palestinian Islamic Jihad support. A computer scientist by training, he now works as "director of the Center for Regional Politics at Istanbul Sabahattin Zaim University."

His conference biography casts him as a civil rights activist and thinker. It is silent about Al-Arian's documented role as secretary for the Palestinian Islamic Jihad's Majlis Shura, or board of directors. It also omits a 1991 introduction of Al-Arian captured on videotape in which he speaks after being described as the head of "the active arm of the Islamic Jihad Movement in Palestine" in the United States.

It may be part of a public comeback Al-Arian is staging as he starts a new life in Turkey and supports its Islamist regime. Following the failed coup attempt, Al Arian offered his analysis on its suspected instigators, twice hinting that Israel was connected to it. TRT World – Turkish Radio and Television – is an active arm of the Turkish government which incurred harsh criticism over its coverage of the coup attempt.

Al-Arian appeared on TRT World again in July, opining on the favorite Islamist topic of Jerusalem's Al Aqsa Mosque and identified as a 'civil rights activist & writer." First, he rationalized a terrorist attack that killed two Israel police officers, both of whom were Druze Arabs. Then he repeated the false and incendiary claim that, "This right-wing Israeli government has been trying for many years now to partition Al-Aqsa Mosque. And this is where this whole episode – this whole crisis – was created."

Next month, Al-Arian will speak at the Istanbul "International Conference on The Muslim Ummah," sponsored by Georgetown's Alwaleed Center along with Qatar's College of Islamic Sciences, Hamad Bin Khalifa University. His presentation is called, "The Challenge of Settler Colonialism in Palestine/Israel."

Al-Arian also is slated to lead the conference's final session, which features Ramadan, Kalin and Esposito discussing "The Muslim Ummah in Today's World."

The Oct. 8 conference is called, "International Conference on the Muslim Ummah: Synthesizing a New Paradigm, Analyzing Modern Challenges." Since the Ottoman Empire's fall, the concept of the 'Muslim Ummah' [community] has lost its historical meaning as many scholars and academics from many disciplines have been debating its relevance and practical manifestations in today's world," a conference description said. The meeting aims to "propose a new paradigm within the context of the modern world.

Al-Arian's academic friends may not care about his work as the head of the Palestinian Islamic Jihad (PIJ)'s "active arm" in America, his service as a PIJ board member, or his efforts to keep Iranian money flowing to the terrorist group in the 1990s. This is a man who, in the wake of a horrific double suicide bombing that killed 21 people at a bus station, saw fit to write that the attack "is the best guide and witness to what the believing few can do in the face of Arab and Islamic collapse at the heels of the Zionist enemy..."

That bloodthirsty attitude makes sense, since the PIJ bylaws explicitly reject "any peaceful solution for the Palestinian Cause, and [affirms] the jihad solution and the martyrdom style as the only option for liberation." It seeks "a state of terror, instability and panic in the souls of the Zionists" and creating "a psychological barrier between the Jews and the Muslim Palestinian people and the creation of a conviction that the coexistence is impossible..."

While the Hamas charter has always been public, officials did not know PIJ had a similar document until federal investigators found it in Al-Arian's possession during 1995 searches of his home and offices.

None of these academics gathering in Istanbul are dumb. They know these facts about their "very close friend" and still treat him as a respected academic. Including Al-Arian in an academic conference isn't about advancing scholarship. It's about rehabilitating a terrorist's reputation.