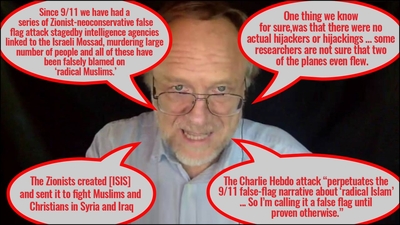 When he lived in America, Sami Al-Arian was something of a media darling. Despite documents and recordings placing him on the board of directors of a terrorist group – the Palestinian Islamic Jihad – Al-Arian managed to push a narrative that he was a peaceful, "rumpled academic," and the victim of baseless suspicion.

He still enjoys favorable media treatment, yet Al-Arian slid over to the lunatic fringe this week in order to complain about France's rape investigation into fellow Islamist academic Tariq Ramadan.

Barrett is a softer-spoken, liberal version of Alex Jones, seeing "false flag operations" behind any terrorist attack attributed to Islamists. In his view, virtually all the high-profile terrorist attacks by Muslims are really orchestrated by Zionists lurking in the shadows.

Al-Arian, a media-savvy computer scientist, likely would have searched the internet for background before agreeing to speak with Barrett. If he did, he'd find Mother Jones magazine placing Barrett among the "less reputable voices" pushing "bizarre conspiracy theories" about the Charlie Hebdo attack in Paris.

He'd find the Anti-Defamation League showing how Barrett "invokes anti-Semitic conspiracy theories about supposed Jewish manipulation of world events, claiming that the West does not comprehend Israel's duplicity because of 'the extent of clandestine Zionist power; and the fact that the Holocaust story has become the most sacred narrative of the West, despite the questionable factual basis of some of its most important details.'"

He'd even see the liberal Political Research Associates profile of Barrett last fall, which said he "has built a career repackaging antisemitism for the U.S. Hard Right and Left. Unfortunately, his particular brand of antisemitism—scapegoating Israel, Zionists, and Jews for the rise of Islamophobia—is welcome in some corners of the U.S. Left."

Just a month before the interview, Barrett went on Iran's state-controlled Press TV to claim the San Bernardino massacre, in which 14 people were killed and 21 wounded, was another in "a series of Zionist-neoconservative false flag attack staged by intelligence agencies linked to the Israeli Mossad, murdering large number of people and all of these have been falsely blamed on 'radical Muslims.'"

Even if he didn't bother to look, Al-Arian's first conversation made it clear what Barrett is all about. In both conversations, he listened uncritically to Bennett's extensive conspiracy theories.

If al-Qaida wasn't responsible for 9/11, Al-Arian asked in their 2016 conversation, how do you explain the planes?

There were no hijackers, Barrett said. It was a "remote controlled hijacking ... some researchers are not even sure that two of the planes even flew."

"A lot of my friends subscribe to this," Al-Arian added. "I haven't had a chance to actually look at into it and look at the evidence either way."

It was all done to benefit Zionists, Barrett explained. There are more Muslims in the United States than Jews, he falsely claimed. "And if they don't terrorize us into paralysis, their Palestine policy is going to change. The U.S. will no longer keep propping up Greater Israel and the Likudniks."

"Unfortunately," Al-Arian said, "they have succeeded."

Click on the play button to hear the entire exchange.

Two years later, Barrett's show seemed like a good place to talk about a Muslim's mistreatment by a Western government. Barrett's own description of the interview describes Al-Arian as the victim of "absurdly bogus charges by more or less the same people who had attacked the World Trade Center and the Pentagon."

Only Al-Arian knows why he, a man embraced by the academic community as a civil rights activist and still welcomed by Georgetown University faculty, would opt for a platform acknowledged on both the Left and the Right as blatantly anti-Semitic with a fairly limited reach to make a stand for Tariq Ramadan.

Al-Arian, who was deported to Turkey in 2015 pursuant to terms in his 2006 guilty plea connected to his Palestinian Islamic Jihad support, doesn't generally push conspiracy theories, but when it comes to Jews and Israel, he and Barrett share many ideas.

As the videos in each of the following links show, Al-Arian invoked a Quranic passage calling Jews "monkeys and pigs," screamed "death to Israel," during rallies. He sat passively as he was introduced as the head of "the active arm of the Islamic Jihad Movement in Palestine. He also celebrated a double-suicide bombing by the Palestinian Islamic Jihad by writing to a Kuwaiti legislator, soliciting "true support for the jihad effort in Palestine so that operations such as these can continue, so that people do not lose faith in Islam ..."

Ramadan stood by Al-Arian during his prosecution. Now Al-Arian seems to be returning the favor.

Ramadan, an Oxford University professor and the grandson of Muslim Brotherhood founder Hassan al-Banna, is accused of raping two women in France. One, Henda Ayari, claims Ramadan "choked me so hard that I thought I was going to die" while raping her in his hotel room in 2012. A second accuser, identified as "Christelle," told Vanity Fair's French edition that Ramadan beat and raped her in 2009 in a Lyon hotel.

French law allows him to be held in custody while an investigation determines whether he should stand trial.

It's a witch hunt, Barrett said, and Al-Arian agreed. Tariq Ramadan is an effective voice for Islam in Europe, so he had to be destroyed.

"He presents Islam as a rational way of life, even in a liberal world," Al-Arian said. "And he was able to stand his ground, as I said, in many debates when faced with assaults on the whole notion of religion. And many powerful political figures don't like what he has to offer, don't like his message. And they have been trying to assassinate him, character assassination, throughout his career, throughout his life. And what we see now is a very dirty game of trying to assassinate his character and try to basically kill him, figuratively speaking, by bringing these vile charges."

Al-Arian and Barrett made a passing reference to the Harvey Weinstein sexual harassment and assault scandal, and the growing #MeToo" movement it sparked. But Al-Arian attacked the alleged victims' credibility anyway in language that could have come from Weinstein's mouth.

Both victims are Muslim women. And, in the United States, a third Muslim woman reportedly has gone to the FBI with similar allegations. More victims could come forward, said attorney Rabia Chaudry.

"This is not a vast international conspiracy. This is also not how people are wrongfully convicted," she wrote in a Feb. 15 Facebook post. "Wrongfully convicted people are not accused of multiple similar crimes in different countries. In fact they usually have completely clean records other than one accusation that ends up being false."

Try telling that to Barrett and Al-Arian, who are likely to dismiss Chaudry as a tool of the Zionist conspiracy.

"It's a political case disguised as a criminal one against one of the most and foremost moderate voices of Islam in Europe," Al-Arian insisted. "And he's been targeted, you know, Dr. Ramadan has been targeted for many years by, as you say, Islamophobes, those who really hate what he stands for, because he does not fit the – this caricature of being an extremist, angry man against the West and all that."

He probably could have found more reputable outlets to make this argument. It says a lot that he chose Barrett's conspiracy carnival instead.