This article originally was published by the Algemeiner.

This is Part 1 of a two-part series excerpted from an Investigative Project on Terrorism book being published early next year on CAIR's long antisemitic track record. 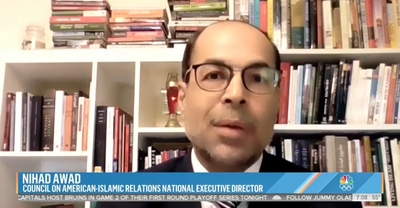 As war raged in Gaza last May, and Hamas terrorists fired rockets toward Israeli civilians, NBC's Andrea Mitchell reported about the Biden administration's position. Some Muslim advocacy groups, she noted, were boycotting a traditional White House event marking the end of Ramadan "to protest the White House's support for Israel."

After Mitchell's set up, viewers then saw Nihad Awad, executive director of the Council on American-Islamic Relations (CAIR), saying President Biden was "the only leader in the world that we believe that can stop this" fighting.

Awad was quoted in Politico two days earlier, calling on Biden "to stand on the side of the victims and not the victimizer."

But neither story mentioned Awad and his organization's deep connections to a Hamas support network in the United States, let alone his 1994 public pronouncement that he "used to support the PLO," but switched to "support of the Hamas movement."

This information has been in the public domain for years. It's the kind of detail an audience might want to know, but rarely receives.

In fact, Politico needed only to look at its own archives. A 2009 story, for example, reported on the FBI's decision to cut "formal contacts" with CAIR until it determined "whether there continues to be a connection between CAIR or its executives and Hamas."

And this ongoing failure by the media to fully inform readers and viewers about CAIR's history is a key reason why it is considered a legitimate Muslim advocacy organization. In addition, Awad and other CAIR officials have amassed a lengthy record of antisemitic rhetoric that draws no mention.

The Investigative Project on Terrorism (IPT) will spotlight CAIR's bigoted statements in a forthcoming book.

Awad is a soft-spoken man and careful not to use blatantly antisemitic language. But his consistent message in 27 years as CAIR's only executive director meets the definition of antisemitism accepted by the US State Department in 2016. Criticizing the Israeli government or its policies is not antisemitic. But insinuations that American Jews are more loyal to Israel than to the United States are. So are "demonizing, or stereotypical allegations about Jews, or the power of Jews as a collective" and "denying the Jewish people their right to self-determination."

Awad is guilty of all these things, and CAIR and its leaders cross these lines repeatedly. They falsely smear Israel as an apartheid state, call for a Palestinian state "from the river to the sea," thus wiping Israel off the map, and have called the Jewish state and its supporters "Zionazis." Other officials equate Israel to ISIS and the Taliban.

Last month, Awad made clear he does not believe Israel should exist, when he called its most populous city, Tel Aviv, "occupied" and prayed "it will be free later."

As the IPT book will show, such bigotry has been echoed by CAIR representatives throughout the country. But the message begins with Awad, one of CAIR's original founders.

"Look at their names," Awad said during a 1998 speech at Georgetown University, insinuating that Jews in the Clinton administration were "pushing the United States to go to war on behalf of a third party."

A decade later, Awad said that US policy toward Israel comes "at the expense of American interests." In 2014, as ISIS established a caliphate and Hamas terrorism instigated war in Gaza, Awad called Israel "the biggest threat to world peace and security."

To understand why CAIR, which touts itself as "a grassroots civil rights and advocacy group," spends so much of its time and resources opposing the world's only Jewish state, you have to understand why the organization was created.

"In 1987," prosecutors wrote in advance of the Hamas-financing trial of the Holy Land Foundation for Relief and Development, "the governing body of the International Muslim Brotherhood decided to focus its mission on the Palestinian issue, and directed that Palestine Committees be formed in countries throughout the world. In the United States, the Palestine Committee was comprised of active Muslim Brotherhood members of Palestinian origin."

The prosecutors' assertion was based on internal documents and recorded conversations.

The committee's telephone list, obtained by the FBI during the Holy Land investigation, showed that Awad and CAIR co-founder Omar Ahmad were members, with Ahmad listed under the pseudonym "Omar Yehya." A 2010 FBI affidavit described Ahmad as a Hamas leader.

Both men participated in a secret, weekend-long Palestine Committee meeting in 1993 to discuss how the group could "derail" the US-brokered Oslo Accords between Israel and the Palestine Liberation Organization — Hamas's rival for power.

The FBI knew about the gathering, and recorded the conversations. "Attendees questioned how they could continue their quest to defeat the peace process without being viewed as 'terrorists,'" prosecutors wrote.

"We should start right now, my brothers, [to] begin thinking about establishing alternative organizations which can benefit from a new atmosphere, ones whose Islamic hue is not very conspicuous," Holy Land Foundation Executive Director Shukri Abu-Baker told the meeting.

CAIR opened for business the following year. It immediately appeared on a meeting agenda listing Palestine Committee branches. That sequence of events explains why prosecutors wrote in 2007 that CAIR was "a participant in an ongoing and ultimately unlawful conspiracy to support a designated terrorist organization [Hamas], a conspiracy from which CAIR never withdrew."

The Hamas charter not only rejects any peaceful solution to the conflict, but also refers to "the warmongering Jews," and cites a hadith sanctioning killing Jews.

Hamas leaders have made clear they want to destroy Israel, along with every Jew in it.

After a mistrial in 2007, the Holy Land Foundation prosecution ended in sweeping convictions of the charity and five of its officials for illegally routing $12 million to Hamas.

Again, this documented history has been in the public domain for years. But it does not get mentioned in mainstream media outlets, let alone stop publications like USA Today and Washingtonian magazine from honoring Awad as one of the most influential Muslims in America.

For many CAIR officials, hatred of the Jewish state and those who support it sometimes becomes too severe to conceal. '

"Who are those who incurred the wrath of Allah? They are the Jews, they are the Jews," he said in a 2012 sermon. He also blamed "pro-Israeli occupation organizations and activists" for "Islamophobia, and anti-Muslim bigotry," which he said was "one of the greatest social ills facing American today."

Seven years later, Walid gave another sermon in which he pointed to the Koran to explain why Jews did not merit Allah's mercy. It was "because they saw the injustice, they saw the anti-social behavior, they saw the lewdness, and they just were complacent," Walid said. "They were cool with it. They didn't speak out against it. They allowed it to become part of the status quo."

During the 2014 fighting between Israel and Hamas, then-CAIR Florida chapter leader Hassan Shibly blasted "Israel & it's supporters" as the "enemies of God and humanity!"

CAIR officials also have pushed the false claim that exchange programs that take American police leaders to meet with their Israeli counterparts lead to increased police violence against Black people and other minorities.

In July, CAIR's national Deputy Director Edward Ahmed Mitchell called a news conference in which he said his organization was designating one of the police programs, the Georgia International Law Enforcement Exchange, "as an anti-Muslim hate group ... that is an official designation now."

He touted a 2019 CAIR report that linked the exchange program to "deadly police shootings that occurred in Georgia," and said working "with human rights violators make these problems worse."

In fact, those programs involve no tactical training, and critics have failed to produce any participant who validates their claims.

In an investigation last year, the Investigative Project on Terrorism found four police chiefs who said their experiences were the exact opposite of what Mitchell and others claim — they left Israel with more ideas how on to de-escalate tension and earn community trust.

One exchange veteran police chief is going so far as training officers to shoot-to-incapacitate suspects when possible, rather than aim for center mass.

None of this gave Mitchell pause. His comments came more than a year after the anti-Israel group Jewish Voice for Peace (JVP), which also opposes the exchanges, acknowledged that blaming Israel for "American police violence or racism ... furthers an antisemitic ideology."

Furthering an antisemitic ideology doesn't seem to bother many leaders inside CAIR. And it would be nice to see media outlets ask them why.