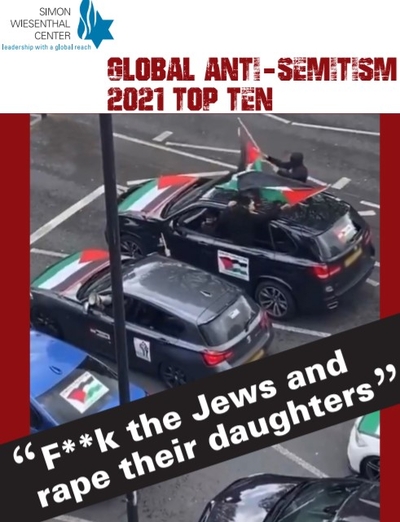 The Council on American-Islamic Relations (CAIR) is among 10 of the world's worst anti-Semitic organizations, the Simon Wiesenthal Center said Tuesday while unveiling a new report.

The list, which Wiesenthal Center founder and Dean Marvin Hier said "includes institutions that we never thought we would have to put on our top 10," also singles out a purportedly Jewish organization. Jewish Voice for Peace (JVP) opposes Israel's existence. And it took advantage of the recent Hanukah holiday to solicit donations to build "a radical, loving, anti-Zionist Jewish movement for liberation."

JVP members "unequivocally oppose Zionism" and have pushed conspiracy theories about police exchange programs in Israel that it now acknowledges are anti-Semitic.

"JVP is a group that believes it is immune from being labeled and treated as anti-Semites," said Wiesenthal Center Associate Dean Abraham Cooper. "They are wrong. Anyone seeking or enabling the destruction of Israel, home to the world's largest Jewish community — over 6 million Jews — is an anti-Semite, whatever their religion or creed."

Previous lists would have focused on the individuals who uttered anti-Semitic speech. But this year, the center targeted the "gatekeepers," Cooper said: the organizations which fail to take appropriate action when confronted by blatant anti-Semitism in its ranks.

"When we see trends where the gatekeepers fail their responsibilities," Cooper said, "we're escalating it to the next level."

It has yet to apologize for anti-Semitic comments San Francisco chapter director Zahra Billoo made during a conference last month. As the IPT reported, Billoo warned her audience that "polite Zionists," which she defined as everything from the Anti-Defamation League to campus Hillels and "Zionist synagogues," are "enemies" who "we need to pay attention to."

Instead, CAIR defended her and cast her as the victim of an "online smear campaign."

In fact, she has been making similarly outrageous statements for years.

She "is but one of venomous professional Israel and Jew-haters who use non-existent dots to create phony links between Israel and U.S. social crises," the Wiesenthal Center report said. "They always wrap their bigotry in the mantle of social justice. The goal is demonizing the Jewish state and silencing Israel's supporters on campus and Capitol Hill."

Still, CAIR "fully backed" Billoo, who "is a flat-out Jew hater," Cooper said. "Instead of putting her in her place and drawing a red line, CAIR has now decided as a quote-unquote 'civil rights group,' that ends when it comes to members of our Jewish community. That's a devastating development and we call upon CAIR to take the appropriate steps to correct this outrage. It's a very dangerous one. It injects Jew hatred directly into our communal life."

A failure by "gatekeepers" also led the center to include USC and the BBC on its list.

USC has taken no action against a student, Yasmeen Mashayekh, who made profane social media posts about her desire to kill Zionists and wrote "curse the Jews." Mashayekh serves on a student diversity and inclusion board.

A June post, saying anyone who opposes "the complete destruction of Israel" is "anti-Palestinian," remains online.

"This individual has no place at USC, certainly no place to be a leader," Cooper said. "And every day she's allowed to stay there, the message from the president of USC is, 'we have two separate sets of rules. And if you're a member of the Jewish community – faculty or student – don't come to us when you expect to be treated on a level playing field when it comes to anti-Semitism.'"

Hier spoke of the BBC's poor history of looking the other way on anti-Semitism and expressed concern that "the BBC going in the same direction as the old BBC."

BBC staffers have posted statements saying "Hitler was right," and the network tried to blame victims for triggering a recent anti-Semitic attack on a bus full of students by falsely reporting one of the passengers first made anti-Muslim slurs.

"At a time where anti-Semitic hate crimes in England are soaring," Cooper said, "... we need the powerhouse of BBC – and they are a powerhouse in terms of their TV, radio, digital, you name it – they should be in the middle of the fight to defeat hatred, not giving a total political spin and signaling to the anti-Semites, 'you don't have to worry about the BBC, because we're not going to call you out.' That's devastating for the Jewish community in the UK."

Iran topped the list. "There is no greater existential threat to the Jewish people than the growing nuclear threat from the anti-Semitic, Holocaust-denying, terrorist-sponsoring, human rights-abusing Iranian regime," the Wiesenthal Center report said.

Hamas, which has an anti-Semitic charter calling for Israel's annihilation, was second.