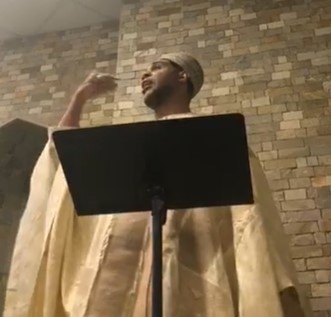 He's a public figure who repeatedly preaches about the evil done by Jews. They're accursed, he said last month, justifying the claim with scripture. They incurred God's justifiable wrath, he said in 2012, also citing scripture.

And today, he argues that the Jewish state is partly to blame when American police officers kill unarmed black people.

It might sound like Louis Farrakhan, but it's not. It's not even someone generally regarded as a fringe character. These blatantly anti-Semitic statements come from Dawud Walid, executive director of the Council on American-Islamic Relations (CAIR) Michigan office.

He's also an assistant imam at Detroit's Masjid Wali Muhammad. In a June 21 khutbah, or sermon, Walid rails against sexual immorality, particularly adultery, sodomy, and lesbianism, saying that "even us here in this society that is majority non-Muslim, if we want to protect the society, to help the society be healthy, then we have to be involved in promoting that which is just and wholesome and forbid that which is unjust and not wholesome."

That sounds like a call to prohibit homosexuality. Societies which "openly promote sin" lose Allah's favor, he said. "Allah will not change a condition of a people until they change what is inside of themselves."

"Beni Israel" – the children of Israel – "invoked a punishment upon themselves for giving this up," he said. He quoted Quran 5:78: "Cursed were those who disbelieved among the Children of Israel by the tongue of David and of Jesus, the son of Mary."

"So they were specifically cursed, meaning Allah's mercy was withheld from them because they saw the injustice, they saw the anti-social behavior, they saw the lewdness, and they just were complacent," Walid said. "They were cool with it. They didn't speak out against it. They allowed it to become part of the status quo."

Muslims risk the same fate if they fail to struggle against immorality. "It's a hard pill for us to swallow, but brothers and sisters in Islam, the leadership that's in the Muslim world, in most of the Muslim countries, the bad leadership, ain't nothing but a reflection of the spiritual states of the people," he said.

Betrayal of Palestinians is an example of this bad leadership, Walid claimed, seeming to describe Israelis and their supporters as "enemies."

"May Allah help our brothers and sisters in Palestine. Their oppression and occupation is in part an act of betrayal of Muslims against the Palestinian people," he said. "When some Uncle Toms and some sellouts collaborated with colonialists against the khilafa [caliphate] and disobeyed the commandment of Allah and fought with the enemies of the khilafa so they could get some petty courtesy, some petty care for some families. And Muslims are suffering for it today, that grand act of betrayal."

Anti-Semitism is nothing new for Walid. He has gained notoriety for insisting that Hamas, which is dedicated to destroying the Jewish state, must be included in Middle East peace process talks. "Now how in the world can there be a realistic discussion about peace talks when the entity which represents the elected government of the Palestinian people during a fair election that was monitored by international inspectors, including former president Jimmy Carter is not at the peace table?" he asked during a 2010 rally in Dearborn, Mich.

He has even used the Quran to preach against Jews before. "Who are those who incurred the wrath of Allah?" Walid asked in a May 25, 2012 sermon at the Islamic Organization of North America mosque in Warren, Mich. Then he answered himself in Arabic: "They are the Jews, they are the Jews."

He claimed in 2012 that when the Quran describes a slaughter of Jews at the hands of Muhammad's army, it isn't an indication of anti-Semitism. "Did Muhammad order the killing of Jews?" Walid asked in a Twitter post promoting the video. In response, an Islamist follower wrote, "Yes he did and I agree with it...Well isn't treason a sentence to death."

More recently, Walid has been among a group of Islamist activists pushing a blood libel – blaming Jews for police shootings in the United States that kill unarmed black people. According to the anti-Semitic conspiracy theory, a weeklong police leadership seminar in Israel sponsored by the Anti-Defamation League that focuses on preventing and responding to terrorist attacks is actually teaching American cops how to gun down innocent black people.

"The same militarized police forces that shoot unarmed black people and do this crowd control like what happened in Ferguson – where do the police chiefs, these people, get trained at? In Israel," Walid said at the 2016 American Muslims for Palestine (AMP) conference. "We, brothers and sisters in Islam, be we black ... or lighter skinned ... we have a common concern, we have a common struggle."

Walid has a struggle, all right. It's with anti-Semitism that he has demonstrated repeatedly over the years.

Believing that the children of Israel are accursed poses a massive obstacle to any mutually satisfactory resolution of the Israeli-Palestinian conflict: to negotiate with people who are accursed of Allah would be to acquiesce to their evil acts. Walid's sermon, therefore, only served to harden attitudes and provide a justification for Muslims to harbor hatred and contempt for Jews.