Dawud Walid, the Quran and Jews 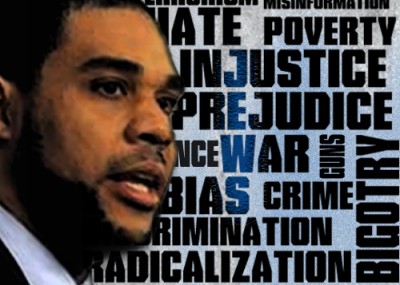 Note: This story has been updated to clarify a misleading quote made by Walid.

The Council of American Islamic Relations [CAIR] may tout itself as an "organization that challenges stereotypes of Islam and Muslims," and as group that was formed "to challenge anti-Muslim discrimination nationwide." But in fighting the good fight against hate, at least one of its regional leaders demonizes Jews as the source of Muslims' problems.

"Who are those who incurred the wrath of Allah?" CAIR-Michigan Executive Director Dawud Walid asked in a May 25 sermon at the Islamic Organization of North America mosque in Warren, Mich. "They are the Jews, they are the Jews," he answered himself in Arabic.

Aside from being one of CAIR's most visible spokesmen, Walid appears frequently in the media and has traveled abroad at least twice on trips paid by the State Department. During a 2010 trip to Mali, for example, he criticized treatment of Muslim Americans after 9/11, saying they "have been subjected to increased discrimination from racial and religious profiling by law enforcement." And he cast the 2009 shooting death of a Detroit imam as unjust, even though the imam refused orders to lay down his weapon and surrender, and then opened fire first after a police dog was sent in to subdue him.

If it isn't the Jews incurring Allah's wrath by disobeying him, the hands of the pro-Israel lobby are undermining American Muslims and Palestinians alike, Walid claimed in his sermon.

In fact, what Pipes said is that American Jews - not Israel - may be threatened by the "increased stature, and affluence, and enfranchisement of American Muslims, because they are so much led by an Islamist leadership." [Emphasis added]

The "pro-Israeli occupation lobby that is connected to the Islamophobia network" is the reason why America experiences "more problems, more Islamophobia, more hate crimes, more desecration of mosques, more anti-Muslim activity" than other countries in North and South America, Walid said.

This Zionist lobby is also the biggest obstacle to Muslims "liberating" Palestine, Jerusalem, and the al-Aqsa Mosque, the heat of the Israel-Palestinian conflict, he said.

Walid isn't alone blaming Jews for Palestinian problems or Islamophobia. Conspiracies about a Jewish or Zionist lobby controlling American foreign policy, especially towards a future Palestinian state, are frequently repeated throughout Arabic and Islamist media. Their champions include Hamas, Iranian news outlets, and the Muslim Brotherhood.

For example, Hamas Prime Minister Ismail Haniyeh blasted the United States as an "enemy of Islam" in 2006 in part because it is "influenced by the Zionist lobby."

Those same groups also argue that Jews are the main culprits behind America's supposed trend toward anti-Muslim hate, and link the ideas together.

"So this is why you see the Islamophobia network trying to gin up negative information about Muslims and Islam. This is a direct connection to the occupation of Palestine. It is a direct connection. And [it is] because the strongest Israeli lobby in the world is in America, because America is the sole patron of Israel," Walid said.

He goes on to pray for the brothers in Syria, Yemen, Palestine, and Mali, all places with active Islamist insurgencies, as well as "the Mujahideen in your way everywhere."

As mentioned, the rhetoric is just the latest example of extremism from one of CAIR's highest profile directors. Yet, in addition to government-financed trips abroad, Walid routinely meets with key government decision makers. In October, he met with Detroit U.S. Attorney Barbara McQuade seeking her help monitoring a local zoning issue.

In January 2011, he joined imams from 20 local mosques in a meeting with FBI officials to discuss their concerns over FBI surveillance and training tactics. In 2009, he was among four dozen local faith leaders to meet with Department of Homeland Security Assistant Secretary of Intergovernmental Programs Juliette Kayyem.

The May 25 sermons isn't the first time this year that Walid's sermons targeted Jews.

When the Quran describes a slaughter of Jews at the hands of Muhammad's army, it isn't an indication of anti-Semitism, he said in a Detroit speech in January.

The Jews had it coming. 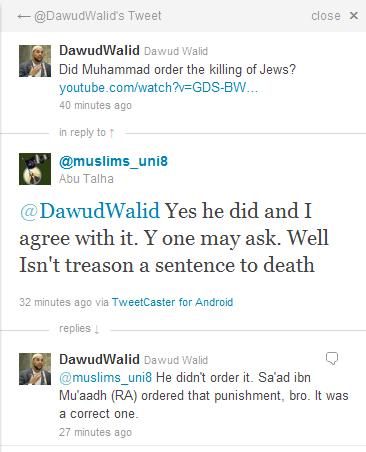 "Did Muhammad order the killing of Jews?" Walid asked in a Twitter post promoting the video. In response, an Islamist follower wrote, "Yes he did and I agree with it…Well isn't treason a sentence to death."

Rather than oppose a hateful perspective, Walid merely corrected the follower and reinforced the anti-Jewish sentiment. Muhammad "didn't order it. Sa'ad ibn Mu'aadh [one of his followers] ordered that punishment. It was a correct one."

The reference is to the Battle of the Trench in 627 AD involving Muhammad's army. "Zionists" use the event to attack the prophet, Walid stated in his speech, by arguing that the Quran and the prophet preached a hatred of Jews.

Jews there entered into an agreement to join with the prophet. But the men "committed treason, [by sitting] with the polytheists against the believers." For this, all the men of the tribe were beheaded and the women and children were sold into slavery.

"Is this just something that is in Islam for treason? Even for the nations that came before, even in Torat [the Torah] according to what the Jews had at that time, committing treason during a time of war is punishable by death. Because their own book says an eye for an eye, and a tooth for a tooth, a life for a life, and a breach for a breach," he added.

His endorsement of a mass murder of Jews, with the women and children sold into slavery, and his suggestions that Muslims "shouldn't be shy" about defending it, reinforce significant concerns about his attitude toward the Jewish community.

"Here is a ranking official in an American organization that compares itself to the NAACP, an organization respected by the mainstream media, political leaders and law enforcement, and its staffer is justifying the Islamic tradition of a cold-blooded massacre of Jews," Pipes said. "All ancient religions have legacies that are at times problematic, that make people today feel ill at ease; the usual response is, 'that was then, this is now.' But Walid's not doing this. He's explaining away the report of an ancient atrocity."

There is no parallel example of other faiths justifying a massacre in their own histories. "This," Pipes said, "is far outside the mainstream American political life."

In his speech about the Battle of the Trench, Walid also stated that Muhammad was not anti-Jewish. Instead he "gave Jewish people their rights." He claimed that the evidence of Jews invoking God's wrath is mentioned both in the Torah and in the Christian Bible, providing "proof against them and what they have done. So we shouldn't be shy about that at all, and we shouldn't be shy about defending our Prophet Muhammad."

Nor should Muslims feel uncomfortable with these stories, but should be proud of them because they have Quranic and 'true' historical origins. He quoted that Quranic verses in Arabic, saying "Other than those upon whom is wrath. They are the Jews. And those who go astray are the Christians."

Walid's record shows that his sense of justice has often been erratic and extreme. He championed the cause of a Detroit imam who died in a hail of bullets in 2009 after opening fire first on FBI agents who came to arrest him on a criminal complaint. He ignored the imam's history of advising followers never to surrender peacefully and the series of investigations found the agents acted appropriately. He also compared the use of informants in counter-terrorism sting operations to Jim Crow segregation laws and claimed the FBI has recruited more extremists than al-Qaida.

Walid's account fits into a mentality that everything Islamic is good and "there's never any reason to apologize for anything," Pipes said. And that ignores Islamic imperialism, in which the faith is expanded primarily through the sword. That is exemplified by Muslim attacks on churches in Nigeria, Iran's obsession with obtaining a nuclear weapon and the 9/11 attacks.

"To Islamists these attacks are not imperialism," Pipes said, "They bring a higher civilization to the infidels and we should be thankful for this. Such attitudes are not acceptable by today's standards; making changes to this supremacist mentality is part of the work that Muslims need to do to modernize their religion."

Hold on, before you pull out your cyber sword ....

This is what's wrong with the media today. People will read this article & think, oh this guy is an anti-semitic maniac.

And people will believe he is, and ignore all the great things he's done for America and its citizens simply because of this article. And to that I say, don't believe the hype. The media has its own agenda portraying certain people, and associating them with things they have nothing to do with. People become brainless & forget how to research and think for themselves.

Before you go on assuming this dude is racist, do your own research. Find out for yourselves. Meet him. Learn about about his work. Don't become another vegetable-brained American. Figure out the truth for yourselves.

CAIR can be summed up as follows: ChAos= CA; IRrationality= IR, hence CAIR.

"Walid" us not.. but deliver us from Evil

If anyone actually tries to dialogue and speak with this guy, its my way or the highway

This is in response to one of my tweets to him today..

Probably one of the reasons you hate the Jews so much is that despite what you have done to them and others through the centuries, they have prevailed and prospered. Why don't you box up your 7th century baggage of hatred and intolerance and send it home. Everyone should watch Muslim beheading videos and the gunning down of unarmed protesters in your streets, because this is all you have to offer the world no matter where you go.

So were the Jews the ones who bombed the WTC twice?

And then were the Jews the ones wearing the underwear bombs?

Even though there may be some jewish folks out there who are islamophobes I certainly don't need any one (Jewish os otherwise) to tell me who is a threat to the security of this nation.

Intelligent people can figure this out for themselves. It's the people who can't think for themselves that need a race baiter like this guy to tell them who to hate.