Will Rashida Tlaib Get Away with Her Antisemitic Comments? 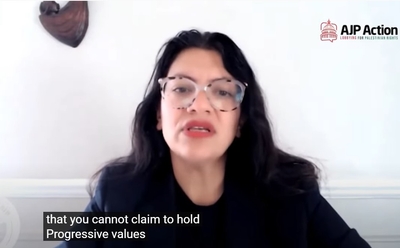 She is not, according to fellow Democratic U.S. Rep. Rashida Tlaib, a true progressive. That's because Meng supports Israel.

Meng was among a number of House Democrats to condemn Tlaib's comments.

"Jews are the most targeted religious community in the United States," she wrote Sept. 21. "Divisive language is never acceptable, especially at a time when anti-Semitism is on the rise. People can absolutely hold progressive values and support Israel's right to exist."

"The outrageous progressive litmus test on Israel by @RashidaTlaib is nothing short of antisemitic," wrote Florida U.S. Rep. Debbie Wasserman Schultz. "Proud progressives do support Israel's right to exist as a Jewish and democratic state. Suggesting otherwise is shameful and dangerous. Divisive rhetoric does not lead to peace."

The pushback from Tlaib's House Democratic colleagues is welcome. Let's hope that they show more resolve than they did in 2019, when Tlaib's colleague, U.S. Rep. Ilhan Omar, posted her infamous "All about the Benjamins" tweet. In Omar's mind, American support for Israel is solely transactional and could not be something in the country's best interest.

"Legitimate criticism of Israel's policies is protected by the values of free speech and democratic debate that the United States and Israel share," said the Feb. 11, 2019 statement from House Speaker Nancy Pelosi and her leadership team. "But Congresswoman Omar's use of anti-Semitic tropes and prejudicial accusations about Israel's supporters is deeply offensive. We condemn these remarks and we call upon Congresswoman Omar to immediately apologize for these hurtful comments."

But by the time a resolution condemning Omar's statement made it to House floor on March 7, 2019, it had been watered down into a general condemnation of bigotry. It did not mention Omar or what she said. The changes followed pressure from Islamist groups, including the Council on American-Islamic Relations (CAIR) and its top leaders. While she claimed at the time that she had learned from the incident, Omar again drew criticism from fellow Democrats in 2021 after she included the United States and Israel alongside Hamas and the Taliban as war crimes perpetrators.

"We have seen unthinkable atrocities committed by the U.S., Hamas, Israel, Afghanistan, and the Taliban," she wrote in a post that remains on her Twitter feed today.

That defiance comes after a dozen Jewish House Democrats issued a statement saying "...[F]alse equivalencies give cover to terrorist groups."

"Ignoring the differences between democracies governed by the rule of law and contemptible organizations that engage in terrorism at best discredits one's intended argument and at worst reflects deep-seated prejudice," they said.

In this case, it's unlikely Tlaib will face further consequences. Midterm elections are in seven weeks and intraparty name calling is low on the list of successful campaign strategies.

In addition, many of the same voices who successfully pushed back on the resolution criticizing Omar have been quick to jump to Tlaib's defense.

In addition, CAIR put out a release accusing Democrats of waging "Dishonest, Islamophobic Attacks" on Tlaib. It defended "her commonsense observation that supporting apartheid overseas is incompatible with democratic values here at home."

It's worth remembering that Arab-Israeli political parties were part of the last Israeli coalition government and play prominent roles in the military, the courts and in medicine. None of these realities existed in apartheid South Africa.

To CAIR, however, Tlaib is an ally who has spoken repeatedly at the organizations events and fundraisers. Her comments and resulting criticism offered another chance to turn the debate on its head. Tlaib can say whatever false, hateful thing about Israel she wants, the logic goes. Any resulting criticism is "Islamophobic."

"This is not the first-time members of the Democratic Party in the House of Representatives have leaped to the worst possible interpretation of what one of their Muslim colleagues said," CAIR said in a Sept. 22 statement. "This is simply Islamophobic ... Democrats in Congress [need] to address the issue of Islamophobia within their own ranks."

But Tlaib's "progressive" blast shouldn't be seen in a vacuum. She has advocated a "one-state solution" to the Israel-Palestinian conflict, which would eliminate Israel as a Jewish homeland. Her problem is not with Israeli policy, but with Israel's continued existence.

But CAIR went straight to the victimization playbook.

That's what it did when its San Francisco chapter director, Zahra Billoo, made antisemitic statements warning Muslims that pro-Israel Jews were "enemies" and part of "a well-funded conspiracy" to hurt Muslims.

After falsely claiming that she was misquoted, CAIR said criticism of her comments was an Islamophobic "online smear campaign" that was part of "a cynical attempt to silence American Muslims who speak up for Palestinian human rights."

Let's be clear. Nobody was talking about Billoo's faith after she said Muslims need "to pay attention" to virtually every Jewish organization in the country, from campus HIllels, to synagogues, to the Anti-Defamation League (ADL). While they may be "polite Zionists," she said "... They are not your friends. They will not be there for you when you need them" to oppose Israel.

Today, nobody is talking about Rashida Tlaib's faith, either. Rather, it is the clear litmus test she puts on who can call themselves a progressive. It's an attack on people who stand by her on a host of other issues.

Both women are staunch Palestinian advocates. But their shared desire to see Israel eliminated, and to shun the overwhelming majority of Jews who believe in Israel's existence, takes things beyond a political argument and into antisemitism.

To borrow from a phrase, "legitimate criticism" of an elected official's public statements is not Islamophobia.