Correction: The NAACP was not listed among march sponsors when this was published. It since has returned.

First it was actors Alyssa Milano and Debra Messing.

But in recent weeks, a slew of prominent liberal groups has – mostly quietly – withdrawn their support for the national Women's March. The third march is scheduled for Saturday. 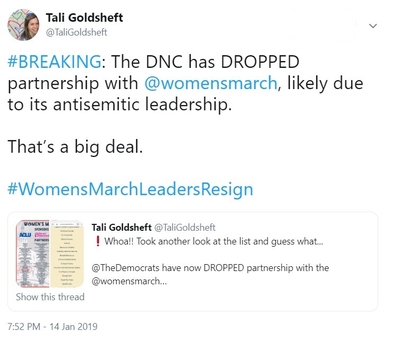 It apparently will take place without support from the Democratic National Committee (DNC), the Southern Poverty Law Center (SPLC), Emily's List and the National Organization for Women (NOW).

March leaders have struggled to put accusations of anti-Semitism behind them since February, when Nation of Islam leader Louis Farrakhan gave a speech calling Jews "powerful" and "Satanic" and saying they "are my enemy." March co-president Tamika Mallory, who has called Farrakhan the "greatest of all time," was present for the speech.

She has refused to condemn Farrakhan's anti-Semitism and homophobia, most recently during an appearance Monday on "The View." The most Mallory would say is she does not use the kind of rhetoric Farrakhan espouses, but "I called him the greatest of all time because of what he's done in black communities."

Activist Tali Goldsheft has been comparing this year's list of "partners" on the Women's March website to previous years, finding a decrease from more than 500 organizations to about 200 today. She noticed the DNC's name missing from the list Tuesday morning. The ACLU and Planned Parenthood are the most prominent sponsors still listed.

In addition to the Farrakhan connection, a Tablet investigation published Dec. 10 cited former March officials recounting anti-Semitic diatribes from Mallory and board member Carmen Perez arguing that "Jewish people bore a special collective responsibility as exploiters of black and brown people," including the slave trade. March co-President Bob Bland denied the accusation on "The View."

But former March spokeswoman Mercy Morganfield told the Tablet that the March was plagued with ideological and fiscal problems: "I told them over and over again: It's fine to be religious, but there is no place for religion in its radical forms inside of a national women's movement with so many types of women. It spoke to their inexperience and inability to hold this at a national stage. That is judgment, and you can't teach judgment."

The March's other board member, meanwhile, is Islamist activist Linda Sarsour. A strident foe of Israel, Sarsour embraces conservative and extreme Islamist clerics and in 2017 said she said she was "honored" to share a stage with Rasmieh Odeh, a terrorist whose 1969 Jerusalem grocery store bombing left two college students dead.

In September, Sarsour claimed a police training program in Israel organized by the Anti-Defamation League directly leads to police "killing unarmed black people across the country." Sarsour spoke at Farrakhan's 20th anniversary Million Man March in 2015, saying that black liberation and Palestinian liberation are "bound up."

A petition Goldsheft launched calling on the March leaders to step down has attracted more than 8,500 signatures.