Sisters in Hate: Sarsour and Billoo Team Up in Fundraiser 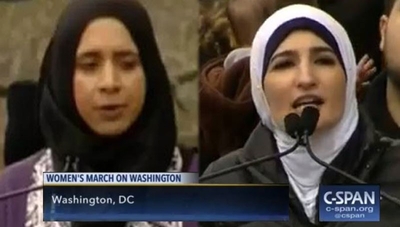 Two of the American Muslim community's most notable anti-Semites recently teamed up for an online fundraiser benefiting the Council on American Islamic Relations (CAIR) San Francisco chapter and a group called MPower Change.

Despite claiming to be advocates for the Palestinian cause, Sarsour and Billoo stake out extreme positions on Israel, those who support it, and even their own allies who engage in dialogue with pro-Zionist people.

The CAIR chapter is run by Zahra Billoo, who has defended Hamas rocket attacks against Israel and whose chapter's website posted a graphic telling Muslims to build a "wall of resistance" to the FBI.

MPower Change co-founder Linda Sarsour famously tweeted "nothing is creepier than Zionism," the idea of a homeland for Jews.

They are listed as co-sponsors of last month's "#StandWithMuslims to Declare #NoMuslimBanEver" fundraiser that launched the day the U.S. Supreme Court upheld President Trump's travel ban.

MPower Change – launched by Sarsour in 2015 – is an online effort to organize the Muslim community modeled on MoveOn.org.

Odeh was a principal plotter in a 1969 Jerusalem grocery store bombing that killed two college students, yet Sarsour gushed that she felt "honored and privileged" to be with her onstage.

Billoo also is comfortable dismissing terrorist attacks if the target is Israel. "Blaming Hamas for firing rockets at [Apartheid] Israel is like blaming a woman for punching her rapist. #FreePalestine v @KathlynGadd," she tweeted in 2014.

"...[W]hen we're talking about Palestinian activists and those who who (sic) support them, call Israel an apartheid state, compare IDF forces to ISIS members, name the reality that 'the only democracy in the Middle East' continues to steal land and kill babies," Billoo wrote last month.

Back in June 2015, Billoo wrote that she worried more "about police, the FBI, and the [Apartheid] Israeli Defense Forces recruiting youth to engage in violence & impunity than ISIS."

When someone dares call Billoo out on her hate speech, she doubles down.

"We urge you to take the time to research Billoo on social media," Rabbis Melanie Aron and Dana Magat wrote July 9 in the San Francisco Chronicle. "You will find admirable expressions of support for human rights of Muslim Americans, Palestinians and immigrants. And then you will find vitriol against Israel — not opposition to policies or officials, but extreme accusations of racism and terrorism. It is an absolutist landscape in which there is no possibility of moving toward a peace beneficial to both peoples."

That same day, Billoo fired off a series of tweets blasting Israel. The last one seemed to prove the rabbis' point: "JUST IN CASE THE ZIONISTS DIDN'T HEAR ME: Israel is an apartheid, racist state, which engages in terrorism against Palestinians." 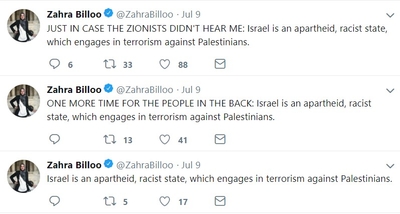 Sarsour also defends Hamas from critics. "More What defenders of massacre don't tell u re: Hamas is they dropped call 4 destruction of Israel from manifesto http://www.theguardian.com/world/2006/jan/12/israel ... #2006," Sarsour said in an August 2014 tweet toward the end of that year's Gaza war.

While the document's language changed, Hamas's ultimate objective has not, Hamas Politburo member Mahmoud al-Zahhar said in May 2017.

"If we liberate Palestine though the resistance until the 1967 borders, we will go directly to liberate the rest of Palestine and the territories of 1948, and there will be no negotiations," al-Zahhar said.

"Gone is the time in which Hamas discussed recognition of Israel. The discussion now is about when we will wipe out Israel," Hamas leader Yahya Sinwar said last October.

Sarsour and Billoo Back BDS

Both Sarsour and Billoo support the Boycott, Divestment, Sanctions (BDS) movement that only targets Israel.

Critics consider BDS inherently anti-Semitic because so many of its advocates have called for Israel's destruction and because it targets all things Israeli and pro-Israel regardless of their views on Israeli policy. Its advocates single out the world's only Jewish state while ignoring human rights abuses of far greater magnitude in other countries, especially in Muslim-majority states.

BDS aims to pressure nations, corporations and civil society institutions to boycott Israeli goods and services. It began with a 2005 declaration of dozens of Palestinian groups including the Council of National and Islamic Forces in Palestine.

That group developed during the Second Intifada, and it includes representatives from Hamas, Fatah, the PFLP, the Democratic Front for the Liberation of Palestine (DFLP) and Palestinian Islamic Jihad. All of these groups are mentioned in the February 2001 document announcing the new group's creation.

Sarsour has done more than write about her support for BDS efforts. She spoke at several events either sponsored or co-sponsored by the U.S. Campaign for Palestinian Rights (USCPR), which tax records indicate as the Palestinian BDS National Committee's U.S. financial agent.

Sarsour's MPower Change launched a petition against an anti-BDS bill in Congress.

"I'm also a very staunch supporter of the Boycott, Divestment, Sanctions movement," Sarsour said during a panel discussion on anti-Semitism last November at the New School in New York. "Now, you can tell me if I'm crazy, what other way am I supposed to be as a Palestinian American? What other positions do people expect me to have as a Palestinian American who's a daughter of immigrants who lived under military occupation and still has family in Palestine who live under military occupation? I should be expected to have the views that I hold."

Sarsour and Billoo Condemn Muslims Who Talk with Pro-Israel Groups

MPower Change denounced Muslim activist Wajahat Ali on Facebook last month for meeting with pro-Israel activists. CNN lists Ali as among the 25 most influential Muslims in America, and he served as a State Department consultant.

Sarsour's organization linked to an article critical of Ali, promoting it with the quote, "He is free to undermine the BDS movement and to speak about this issue in ways that undermine the Palestinian struggle - and community groups and organisations are also free to distance themselves from him, to refuse to feature him, and to even call him out for it."

Similarly, in May, Billoo attacked Muslims who engage in interfaith relations with the Anti-Defamation League (ADL). The ADL opposes BDS, she wrote, and supported the prosecution of the Holy Land Foundation (HLF), a group whose leaders were convicted in 2008 of funding Hamas.

"This is the new ADL CEO, who offered to register as a Muslim if there were ever a Muslim registry, partying with the Trump administration as they open the new apartheid Israeli embassy in Jerusalem. Not far from there, Palestinians are being murdered in cold blood," Billoo wrote.

"In a world of finite resources, I do not need or want the ADL as an interfaith partner. And if there is ever a Muslim registry, Jonathan Greenblatt isn't welcome on my list or in my camps."

Sarsour and Billoo also support American anti-Semites including Nation of Islam leader Louis Farrakhan. They took no step to distance themselves or criticize Farrakhan's repeated sermons about "the Satanic Jew," and his anti-Semitic conspiracy theories that "there were many Israelis and Zionist Jews in key roles in the 9/11 attacks.

In 2009, Billoo thought her Twitter followers should know that she was at the gym, "watching a Farrakhan church speech." 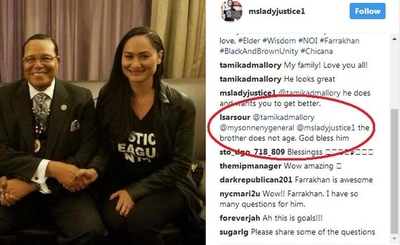 Sarsour has deleted a 2015 Instagram post in which she gushed that Farrakhan "does not age, God bless him." Sarsour also has called the Nation of Islam an "integral" part of the history of Islam in America and spoke at the Nation of Islam sponsored Million Man March 20th Anniversary in 2015.

Whatever other causes Sarsour and Billoo may advocate, and whatever positive message they may try to offer, it is clear they are not mere critics of Israeli policy. They loathe Zionism, Zionists, and wish to see Israel eliminated. That's something to remember.