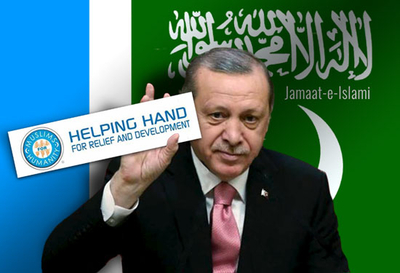 Turkey's strong backing of the Muslim Brotherhood (MB) has been extensively catalogued, but not much has been written about the country's support for the Jamaat-e-Islami (JI), the Brotherhood's ideological cousin in South Asia that also has an active presence in North America.

JI's role in advancing the Islamist agenda of Turkey's ruling Justice and Development Party (AKP) was highlighted by a senior aide to President Recep Tayyip Erdogan in a video interview last year. JI and the MB are "soft power proxies" that helped bolster Turkey's role as leader of a global caliphate "defending oppressed and victimized Muslims," Yasin Atkay told the pro-government Hilal TV.

Islamist ideologue Maulana Syed Abdul Ala Maududi created the JI in 1941, when Lahore, Pakistan was part of British India. In addition to advancing a rigid interpretation of Islam, the Islamist movement has provided an ideological platform and recruiting base for terrorist groups in South Asia.

Turkey advocates actively on behalf of the JI. Erdogan, for example, denounced the 2016 hanging of JI Bangladesh leader Motiur Rahman Nizami as "neither fair governance nor a democratic mentality." He also described the Islamist leader as a "mujahid [holy warrior]."

JI's leadership also openly applauds Turkey's Islamist leader and regime. After Erdogan was reelected president in June, for instance, JI Pakistan chief Siraj ul Haq called him "a great leader of the Muslim world." Another JI leader described Turkey as "the hope of the Ummah [world community of Muslims]."

Turkey under the Islamist AKP has become a key sponsor of JI-affiliated organizations in Bangladesh and Pakistan as well as the Islamist movement's proxy groups in North America.

The Union of NGOs of the Islamic World (UNIW) is a key agency used by the Turkish government to sponsor and coordinate JI activities, an Investigative Project on Terrorism (IPT) investigation finds.

The Istanbul-based organization was established in 2005 with the AKP's blessing and boasts 340 NGOs from 65 countries, including in the United States. Through a global network of Islamist organizations, UNIW seeks to revive the global Muslim ummah and stand up to the U.S.-led world order. Its stated mission is "to create an ummah consciousness" among its members and seek unity among Muslim nations "against to [sic] the western world which want to weaken the Islamic World by their dirty tricks and try to separate it from each other although they are unions among themselves."

Helping Hand for Relief and Development (HHRD) and Kashmir American Council (KAC) are U.S.-based UNIW members and work closely with the umbrella group.

Like UNIW, Helping Hand was founded in 2005. It is the charitable arm of the Islamic Circle of North America (ICNA), a JI front group headquartered in Jamaica, N.Y. Helping Hand regional partners have been found to have ties to U.S.-designated terrorist entities, including Falah-i-Insaniyat Foundation (FIF), Hizbul Mujahideen (HM) and its leader Syed Salahuddin.

Under Salahuddin's leadership, HM launched several terrorist attacks, including an April 2014 explosives attack in the Indian state of Jammu and Kashmir that injured 17 people. FIF is closely tied to the Pakistan-based terrorist group Lashkar-e-Tayyiba (LeT) that was responsible for the 2008 Mumbai terror attacks.

ICNA is the most prominent of JI's proxy groups in North America. ICNA listed "[t]he successful introduction of the concept of Iqamat as-deen [Establishment of the Religion] in North America" in an August 1999 article in its flagship publication, Message International, and succeeded in "planting the seeds of the Islamic movement in this continent."

The issue features an interview by former JI leader Qazi Hussein Ahmed in which he emphasizes the role of Islamic movements in creating "an Islamic society, an Islamic government and an Islamic state."

A Bangladeshi war crimes tribunal convicted ICNA's former vice president and New York chapter leader Ashrafuzzman Khan in 2013. Khan was tried in absentia and sentenced to death. The tribunal found Khan was the "chief executor" of a death squad known as Al-Badr, which was a militant offshoot of JI.

The Kashmiri American Council, meanwhile, was funded and directed by the Pakistani government. KAC's executive director Syed Ghulam Nabi Fai served 16 months in prison after pleading guilty in December 2011 for conspiring to act as an agent of the Pakistani government without registering under the Foreign Agents Registration Act (FARA).

Fai received $3.5 million from Pakistan's intelligence service, the ISI, to influence American policy toward Kashmir. He used KAC as a front for his illegal lobbying activities. Documents seized from Fai's home show he worked with the ISI "for years before the KAC was even founded."

Fai has a long association with the JI. He was introduced to the Islamist movement through a local Jamaat leader while attending college, ProPublica reported in 2011.

Later while studying in Saudi Arabia, Fai met with the imam of Ka'aba that houses the most sacred site in Islam, He invited the imam to attend a JI-sponsored conference in Kashmir.

"It really revolutionized the whole thinking of the people of Kashmir: We are not alone," Fai said in the ProPublica report.

Fai and the imam of Ka'aba were instrumental in the spread of Wahhabi Islam in Kashmir, Pakistan journalist Arif Jamal told ProPublica. Jamal investigated Fai's role for a book on Kashmir's "shadow war." Wahhabi Islam, which is an austere form of Islam that insists on a literal interpretation of the Quran, soon replaced Kashmir's famed Kashmiriyat—the state's centuries-old tradition of indigenous secularism.

Fai, who now advocates for the Kashmir issue through the World Kashmir Awareness Forum, also serves as a UNIW board member. He has spoken at UNIW conferences, most recently at the December 2017 international NGO fair in Istanbul. At the event, Fai was seen talking with UNIW's Ali Kurt and Al Khidmat Foundation President Abdus Shakoor. Al Khidmat is JI Pakistan's charitable wing.

Shakoor, who serves on UNIW's board, was previously ICNA's secretary general.

Turkish government-run organizations and media agencies participate in conventions ICNA co-hosts with the Muslim American Society (MAS). MAS was established in 1993 as the Brotherhood's arm in the United States. The UNIW website, in fact, claims to have organized the 2018 ICNA-MAS convention last spring in Baltimore.

The conventions also serve as a platform to advance Turkey's Islamist agenda. Erdogan's daughter, the vice chair of the Women and Democracy Association (KADEM) Sumeye Erdogan Bayraktar, spoke at the 2016 convention. Bayraktar's speech, "Overcoming the problems the ummah face: Turkish model," described the Islamist AKP as a "liberation movement that took its power from the people and the values they upheld." She accused Turkey's "minority establishment elite" for modernizing "a mostly religious society through top-down policies." And she claimed the "Turkish establishment elite had a very hollow understanding of secularism which summed up to a system of discrimination pressure and exclusion of all that had to do with religion while celebrating, promoting and imitating all that was Western."

The AKP that has ruled Turkey under Erdogan's leadership since 2002 has been responsible for widespread suppression of civil society and press freedoms especially since the 2016 coup attempt to overthrow the government.

The JI and similar Islamist organizations are "violent theocratic groups that have committed violent acts against minority Christians, Hindus, Buddhists, and Ahmadi Muslims," U.S. Rep. Jim Banks, R-Ind., said last month during a Hudson Institute panel discussion on JI's dangerous Islamist agenda in Bangladesh and Pakistan. The IPT participated in the event. Banks mentioned a recently introduced bipartisan resolution that called on the United States Agency for International Development (USAID) and the State Department "to halt all partnerships and funding arrangements" with the JI.

In light JI's violent Islamist agenda, Turkey's sponsorship of its activities in Bangladesh and Pakistan and those of its proxy groups in the U.S., not only stymies efforts to bring security and stability in South Asia, but also frustrates U.S. efforts to rein in rising Islamism at home.