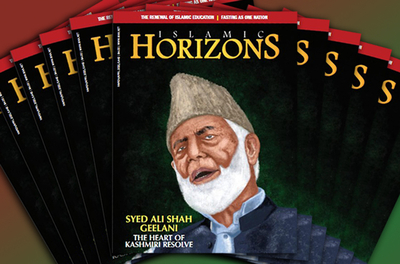 Just days before the 20th anniversary of the 9/11 attacks, American Islamists hosted a memorial ceremony for a hardline Kashmiri separatist leader who had reportedly sympathized with the attacks' mastermind Osama bin Laden and called him a "martyr."

Soon after U.S. Navy SEALS killed the al-Qaida leader in a 2011 raid on his Abbottabad compound in Pakistan, Syed Ali Shah Geelani called on Islamic clerics to pray for the slain terrorist.

"Muslim clergy should organise funeral prayers in their mosques for peace to the soul of Osama bin Laden," Geelani said. "Osama [bin Laden] was not just a person but also an ideology against occupation of Muslim lands by foreigners. Western countries must realise that suppression of Muslims in their lands will result in resistance."

Geelani, who spearheaded the Kashmir separatist movement for over three decades, died Sept. 1.

He was closely affiliated with the Jamaat-e-Islami Jammu and Kashmir (JI J&K), and his mentor was Jamaat-e-Islamic (JI) founder and Islamist ideologue Syed Abu Ala Maududi.

In addition to holding different leadership positions with JI J&K, Geelani, 91, also served as the organization's "Amir-e-Jehad (Head of Jihad)."

These connections were all well known. But they didn't give the Islamic Circle of North America (ICNA)'s social justice arm pause about co-sponsoring the Geelani memorial. ICNA founders support JI's ideology and seek to establish Iqamat Deen, or the Islamic system of life, in North America with the ultimate goal of founding a global Islamic state or Caliphate.

ICNA described Geelani's death as "a great loss to this Ummah [global Muslim community]" and called him "a symbol of determination and courage against illegal Indian rule in Kashmir."

The U.S. Council of Muslim Organizations (USCMO), a coalition of American Islamist organizations, issued a statement calling Geelani "the great defender of the rights and freedoms of the Indian-besieged and -occupied Kashmiri people." Geelani, it said, was a "'symbol of resistance' to the government of India's brutal and draconian policies of oppression in Jammu and Kashmir."

In 2019, India voided a "temporary" constitutional provision – written in 1949 – that divided J&K into two federally-administered territories that are now governed directly by New Delhi. The USCMO since has worked to stoke an anti-India backlash, including organizing protests, lobbying the Organization of Islamic Cooperation (OIC) to "exert maximal pressure on the Indian government to lift its lockdown on Kashmir," and meeting with State Department and United Nations officials to spotlight the "dire humanitarian crisis" in J&K. These concerns are exaggerated and parrot Pakistan's vicious misinformation campaign against India.

While American Islamists continue to propagate the myth of human rights atrocities in J&K, American Enterprise Institute (AEI) scholar Michael Rubin praised the successful conduct of local council elections in the union territory since the Indian action. Billions of dollars have been earmarked for infrastructure and development projects in the region and there has been a decline in terror incidents and terrorist recruitment.

Pakistan has used terrorism to bolster its claim on J&K. That claim is moored in a "Two Nation Theory" pushed by Pakistan's founder, Muhammad Ali Jinnah, that Hindus and Muslims can never "evolve a common nationality."

Based on the theory, Pakistan considers J&K, a Muslim-majority region abutting its border with India, in what Hudson Institute scholar Husain Haqqani describes as the "unfinished business of [the British] Partition." Successive Pakistani civilian and military leaders have propagated radical Islam and engaged in cross-border terrorism to wrest control of J&K from India.

In July 2020, Pakistan conferred its highest civilian award, Nishan-e-Pakistan, on Geelani for his "selfless and relentless struggle and sacrifices" in advocating for the "right to self-determination" in J&K.

Convicted Pakistani spy and lobbyist Syed Ghulam Nabi Fai, who routinely speaks on the "Kashmir crisis" at ICNA conventions and webinars, described Geelani's death as "a colossal loss to the nation of Kashmir." Geelani "was a symbol of humanity and champion of human rights all over the world, be it Palestine, Myanmar, Chechnya, Kashmir," Fai said.

After a U.S. court convicted Fai in connection with a decades-long scheme to secretly receive millions of dollars from the government of Pakistan to influence U.S. policy toward J&K, Geelani rushed to Fai's defense describing him as an "ambassador of Kashmiris and a Jamaat-e-Islami man."

Fai, who then served as executive director of the Kashmir American Council (KAC), served 16 months in prison after pleading guilty in December 2011 to conspiring to act as an agent of the Pakistani government without registering under the Foreign Agents Registration Act (FARA).

The Islamic Society of North America (ISNA), described as the "largest Muslim organization" in the U.S., issued a press release describing Geelani as "a bold and relentless leader, a visionary, an intellectual, and an advocate for justice and human rights in Kashmir and around the world."

ISNA has been tied to the Muslim Brotherhood and its conferences routinely feature rhetoric in support of terrorist groups and other radicalism.

Geelani was on the cover of ISNA's bi-monthly flagship publication Islamic Horizons in March, describing him as "the heart of Kashmiri resolve." The issue included several stories on Geelani, including one penned by his granddaughter Ruwa Shah.

"Aba dedicated his life to Islam and Kashmir's freedom struggle. For him, the two have always been inseparable. This is why, even when he barely had the energy to breathe, he was either reciting from the Quran or talking about Kashmir. 'Do not give up on freedom. Zulm chu ne poshaan! Oppression does not last!,'" Shah wrote.

Shah's father and Geelani's son-in-law Altaf Ahmad Shah was arrested by India's National Intelligence Agency (NIA) in 2017, and accused of receiving funds from Pakistan, including through hawala, for funding terrorism in J&K.

"They were using funds for causing disruption in Kashmir Valley by way of pelting stones on security forces, burning schools, damaging public property and waging war against India," an NIA spokesman said.

Shah remains in custody pending a trial in a special J&K court. In March, the NIA alleged that Shah was given $680,410 by a local youth leader with close ties to terrorist groups to "keep the situation boiling in the Kashmir valley after the killing of [HM terrorist] Burhan Wani."

A CRA audit letter addressed to the ISNA Development Foundation identifies Kashmiri Canadian Council Executive Director Mushtaq Jeelani, Fai, and a U.K.-based Kashmiri separatist Ayub Thakur as "conduits for contacts with Kashmiri militants" and "'associates' in the funding of Kashmir militants." A flow chart included as an attachment to the letter ties the three individuals to Geelani.

In 2018, CRA suspended ISNA-Canada for a year amid concerns it may have "provided resources" to Kashmiri terrorists. A year earlier, ISNA's Islamic Services of Canada's charitable status was revoked for the same reason.

If high-profile Americans paid tribute to Oklahoma City bomber Timothy McVeigh, or Norwegian terrorist Anders Breivik, who killed 77 people in an Oslo bombing and shooting spree at a summer camp because he hated Muslims and multiculturalism, the condemnations would be swift and unequivocal.

Geelani may have done a lot American Islamists agree with. But he was a hardline separatist with known terror ties who considered Osama bin Laden a heroic figure. The open mourning from American Islamists reaffirms their willingness to whitewash Islamist terror and peddle Islamist narratives and lobby causes in support of the global Muslim ummah.