India joined world leaders earlier this month in slamming Turkey's military attack into northern Syria. "We are deeply concerned at the unilateral military offensive by Turkey in north-east Syria," said an Oct. 10 Ministry of External Affairs press release. "Turkey's action can undermine stability in the region and the fight against terrorism."

Turkey launched a major military offensive Oct. 9 against Syrian Kurdish fighters considered by Ankara to be terrorists soon after President Trump announced the withdrawal of American troops from the region. Turkish President Recep Tayyip Erdogan agreed to a ceasefire Thursday following a meeting with Vice President Mike Pence in Ankara that is contingent on a Kurdish withdrawal from a 20-mile swath of land near Turkey's border. But despite the ceasefire, news reports said that air and artillery attacks from the Turkish side continued to target fighters and civilian areas.

India's unusual criticism of Turkey on a global forum is a tit-for-tat response to Ankara's denunciation last month of India's move ending autonomy for the Himalayan Muslim-majority state of Jammu and Kashmir, widely known as Kashmir.

The Kashmiri people are "besieged and eight million people are still stuck in Kashmir, they cannot get out," Erdogan said during a speech at the United Nations. "It is imperative to solve this problem through dialogue and the basis of justice and equality instead of conflict."

Erdogan did not limit his condemnation to India. He also called Israel the cause of "injustice" in the Middle East and vowed Turkey "will continue to stand by the oppressed people of Palestine as she has always done."

But Erdogan is in no position to cast a stone.

Under the leadership of his Islamist Justice and Development Party (AKP), Turkey has become notorious for its support of the international Muslim Brotherhood headquartered in Egypt, and Hamas, the Brotherhood's terrorist offshoot in the Palestinian territories.

Key Hamas leaders have found refuge and an operating base in Turkey. "Turkey continues to be used as a hub for Hamas's operational and financial activity, even after the departure of Saleh al-Arouri," Israel's Meir Amit Intelligence and Information Center noted in a recent report.

Al-Arouri, a founder of Hamas' military wing and member of the terrorist group's political bureau, lived in Turkey until last year. During his time in Turkey, Arouri helped plot Hamas terror attacks. He also praised the "heroic action" of Hamas' al-Qassam Brigades in the 2014 kidnapping and murder of three Israeli yeshiva students.

Turkey's border earlier served as a "jihadist highway" for foreign fighters to cross into Syria to join forces with the Islamic State.

Erdogan also helped Turkish terror financiers evade sanctions against Iran. And his ambitions to be seen as the new sultan of the global Muslim ummah, or community, have now led Turkey to expand support for Islamists and their terror proxies to South Asia.

India's ruling Bhartiya Janata Party (BJP) annulled a "temporary," 70-year-old constitutional provision on Aug. 5 that gave Jammu and Kashmir special autonomous powers to make its own laws outside of defense, foreign affairs, finance, and communications. The action divided the state into two federally-administered territories that will now be governed by New Delhi.

The Indian government justified the action by saying the earlier stipulation fomented separatism and cross-border terrorism, and encouraged corruption and family rule in the state. Scrapping the temporary measures now gives Jammu and Kashmir residents the same rights as other Indians, and can boost economic development and job opportunities in the region.

Islamists around the world, including in the U.S., joined Pakistan in reacting angrily to the Indian repeal. Pakistan downgraded diplomatic relations and suspended bilateral trade with India. Turkey quickly protested the Indian move. Erdogan assured Pakistan of "Turkey's steadfast support."

Turkey and Pakistan enjoy close ties which are rooted in support for Ankara that preceded Pakistan's creation. Muslims in the Indian subcontinent supported Turkish efforts to preserve the authority of the Ottoman Sultan as the Caliph of Islam following the collapse of the Ottoman Empire in 1922. Ankara has traditionally sided with Pakistan on the Kashmir issue. But this was the first time that Erdogan – in his increasingly assertive "neo-Ottoman" role – publicly excoriated India for its Kashmir policy.

India expressed "deep regret" about Erdogan's comments on a matter it believes is "purely internal to India." A $2 billion deal with a Turkish defense company for fleet support ships has since been put on hold. The Turkish company's growing partnership with Pakistan could pose "grave consequences for India's security," an Indian defense official was reported saying.

As Ankara, under the control of the Islamist AK Party, publicly attacks New Delhi on its Kashmir policy, it has been working surreptitiously with South Asian Islamist groups and their North American proxies to advance Islamism and undermine stability and secular democracy in the region.

The Union of NGOs of the Islamic World (UNIW) is at the center of Turkey's effort to support activities by the South Asian Sunni revivalist movement Jamaat-e-Islami (JI) and its North American affiliates.

Formed in 2005 in Istanbul with Erdogan's blessings, the Islamist network includes 354 NGOs from 66 countries, including the United States. Through a global network of Islamist and terror-tied organizations such as the Humanitarian Relief Foundation (IHH), World Assembly of Muslim Youth (WAMY), Zamzam Foundation (Somalia), Islamic Relief (UK), International Islamic Relief Organization (IIRO), UNIW seeks "to create an ummah consciousness" among its members and unite "against to (sic) the western world which want to weaken the Islamic World by their dirty tricks and try to separate it from each other although they are unions among themselves." 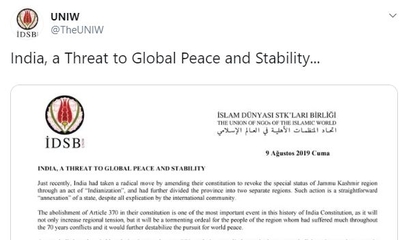 UNIW advocates strongly for the Kashmir cause. Soon after the recent Indian decision, UNIW issued a press release calling India "a Threat to Global Peace and Stability..." It denounced the "annexation" of Jammu and Kashmir. It claimed that if the international community does not respond effectively to the crisis, "this immoral decision will forever be remembered as one of the most illicit incident (sic) in political history."

Kashmir has been a source of tension between India and Pakistan since the two countries gained independence from British rule in 1947. During the resulting partition of the subcontinent, hundreds of independent kingdoms which were ruled by native princes and were allied with British India had to choose to be part of India or Pakistan. After an invasion by Pakistan-backed tribal invaders, the Hindu ruler of Muslim-majority Jammu and Kashmir signed an Instrument of Accession to become part of India. Pakistan disputes this accession and claims the state in its entirety.

UNIW came out in support of Turkey's recent bloody attack on stateless Kurds, and accused the United States and western countries of supporting terrorists in the region.

"Turkey is not against the Kurdish people in the region. It is engaging in [an] operation to fend off terrorist[s] that had been fed by the USA and western countries for 40 years to conduct acts of terror on the people of this region," said an Oct. 11 UNIW press release. "Western countries that had enacted treacherous policies in Middle East are the main factors for the instability of the region, especially in Syria."

Helping Hand for Relief and Development (HHRD) and Kashmir American Council (KAC) are U.S.-based UNIW members and work closely with the umbrella group.

HHRD is the overseas charitable arm of the New York-based Islamic Circle of North America (ICNA), a prominent JI "affiliate" that advocates for Kashmiri self-determination. It collaborates closely with JI's charitable wing, the Al Khidmat Foundation, that has close ties to Kashmir jihadists, including the U.S.-designated Hizbul Mujahideen (HM) and its leader Syed Salahuddin.

Fai, who now advocates for the Kashmir issue through the World Kashmir Awareness Forum, also serves as a UNIW board member.

Fai reportedly praised Erdogan's UN remarks, saying, "Erdogan conquered the hearts of the people of Kashmir with his statement ..." and "provided the most reasonable, practical and applicable option for solving the Kashmir issue."

Fai, along with KAC President Imtiaz Khan, attended a Kashmir Solidarity Day last February in Ankara that was co-sponsored by the Pakistani embassy. There, Khan claimed the Kashmiris gave Indian Prime Minister Narendra Modi a "resounding rebuff" when he visited the region. "He was greeted with empty streets and shuttered shops ... to convey to him the feelings of the people of Kashmir." Khan was alluding to a call by Kashmiri separatist leaders for a "shutdown" in the Kashmir Valley ahead of Modi's February visit to Jammu and Kashmir. Indian intelligence has been reported to have accused the separatist leaders of receiving funding from Pakistan to fuel unrest and carry out jihadist activities in the region.

Last December, Fai was the sole speaker at a seminar titled, "The Geopolitics of the Kashmir Dispute and Its Future Prospects," jointly sponsored by the Center for Islam and Global Affairs (CIGA) at Istanbul Sabahattin Zaim University (IZU) and the Pakistan-Turkey Friendship Foundation.

Several JI-affiliates that engage in "humanitarian work" in Pakistan-administered Kashmir are UNIW members. In an earlier investigation, the IPT discovered that the leader of the Al Khidmat Foundation's Karachi chapter is closely tied to Kashmiri jihadist groups. The HM is JI's armed wing and has waged several attacks in the region.

Another JI charity, Relief Organization for Kashmiri Muslims (ROKM), founded in 1990, provides assistance to Muslims in Pakistan-administered Kashmir, also known as "Azad Kashmir" ("Free Kashmir"). An organization profile on the UNIW website states that ROKM "supports the orphaned children of the martyrs of Kashmir."

ROKM came under Canadian Revenue Agency scrutiny last year when an audit discovered that $90,000 was gifted by a prominent Islamist group to ROKM probably found its way to the Hizbul Mujahideen in Kashmir. The Islamist group was suspended for a year in September 2018.

Another UNIW member, Khubaib Foundation Pakistan, is a partner of the Turkey-based IHH Humanitarian Relief Foundation that has been designated a terrorist group by U.S. allies Israel, Germany and the Netherlands.

Under Erdogan's rule, Islamism has gradually replaced the modern Turkish state's secular foundations. Since assuming office in 2003, Erdogan has neutralized the country's secular military establishment and secured control over Turkey's independent judiciary and press. His repressive response to a failed July 2016 coup attempt, in which he sacked thousands of government officials and journalists in a sweeping purge, has driven the former secular Turkish state down the path of Islamist totalitarianism.

Erdogan's renewed partnership with Pakistan, support for jihad and a pan-Islamist ideology, and an increasingly assertive role as the modern-day caliph of the Muslim ummah, makes India's task of bringing normalcy back to Kashmir more challenging.