Muslim Brotherhood officials who have made extreme statements will be barred from receiving visas to enter the United Kingdom, Prime Minister David Cameron said Thursday.

The statement accompanied the public release of findings in a surprisingly candid government study of the Egyptian-based Islamist group, which briefly rose to power in 2012. That reign ended when the army, in the wake of massive public demonstrations, removed President Mohamed Morsi.

Many Brotherhood goals and activities "run counter to British values of democracy, the rule of law, individual liberty, equality and the mutual respect and tolerance of different faiths and beliefs," Cameron said. "The Muslim Brotherhood is not the only movement that promotes values which appear intolerant of equality and freedom of faith and belief. Nor is it the only movement or group dedicated in theory to revolutionising societies and changing existing ways of life. But I have made clear this government's determination to reject intolerance, and to counter not just violent Islamist extremism, but also to tackle those who create the conditions for it to flourish."

Cameron's direct assessment is the latest example among many showing the stark contrast between him and the Obama administration, which met repeatedly with Muslim Brotherhood officials during and after the Arab Spring. In at least one case, the government helped a Brotherhood delegation skip routine screening by U.S. Customs and Border Protection upon landing in America.

Sir John Jenkins, Britain's former ambassador in Saudi Arabia who was one of the two lead investigators, reported that the Brotherhood's year in power in Egypt "did not do enough to demonstrate political moderation or a commitment to democratic values, had failed to convince Egyptians of their competence or good intentions, and had subsequently struggled to draw lessons for what its failure in Egypt meant for its future."

He saw little evidence that the experience led to any meaningful change in Brotherhood thinking.

The Obama administration saw things differently, with the State Department in 2011 accepting an official's claim that the Brotherhood "was not the extremist organization the West feared." When Obama traveled to Cairo in 2009 to lay out his foreign policy goals, Muslim Brotherhood officials were given front-row seats.

The White House praised Morsi early in his tenure. UK officials interacted with the Brotherhood, too, but the report concludes "official engagement with the Egyptian Muslim Brotherhood produced no discernible change in their thinking."

The IPT's documentary, "Jihad in America: The Grand Deception," traced the history of the Brotherhood's ideology and goals.

In the U.S., the National Security Council is reviewing the report, a spokesperson told the Investigative Project on Terrorism in an email. The spokesperson emphasized that the UK isn't outlawing the Brotherhood, and indicated it already disagreed with Cameron's pronouncement. The "political repression of non-violent Islamist groups has historically contributed to the radicalization of the minority of their members who would consider violence. The de-legitimization of non-violent political groups does not promote stability, and instead advances the very outcomes that such measures are intended to prevent," the NSC email said.

But the UK report emphasized the Brotherhood's support for Hamas, calling it "an important priority for the MB in Egypt and the MB international network" during the past decade. And it found that Brotherhood members "are prepared to countenance violence – including, from time to time, terrorism - where gradualism is ineffective."

Brotherhood officials rejected the report's findings before they even read it. In an English language statement, the group called the UK report "deeply flawed" and promised a court challenge. The report "unfairly condemns millions of Muslims and non-Muslims across the world, many of whom are British citizens," said Amr Darrag, who serves on the executive board of the Brotherhood's Freedom and Justice Party. Darrag also called the Brotherhood "the Middle East's largest democratic organisation." 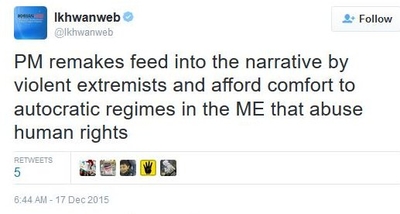 A Brotherhood Twitter post went further, saying the report somehow will "feed into the narrative by violent extremists..."

The Brotherhood remains secretive in the UK, "and use London as a base for activism elsewhere."

British writer Douglas Murray praised the report as "a small triumph," but highlighted its discussion about Brotherhood-tied charities and mosques operating in the country. Barring MB officials from entering the UK is fine, but does nothing about Brotherhood members already present who "are now known to be working for an entity with some members who have been officially labelled as possibly 'extremist' by the UK government."

The report's authors found UK residents with Brotherhood connections who previously "held out the prospect and ambition of an Islamic state in this country as elsewhere."

Just Monday, the White House hosted a representative of the Council on American-Islamic Relations (CAIR), a group whose creation was blessed by the Muslim Brotherhood.

"Jihad in America: The Grand Deception" showed the depth of Brotherhood-connected groups in the United States.

Cameron has spoken directly about the need to openly address Islamist extremism before. "Our new approach is about isolating the extremists from everyone else, so that all our Muslim communities can be free from the poison of Islamist extremism," he said in a July speech. "Now for my part, I am going to set up a new community engagement forum so I can hear directly from those out there who are challenging extremism."

When the two leaders appeared together at the Unite Nations in September, Cameron told Obama "we have to be frank that the biggest problem we have today is the Islamist extremist violence that has given birth to ISIL, to al-Shabab, to al-Nusra, al Qaeda and so many other groups."

Now the UK has provided the public with details of a genuine fact-finding mission about a global Islamist movement which seeks to subvert the policies of Western governments. It is time for the United States to find the same courage.