Morsi Removed, Muslim Brotherhood Down…but is it out? 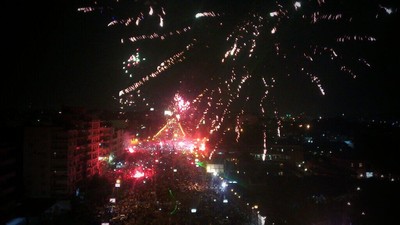 After millions of Egyptians took to the streets to protest the Muslim Brotherhood's Islamic rule, the Egyptian military, under the command of General Abdel Fattah el-Sisi, removed Egyptian President Mohamed Morsi from office Wednesday. In his place, the army's transition plan calls for Chief Justice of the Egyptian Supreme Constitutional Court Adly Mansour to take over until new elections can be held.

According to Egypt's Al Ahram, el-Sisi said the army plan calls for:

2. Holding early presidential elections. The High Constitutional Court head will be in charge of the country until then;

3. Forming a national coalition government; and

4. Forming a committee to look into amendments of the constitution."

Morsi's whereabouts were not immediately known, but El-Sisi's televised remarks prompted cheers and fireworks throughout Cairo's packed Tahrir Square. El-Sisi was joined by Ahmed El-Tayyeb, the Grand Imam of Al-Azhar University – a bedrock of Sunni theology, and Coptic Orthodox Patriarch Tawadros II. Copts increasingly found themselves under physical and legal attacks during Morsi's year in office. The Constitutional Court, meanwhile has stood in staunch opposition to Morsi in the past and may be in position to develop a more diverse and moderate government focused on Egypt's economic needs.

Morsi was seen as failing in that regard, distracted by attempts to consolidate power for the Muslim Brotherhood and impose religious law on Egypt's 80 million citizens.

Here's what we know about Mansour; born in 1945 and a 1967 graduate from Cairo Law, Mansour was appointed to the high court by Morsi to replace outgoing Chief Justice Maher el-Beheiry. He has served on the court since 1992 but just took over as chief justice on Monday.

In addition to Mansour, the Supreme Constitutional Court has 10 additional justices. As a proactive force in the Egyptian legislative process, the court has the duty to review all legislation for constitutionality and approves or rejects election laws before they go before parliament and the president.

While many Muslim Brotherhood media outlets remain offline and under the control of Egyptian military forces, a Twitter feed speaking for Morsi called the army's action a coup "rejected by all free men who struggled for a civil democratic Egypt."

And a popular Muslim Brotherhood website had this to say:

"Urgent: Conspiracy against legitimacy…A military coup which thwarts the people and returns Egypt to tyranny…Millions respond sit in the squares of Egypt in support of legitimacy...and Ulema (educated Muslim legal scholars) condemn the coup and stress the obligation of supporting the elected President..Figures of the former regime are returning to the scene on the blood of the martyrs of the revolution of January 25..'For, God always prevails in whatever be His purpose: but most people know it not.' (Quran 12:21)"

Similarly, Mohamed El-Betagy, a member of the Brotherhood's ousted Freedom and Justice Party, questioned the legitimacy of the coup and called for a "rejection of the coup with complete peacefulness and adhering to our just position." El-Betagy went on to paint the Muslim Brotherhood as the victim of attack and mob-rule that could have been accomplished through "peaceful democratic mechanisms."

But the Egyptian military's move, and the massive euphoria it generated, marks a stark rejection of Muslim Brotherhood rule and makes the 80-year-old Islamist movement's future unclear. It remains the best organized political group in Egypt and likely will remain viable in some way. But how it reacts to Morsi's ouster may determine whether it retains any political influence.

Frank Spano serves as the Director of National Security Policy for The Investigative Project on Terrorism.

Read our history with Shariah/Islam

Who said this, to whom, when, why and what have we ever done about it? Would you consider this statement to be contrary to our Constitution, our way of life, a danger to our National and Homeland Security? Would you think these are words of an enemy? Surely, our government has studied this but where is the reports?

"The Ambassador answered us that it was founded on the Laws of their prophet, that it was written in their Koran, that all nations who should not have acknowledged their authority were sinners, that it was their right and duty to make war upon them wherever they could be found, and to make slaves of all they could take as Prisoners, and that every musselman [muslim] who should be slain in battle was sure to go to Paradise."

This statement was a part of a March 28, 1786, letter from John Adams and Thomas Jefferson to John Jay, the United States Secretary of Foreign Affairs, Continental Congress, concerning their conversation with the Tripoli ambassador as to why his pirates/terrorists hijacked our merchant ships, stole the ships and cargo while holding the sailors for ransom. (Thomas Jefferson. "The Papers of Thomas Jefferson". Princeton Univ. Press. pp. 9:358.)

Why are we failing to mention the obvious in the 1786 letter that still exists today? Here are the main points:

a. "it was founded on the Laws of their prophet";

b. "that it was written in their Koran";

c. "that all nations who should not have acknowledged their authority were sinners";

d. "that it was their right and duty to make war upon them wherever they could be found, and";

e. "to make slaves of all they could take as Prisoners, and";

f. "that every musselman [muslim] who should be slain in battle was sure to go to Paradise."

Has our government studied this and if they have, where are the published reports? See actual letter here: http://memory.loc.gov/master/mss/mtj/mtj1/005/0400/0430.jpg

This is the typed version: http://freepages.misc.rootsweb.ancestry.com/~argyll/From%20JOHN%20ADAMS%20And%20THOMAS%20JEFFERSON.pdf

Please take the time to read an article by Gerard W. Gawalt, a manuscript specialist for early American history in the Manuscript Division, Library of Congress titled, "America and the Barbary Pirates : An International Battle Against an Unconventional Foe. It can be found at: http://memory.loc.gov/ammem/collections/jefferson_papers/mtjprece.html

Go online to John Adams Koran: The Koran: commonly called the Alcoran of Mohomet (1806). Once on the link, look to the left and link to Read: then to To the Reader and see what he says about Islam. He didn't think much of it.

Within minutes of the coup, tens of TV stations were closed, a witch hunt against the president supporters had already started. The prime minister was tried and sentenced to jail one day before the coup. Millions of supporters of the elected president are surrounded by military and police. This is definitely a military coup and a reinstatement of marshal law.