"The Reason is Religion, Mom" 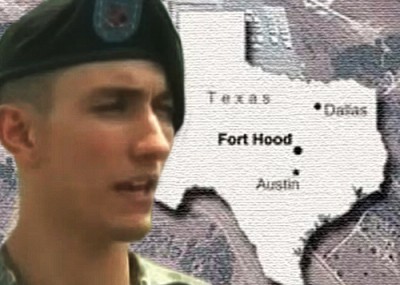 Abdo had been arrested for plotting an attack on a restaurant in Killeen popular with soldiers from nearby Fort Hood. He would set off a bomb inside the restaurant, then shoot and kill as many survivors as possible as they scrambled out to safety.

His mother asked the obvious question. Why?

Jurors convicted Abdo Thursday of attempting to use a weapon of mass destruction and attempted murder after hearing and seeing the answer on video.

"The reason is religion, Mom."

He had to act in response to American military actions in Afghanistan and Iraq. As a Muslim, he considered those affected by such actions to be family. "When bad things are happening," he said, "you have to do something about it."

His mother couldn't comprehend her son's logic, to which he explained, "it may seem crazy from the outside, but it's not."

Abdo's reasoning echoes the justification offered by a series of attempted homegrown jihadists. If America is killing Muslims, the logic goes, Muslims must do whatever they can to stop it.

Abdo chose Fort Hood as a target because that's where Army psychologist Nidal Malik Hasan opened fire a year earlier, killing 13 people. Hasan reportedly shouted "Allahu Akhbar" as he opened fire, and had built a disturbing record of justifying suicide bombings and endorsing other radical ideas during his time in the service.

Hasan had been in direct contact with American-born al-Qaida cleric Anwar al-Awlaki before the attack. Abdo carried copies of al-Qaida's English-language magazine, Inspire, which included articles from Awlaki invoking theology in urging Muslims in America to wage attacks at home.

"We as Muslims should seek the wealth of the disbelievers as a form of jihad in the path of Allah," Awlaki wrote in one issue. "That would necessitate that we spend the money on the cause of jihad and not on ourselves."

Despite the self-professed motives, Islamist advocates argue that radical religious interpretations should not be discussed in assessing terrorist plots by Muslims. The Council on American-Islamic Relations (CAIR) even conspired with a political scientist in 2010 to gin up sales of the professor's book, which claimed that religious extremism was a minimal factor in suicide bombings.

The group tries to pressure people out of discussing Islamic radicalism in general.

In the wake of Hasan's Fort Hood shooting spree, CAIR national spokesman Ibrahim Hooper told a radio interviewer that Hasan's religious beliefs shouldn't be considered as a factor. "He could have just snapped from some kind of stress. The thing is when these things happen and the guy's name is John Smith nobody says well what about his religious beliefs? But when it is a Muslim sounding name that automatically comes into it."

A week after the massacre, when Hasan's beliefs and contacts with Awlaki were well established, CAIR issued a press release arguing that those who did discuss religion were exploiting the tragedy to "promote hatred and intolerance."

And military leaders have shied away from the issue, omitting any reference to it in a report on Hasan's Fort Hood attack. That drew a strong rebuke last year in a report by the Senate Committee on Homeland Security and Governmental Affairs.

It is just as odd to see the Obama administration take pains to avoid even uttering the phrase "radical Islam," opting instead for a generic "violent extremism."

Examples of homegrown terror conspirators invoking Islam as a justification include:

· Daniel Patrick Boyd, who was recorded scouting the U.S. Marine Corps Base at Quantico, Va., after failing in several attempts to wage jihad abroad. "The American troops even occupy the place of our two holy sites, Mecca and Medina," he said in a recording by an informant. "This isn't some fantasy, this is a reality. They are there and they are helping the Jews be in our third holy site, Aqsa. That would be our deen [religion]. This was forbidden by the Prophet on his death bed, he forbid that they can be in Mecca and Medina and there they are."

· Faisal Shahzad, whose car bomb parked near Times Square failed to detonate in May 2010. "This time it's the war against people who believe in the book of Allah and follow the commandments, so this is a war against Allah," Shahzad said at his sentencing. "So let's see how you can defeat your Creator, which you can never do. Therefore, the defeat of U.S. is imminent and will happen in the near future, inshallah [God willing], which will only give rise to much awaited Muslim caliphate, which is the only true world order."

· Farooque Ahmed, who scouted subway stations along the Washington, D.C. Metro line in hopes of aiding a bombing plot. "There's an incessant message that is delivered by radical followers of Islam," Ahmed's lawyer said at sentencing, "that one cannot be true to the faith unless they take action, including violent action, most especially violent action … that is a message that can unfortunately take root in individuals who feel like if they don't do something, that they literally will not find salvation under their faith."

· Jesse Morton, a founder of the radical website Revolution Muslim, pleaded guilty to charges stemming from threats made against the producers of the animated comedy "South Park," after the show featured a character supposed to be the prophet Muhammad fully shrouded in a bear suit. In a speech posted online, "Morton asserted that Islam's position is that those that insult the Prophet may be killed under Shariah law just as if they were fighting with a weapon," a statement of facts that accompanied his guilty plea said. "Morton exhorted his listeners to fight the 'disbelievers near you.'"

Add Abdo to the list. He had all the components to make a bomb in his hotel room when police arrested him. He had divine inspiration.

None of that would have happened had he not felt a religious duty to kill his fellow soldiers. The sooner the government is willing to acknowledge this ideology, the sooner concrete steps can be taken to produce an effective program to neutralize the radical message.