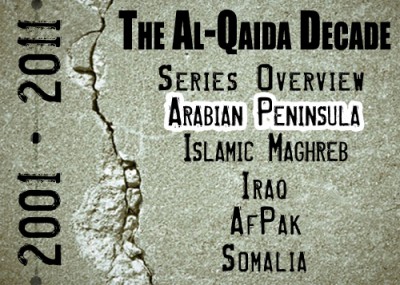 Multiple attempted attacks on Western targets, an active Arabic and English media wing, and newly seized territory – all of these factors make al-Qaida in the Arabian Peninsula (AQAP) one of the most successful and potentially lethal franchises of the world's most famous terrorist organization.

"AQAP has emerged as the most dangerous regional node in the global jihad," new CIA Director David Petraeus said in testimony Tuesday.

Unique for al-Qaida, AQAP has built a name for itself in the English-speaking world, mainly through the writings and speeches of American cleric Anwar al-Awlaki.

A popular cleric who draws from American pop and literary references as easily as from Islamic sources, Awlaki has inspired and directed numerous terrorism attempts against American targets. With notable involvement in the Fort Hood Shooting and 2009's Christmas Day Bomber, the terrorist mastermind was suspected of involvement in more than 10 plots in 2010.

"When you look at the trajectory of Awlaki-AQAP from its origins in 2009, you see an incredible learning curve - very agile, very opportunistic, and increasingly lethal," said Christopher Boucek of the Carnegie Endowment for Peace. And with growing chaos in the group's home base, the fragmenting country of Yemen, AQAP will likely remain one of America's most active and dangerous enemies.

By 2010, CIA analysts regarded the group a more urgent threat to American security than the core al-Qaida group. Last fall, it nearly pulled off a series of spectacular attacks by placing bombs made with the potent explosive PETN inside toner cartridges that were to detonate on cargo airplanes.

The current incarnation of al-Qaida in the Arabian Peninsula was officially formed in January 2009, when Saudi Arabian and Yemeni al-Qaida members announced the establishment of a new joint front in the region. This development was intended to fill the gap in al-Qaida's mission to liberate the Arabian Peninsula and to strike Western targets, goals that had been disrupted by Saudi Arabia's successful campaign against local militants from 2003-07.

But the group's roots in the country and the region go deeper. As the war in Afghanistan wound down, returning fighters formed the Mujahideen Military Committee in the Arabian Peninsula, headed by Saudi citizen Yusuf Salih Fahd al-Ayiri. The group's four original cells were trained directly by Osama bin Laden in the mid to late 90s, and were directed by al-Qaida's central branch in Afghanistan and Pakistan.

Despite the successful translation of al-Qaida's message to Saudi Arabia, this early group experienced serious setbacks. According to Jane's Intelligence, al-Ayiri was killed in 2003 while reluctantly leading a terror campaign order by al-Qaida headquarters. His death, along with the deaths of other leaders and the neutralizing of most of the cells, pushed survivors to form a group by AQAP's name but without its current reputation for attacks. The renewed group largely focused on supplying the efforts of al-Qaida in Iraq, which was fighting a guerilla war against American troops and the nation's Shiite population.

Al-Qaida also used the Arabian Peninsula as an early launching point against Western targets. The first Yemeni al-Qaida attack on an American target came in 1992, when local al-Qaida militants unsuccessfully tried to bomb military barracks housing over 100 American soldiers who were on their way to Somalia. In 2000, the bombing of the USS Cole in the port of Aden was more successful, crippling the vessel and killing 17 U.S. sailors. However, congressional reports show that al-Qaida had only a minimal presence in Yemen at the time, with the focus of the fighting remaining in the Saudi kingdom.

This situation didn't last. Following extreme pressure from Saudi Arabian counterterrorism efforts, the jihad was forced to move to other areas of the peninsula. Yemen's domestic terrorist scene had also grown with the escape of 23 al-Qaida members from Yemeni jail in February 2006, including several leaders.

The advantages of Yemen's chaos and regionalism led to the critical merger in 2009. Since then, AQAP has proved to be the region's most attractive base of operations, particularly for the goals of ousting local regimes and striking the far enemy in the West.

AQAP has flourished following the merger of Saudi Arabian and Yemeni al-Qaida units. With an estimated strength between 300 and several thousand fighters, the group has pushed for campaigns at home and abroad. Anwar al-Awlaki's participation and the formation of a media wing have also given the group an edge, among both English and Arabic speaking jihadis.

Its attacks have shown both ingenuity and persistence, despite a low success record. "In 2010, AQAP leaders released a direct appeal to Saudi security and military personnel to turn their weapons on government officials and royal family members," according to a Congressional Research Service report about al-Qaida and Affiliates. The move was followed up by the unsuccessful attempt to kill Saudi Prince Mohammed Bin Nayef, head of Saudi Arabia's counterterrorism operations. But the move showed that the organization was thinking creatively, as the terrorist used the narcotics smuggling technique of hiding explosives in his rectum.

Part of the organization's cleverness lies in its unusual structure. The group's primary leadership is focused on recruiting from the local population and carrying out regional attacks, but an English-speaking faction run by Awlaki has vastly expanded the group's reach.

Awlaki's influence derives from his energetic preaching style, a body of non-extremist recordings, and his ability to personally connect with would-be terrorists, particularly through the Internet. Awlaki's blog was a gathering place for militants, who read posts from the popular preacher and used the comments section as a web forum. The blog was taken down following the Fort Hood attack, after Awlaki praised the shooting in a post. It also quickly became clear that Nidal Hasan corresponded with him over the Internet. Awlaki then turned to email and a newly developed English media outlet to recruit followers.

In June 2010, American traitor Samir Khan launched the Inspire Magazine, which brought Awlaki to a new level of prominence. Featuring both the practical and the ideological inspiration to carry out attacks, Inspire featured sections by Awlaki and others that fueled new and innovative types of terror.

Articles like "Build a Bomb in the Kitchen of Your Mom" and the "Open Source Jihad" series called for the bombings of apartment buildings, ramming weaponized trucks into crowds, and a variety of other methods. Inspire also claimed responsibility for the building of several attempted mail bombings on cargo planes. In a special edition, the magazine provided details, including the cost, of the cargo plot, which it dubbed "Operation Hemorrhage."

The influence of Inspire and the spread of the AQAP's Sada al-Malahim magazine were accompanied by other videos and publications. A series called "Martyrs of the Peninsula" focused on the stories of individual fighters, showcasing the best and most dangerous of the organizations warriors.

Although AQAP thrives on the fringes of Yemeni society, Yemen's Arab Spring has made a profound effect on the organization. Tensions in the fragile nation have broken the already weak link that many of Yemen's regions have with the capital Sanaa, and AQAP has stepped in to capitalize on the chaos.

Militants from the group raided an ammunition factory in the city of Ja'ar in May, replenishing their arms supply. Later that month, al-Qaida and allied militants seized the port and regional capital Zinjibar, a small city in southern Yemen. It was the largest population center seized by organization since its founding, and highlighted territorial gains made in other regions [see map] including Abyan, Marib, Shabwa, and Lahj.

Although controlling a population means learning how to govern, it also means new recruits and a place to call home. AQAP did just that a few days after the seizure of Zinjibar, declaring the southern province of Abyan as a new Islamic Emirate. Although the group has been bogged down in trying to conquer new territory, its successes have only emboldened it.

The assassination of Osama bin Laden has also breathed a new life into the group's efforts to attack the West. "What is coming is greater and worse, and what you will be facing is more intense and harmful," threatened the group's main leader Nasser al-Wuhayshi. Although his suspected death may have harmed his plans to be a part of that campaign, AQAP remains one of America's greatest threats in the coming decade.