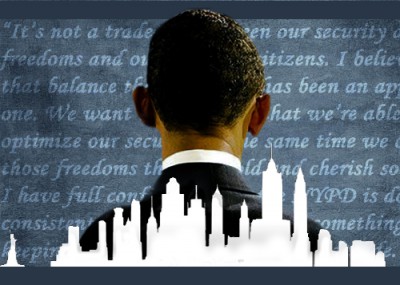 In remarks made at NYPD headquarters a week ago, White House counter-terrorism adviser John Brennan expressed his "full confidence that the NYPD is doing things consistent with the law, and it's something that again has been responsible for keeping this city safe over the past decade."

Brennan's comments triggered immediate outrage from Islamist groups, who claim that the NYPD violated Muslim civil rights with surveillance programs involving public and online activity that were disclosed in a series of Associated Press reports.

A group called Muslim Advocates issued a statement the same day, calling Brennan's comments "appalling" and demanding that President Obama "quickly and clearly repudiate Brennan's comments and reassure the American people that his administration will not tolerate or condone racial and religious profiling by any federal or local law enforcement agency."

The Muslim Public Affairs Council (MPAC) responded similarly, asking for "immediate public clarification," or else. MPAC's Haris Tarin threatened "There are plenty of robust partnership models that both communities and the government have invested in and those partnerships will be jeopardized if NYPD's current tactics are not halted, and its programs are not adjusted to more successful initiatives."

Muslim Advocates and MPAC got their wish when the White House caved on Tuesday and issued a clarification saying Brennan "never approved of described press accounts of alleged NYPD surveillance … Rather, he was stating that everyone in the counterterrorism and law enforcement community must make sure we are doing things consistent with the law."

The NYPD affirmed its activities as legal and proper. "There is no constitutional prohibition against a police department collecting information," city senior counsel Peter Farrell said in February.

The NYPD's surveillance program has been a source of public debate for months. It is difficult to imagine that Brennan did not consider this in preparing to address the department. On the other hand, he's the same official who advocated reaching out to "moderate" elements in the terrorist groups Hizballah.

The episode demonstrates how deeply both groups have gained influence within the Obama administration.

As we've noted, Tarin is a frequent guest at White House events, including its Iftar Dinner during last Ramadan, President Obama's 9/11 Memorial at the Kennedy Center. Obama called Tarin personally last July to commend him for his and MPAC's work.

Muslim Advocates Executive Director Farhana Khera has also been to the White House several times in the past 2 years and says she worked with the administration to create a list of prohibited charities and their leaders for donors to search before sending contributions.

In a letter to Khera last November, Brennan said he was listening to Muslim Advocates when it came to eliminating law enforcement training material the group complained inappropriately characterized Islam saying "Your letter requests that 'the White House immediately create an interagency task force to address this problem,' and we agree that this is necessary."

In February, the government purged more than 1,000 documents and presentations previously used in training programs that were deemed inaccurate or offensive to Muslims.

Khera testified before a Senate Judiciary subcommittee hearing in March 2011, where she stood by her published advice on the Muslim Advocates' web page advising people "not to speak with law enforcement officials without the presence or advice of an attorney."

Khera accused the FBI of violating Muslim civil rights in America by casting a series of counter-terrorism sting operations as entrapment. That drew a rebuke from Attorney General Eric Holder during a speech in December 2010 at a Muslim Advocates event.

"Those who characterize the FBI's activities in this case as 'entrapment,'" Holder said, "simply do not have their facts straight or do not have a full understanding of the law."

Holder, however, agreed to a preliminary review of the NYPD's surveillance program but no formal investigation has been launched. The group asked the attorneys general in New York and New Jersey to initiate similar state investigations. New York Attorney General Eric Schneiderman declined.

A Muslim Advocates statement called Schneiderman's position "deeply disappointing" and cowardly. "We had hoped that Attorney General Schneiderman would have had the moral courage to do the right thing and uphold the civil rights of Muslim New Yorkers, many of whom have been spied on by their police force simply because of their faith, not based on any wrongdoing. By their actions, Mayor Bloomberg and now Attorney General Schneiderman are sending a deeply disturbing message to American Muslims in New York and across the country: they are not deserving of equal protection of our laws."

In testimony submitted for a congressional hearing on the subject, Muslim Advocates argued that, "Our nation has not seen such widespread abuse, discrimination and harassment by federal law enforcement since the J. Edgar Hoover era."

But the overwhelming majority of NYPD's surveillance came in public settings.

"You can go to open meetings and you can go on open websites and look and see what's there and that's really all we've been doing," said New York Mayor Michael Bloomberg.

His position is notable because of his past statements criticizing treatment of Muslims in New York. Bloomberg passionately defended the proposed "Ground Zero mosque," saying opponents "ought to be ashamed of themselves."

And he criticized NYPD for showing the documentary "The Third Jihad" as part of its training programs. Somebody [at the NYPD] exercised some terrible judgment," he said in January.

It also is a mistake to assume Muslim Advocates, MPAC and other critics speak for Muslim Americans. Dozens rallied in support of NYPD in early March. On Thursday, physician and author Qanta Ahmed argued that there's a reason for law enforcement to root out dangerous extremism – it exists.

"Our lawmakers and counterterrorism experts seek only to identify and disarm dangerously seditious ideologies, not races or religions," Ahmed wrote in a New York Post guest column. "And these ideologies — radical or political Islamism and other derivatives — are conceived and proliferating only among pockets of the highly diverse Muslim Diaspora."

The White House has sent conflicting signals on the surveillance debate. Holder called the disclosures "disturbing" and vowed a preliminary review. Then Brennan went to New York and hailed the department for keeping the city safe.

"We're going to continue to face these threats, these homegrown threats that are particularly challenging," he said. "There are individuals here who may be incited, encouraged, invigorated by what they see overseas, what they see on the Internet. And there are some tough decisions, and there are some inherent tensions. But it's not a trade-off between our security and our freedoms and our rights as citizens. And I will say that I believe that that balance that we strike has been an appropriate one. We want to make sure that we're able to optimize our security at the same time we optimize those freedoms that we hold and cherish so dearly."

Now the White House says Brennan wasn't talking about the surveillance controversy when he said the balance struck "has been an appropriate one."

He certainly didn't criticize it.

Appeasement of Muslims is submission to Islam. Every single time.