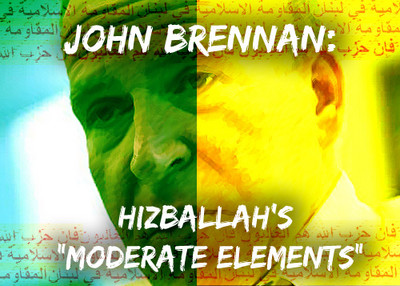 The suggestion from John Brennan, assistant to the president for counterterrorism and homeland security, is drawing criticism from those who say Hizballah's very nature precludes moderation.

"Hizballah is a very interesting organization," Brennan said Tuesday. Speaking at a conference sponsored by the Nixon Center in Washington, Brennan said the group had evolved from "purely a terrorist organization" into one with members in the Lebanese Parliament and cabinet.

"There is [sic] certainly the elements of Hizballah that are truly a concern to us, what they're doing," Brennan said. "And what we need to do is to find ways to diminish their influence within the organization and to try to build up the more moderate elements."

Hizballah, a close ally of Iran, has a long history of terrorism and politically motivated thuggery. These include actions like the bombing of the U.S. Marine barracks in Beirut; the torture-murder of Americans like this, this, and this; terrorist attacks against Israel like these and violence like this targeting other Lebanese Muslims.

In a recent speech, Hizballah boss Hassan Nasrallah categorically rejected making peace with Israel. He said any dialogue with Washington would only occur under conditions dictated by Hizballah.

Nasrallah made similar remarks a year ago after British officials discussed overtures toward Hizballah's political wing. U.S. officials publicly disagreed with the idea, expressing revulsion about the group and saying, "We don't see the differences between the integrated leadership that they see."

And it's not clear what his remarks meant. At least two officials issued subsequent statements insisting there has been no change in American policy that Hizballah is a terrorist group and the U.S. will not engage in talks with it. Secretary of State Hillary Clinton recently rebuked Syria for arms shipments to Hizballah that she said pushed the region toward war.

Regardless, Brennan's comments about Hizballah are "delusional," according to Michael Rubin of the American Enterprise Institute.

"There are moderates in Hizballah," Rubin said. "A 'moderate' in Hizballah is someone who makes car bombs out of smaller-size vehicles."

Brennan's comments suggest he is operating under the illusion that groups like Hizballah are analogous to Western political organizations, Rubin said. But the Shi'ite group's longstanding use of violence and threats to attain its political goals make it an unsuitable negotiating partner.

Brennan's suggestion that the United States talk to Hizballah "legitimizes achieving power through violence," Rubin told the IPT. "The streets of South Beirut are littered with the bodies of Shi'ites" who ran afoul of Hizballah.

"There are no moderates in Hizballah," said Farid Ghadry, former president of the Reform Party of Syria. "They are about dictating a terrorism agenda and promoting an Iranian effort to control the region. They want to kick the U.S. out."

Ghadry, a Muslim, has long been the face of anti-Muslim Brotherhood, pro-democracy forces in Syria. He spent much of his childhood in Lebanon, fleeing in 1975 when the civil war broke out. He has not been back to Lebanon since 1996, when Syrian security forces attempted to arrest him in retaliation for his efforts to replace the Ba'athist dictatorship (a close ally of Hizballah) with a popularly elected government.

Ghadry believes Brennan and the Obama Administration are "indirectly promoting the goals of Hizballah" based on "a lack of understanding of the region." He said Brennan is "stepping on a landmine" by pushing for dialogue with Hizballah.

When Washington attempts to engage with Hizballah, it undercuts the efforts of moderate Muslims and Christians in Lebanon, Ghadry said. He noted that in recent months, onetime opponents of Damascus and Hizballah like Druze leader Walid Jumblatt and Prime Minister Sa'ad Hariri have taken a very soft approach to Syria and Hizballah – which are working in tandem to subvert Lebanon.

The Brennan/Obama approach to Hizballah "demoralizes" moderates, who see the writing on the wall and decide they need to cut their own deals with the Shi'ite radical group, Ghadry told the IPT.

"The U.S. government sees this and says, 'Ah-ha, the moderates like Hariri and Jumblatt want to make deals with Syria and Hizballah, so we need to do it,'" Ghadry said. The result is a "vicious circle" of weakness. "It becomes a self-fulfilling prophecy," he added.

During recent Lebanese elections, Hizballah operatives burned automobiles and election headquarters of their opponents, "leaving no room for opposing candidates to run against the Khomeinist organization," said Dr. Walid Phares of the Foundation for Defense of Democracies.

"Stating that Hizballah is moving away from terror and violence because it has placed its members inside the Lebanese legislature would be the equivalent of stating that a Taliban militia was able to elect its members to an Afghan parliament in districts it controls with arms and money," Phares said. "This is the strangest proposition of the year."

Brennan's remarks "make Lebanese leaders, politicians and journalists laugh at the naivete of the U.S. administration," Phares told the IPT. "Worse and more dangerous, this will embolden Hizballah to continue with its strategies based on terror and intimidation." Brennan's Nixon Center remarks are just the latest questionable comment he has made since joining the Obama Administration last year.

In an August 6, 2009 speech, Brennan (picking up on a theme that started in the Bush Administration) stated that the Obama Administration rejects the word "jihad," preferring instead the term "violent extremism."

In a February 2010 speech at New York University, Brennan heaped praise on Islamic Society of North America (ISNA) President Ingrid Mattson, who introduced him. "As an academic whose research continues the rich tradition of Islamic scholarship, and as president of the Islamic Society of North America…you have been a voice for the tolerance and diversity that defines Islam," Brennan told Mattson. "We were proud to welcome you and many others to the White House for the [summer 2009] iftar dinner with the president."

ISNA is an unindicted co-conspirator in the Hamas-support prosecution of the Holy Land Foundation for Relief and Development, which ended with convictions on 108 counts. ISNA also traces its roots back to Muslim Brotherhood members in the United States. Its 2009 convention featured a panel with anti-Semitic and anti-gay rhetoric.

During the February speech, Brennan referred to Jerusalem as "Al Quds," its Arabic name, and again criticized use of the word jihad to describe jihadist terror. According to Brennan, "terrorists are not jihadists, for jihad is a holy struggle, an effort to purify for a holy purpose." He also said that, in the past, surveillance of U.S. Muslims under the Patriot Act has been "excessive" and that government policies "made many Muslims hesitant to fulfill their sacred obligation of zakat."