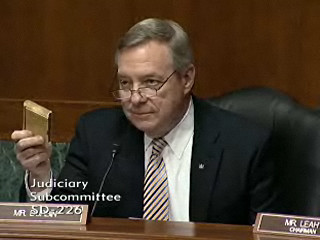 A "headwind of intolerance" against Muslims in America is leading to a disturbing spike in employment discrimination complaints and school bullying, a senior Justice Department official told a Senate panel Tuesday.

He called for the hearing, offering it as a counter-narrative to the House hearing organized by Rep. Peter King, R-N.Y., earlier this month that focused on radicalization within the American Muslim community.

He never mentioned King by name, but Durbin denounced what he saw as "inflammatory speech from prominent public figures [which] creates a fertile climate for discrimination."

As the Investigative Project on Terrorism reported Monday, Durbin has developed warm relationships with two groups - the Council on American-Islamic Relations (CAIR) and the Mosque Foundation of Bridgeview, Ill. - that federal law enforcement records show have clearly discernible Hamas-support histories.

Committee members Jon Kyl, R-Ariz., and Lindsay Graham, R-S.C., said bigotry of any ilk should be condemned and Graham paid tribute to the "thousands of American Muslims serving in our military." But Kyl expressed concern that the hearing was an attempt to discredit or silence those who focus on Islamist extremism.

"If it's part of a narrative that says it's improper to point out the obvious, that too many young Muslims being radicalized to join the jihad, then count me out," Kyl said.

Cardinal Theodore E. McCarrick, Archbishop Emeritus of Washington, said it wasn't an either/or proposition. He spoke about the need for unity in safeguarding the freedoms for people of all faiths, but also acknowledged the national security threat from "a particular form of extremist ideology that holds itself out as authentic Islam."

"These pervasive threats endanger all people both in this country and abroad," McCarrick said in his prepared testimony. "We cannot pretend that these threats do not exist. Our government has a duty to understand the threat and confront it effectively in order to keep our citizens safe and to promote and defend the common good of all."

Kyl questioned witness Farhana Khera, executive director of the legal group Muslim Advocates, about her criticism of law enforcement tactics in terror-related investigations. She has called the use of informants and sting operations "entrapment operations" which rope in people who otherwise might never get involved in violence and said they fuel "anti-Muslim sentiment."

Kyl asked whether Khera or Muslim Advocates has publicly condemned those who use violent or hateful rhetoric. "We are focusing on protecting constitutional values," Khera said.

She described running out of the Capitol on 9/11, when she was a Senate staffer, adding "I fully understand the threat we are facing" from terrorists. "Those who engage in criminal acts must be stopped and brought to justice

Kyl read several cases off the Investigative Project on Terrorism's list of 2010 homegrown terror cases, and asked Khera whether she stood by an alert on the Muslim Advocates' web page advising people "not to speak with law enforcement officials without the presence or advice of an attorney."

She did. Kyl called that "stunning" because cooperation from Muslim Americans is vital in thwarting potential terrorist plots.

Most of the hearing, however, was devoted to what the witnesses agreed was a rise in anti-Muslim sentiment. Khera called it "a growing menace to the safety and frankly to the social fabric of our nation."

As the IPT has reported, FBI hate crime data through 2009 has not shown a dramatic increase in anti-Muslim violence. That, Khera said in her prepared testimony, is due partly to a "deeply flawed" reporting system.

Perez repeatedly gave credit to the Bush administration for identifying potential civil rights violations in the wake of the 9/11 attacks. He referred to "blatant intentional discrimination" in the workplace, and cited numerous examples of Muslim schoolchildren being taunted as terrorists and told to "go home" by classmates. Talking to parents in different parts of the country, "I am struck by sense of fear that pervades their life," he said.

But existing laws are sufficient to handle the problem, Perez said, bypassing several invitations to suggest additions to hate crime and anti-discrimination laws. "We have an ample number of tools right now and we're using them in a robust fashion," he said.

Sen. Patrick Leahy, D-Vt. cited a growing argument that Islam is not a religion and does not warrant First Amendment protections. "This is nonsense" that ignores the Founding Fathers' motivation in creating the country, he said.

In addition to the job and school-based discrimination, the hearing touched on heated opposition to mosque construction proposals and legislation in many states which would ban Islamic law, or shariah.

Efforts to ban Shariah, Khera said, are "woefully misguided and they're chasing a threat that does not exist."