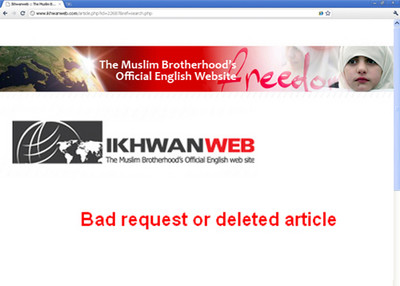 The Muslim Brotherhood seems to be trying to preserve its recently burnished image as a moderate party dedicated to maintaining a modern, secular, and just Egypt.

In keeping with this apparent internal strategy, the Brotherhood has removed its explicitly worded bylaws from its English-language website, the Investigative Project on Terrorism has learned (H/T to the Strategic Engagement Group). The bylaws are still available via an archived version of the webpage.

The bylaws have long been a source of discussion and debate on the Internet because of the group's stated intention to create an Islamic state, uniting Muslims around the world, while "building a new basis of human civilization." Selected sections read as follows:

"E – The need to work on establishing the Islamic State, which seeks to effectively implement the provisions of Islam and its teachings.

Defend the nation against the internal enemies, try to present the true teachings of Islam and communicate its ideas to the world.

G – The sincere support for a global cooperation in accordance with the provisions of the Islamic Sharia, which would safeguard the personal rights, freedom of speech for active and constructive participation towards building a new basis of human civilization as is ensured by the overall teachings of Islam."

The group's bold and unambiguous calls for re-establishing the Islamic Khalifa have startled many, and have fueled distrust as to its true intentions despite its current public face.

It's not clear why the bylaws disappeared, but the timing is highly suspicious. In January 2010, it was reported that the Brotherhood was considering amending them. No change appears to have been made in the last year. But now, with a genuine opportunity to appear on an Egyptian ballot, they have vanished from public view within days of President Hosni Mubarak's ouster.

On the group's Arabic-language site, however, the bylaws remain posted.

Press reports of the Brotherhood's role during the uprising paint a picture of a group committed to presenting its most appealing side for the world to see. While the organization is not a monolith, its old guard remains entrenched in power. And those voices still advocate the Islamification of society.

For example, in a sermon last September, General Guide Mohamed Badie said Muslims are duty-bound to make the Quran the law of Egypt.

"He is the bravest man in the Muslim world," Helbawy said, "and we (in Egypt) need innocent, honest and brave leaders like him."

In an episode of PBS' Frontline series that aired earlier this week, a young Brotherhood leader is seen advising an enthusiastic fellow Brother participating in the Egyptian protests to put away the Qur'an he was holding up, and to tone down his religious rhetoric:

"Don't hold up the Qur'an," the young Brotherhood leader said. "We should be holding up Egyptian flags. Open it…but not for the media."

When asked by the reporter if the leader wanted the Quran-holding brother out of the square, he replied, "we don't want him out. We want him don't [sic.] show the ideology on the press because it's so bad for this revolution."

This theme was echoed in a Jan. 31story appearing in the Los Angeles Times, where two Brotherhood members had the following exchange:

"'The fear is broken,' yelled Bahaa Mohammed. 'We want freedom.'

'Yes,' said Mohammed, hushing the young man. 'But first freedom and the will of the people.'"

It's not the first time Brotherhood members acknowledged the need to conceal the group's overall agenda with a more benign face. Speaking privately, but under FBI surveillance, activists in the American branch of the Muslim Brotherhood discussed the need to invoke deception in the wake of U.S.-brokered peace talks between Israelis and Palestinians in 1993.

The problem with the Oslo Accords was not in its details, members of the Brotherhood's Palestine Committee agreed during a weekend-long gathering in Philadelphia. Rather, the deal empowered the secular Fatah movement at the expense of the Islamist Hamas, a Brotherhood offshoot. And the deal led to the acceptance of the state of Israel, which the group opposed.

The problem, they agreed, was that they couldn't just come out and say it.

"I swear by your God that war is deception," then-Holy Land Foundation President Shukri Abu Baker tells Council on American-Islamic Relations co-founder Omar Ahmad. "War is deception. We are fighting our enemy with a kind heart and we never thought of deceiving it. War is deception. Deceive, camouflage, pretend that you're leaving while you're walking that way…Deceive your enemy."

Ahmad, in response to another speaker's question, says, "We've always demanded the 1948 territories" before there was an Israel.

"No," Ahmad agrees, "We didn't say that to the Americans."

Now, it seems, the Brotherhood sees its written bylaws as something they don't want to read by the English-speaking world. As the IPT has previously reported, the Brotherhood's public language muddies the waters as to what the group is truly about. This apparent strategy to appear moderate and secular is one that is held from the Brotherhood's senior leadership all the way down to their men on the street.

Fortunately, a review of the group's bylaws can give a glimpse into their true hopes and dreams. They're not hard to find on the Brotherhood's website, and available for the world to see.