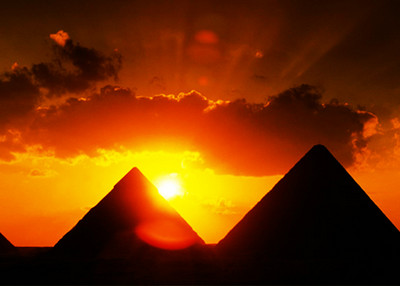 "Egypt is free!" chanted the hundreds of thousands of people gathered in Cairo's Tahrir Square.

A U.S. official, described by CNN as involved in Egypt discussions, called Mubarak's resignation "obviously a welcome step" that opens the door to "an unpredictable next chapter."

The future role of the Muslim Brotherhood remains uncertain. The Brotherhood, a fundamentalist Sunni movement, seeks to spread Islamic law throughout the world. Its members have indicated a desire to revoke Egypt's peace treaty with Israel and increase support for Hamas and other terrorist groups.

In a statement in Wisconsin Thursday, President Obama said this is "a moment of transformation" in Egypt and that the United States supports an "orderly and genuine transition to democracy" there. But earlier that morning, Director of National Intelligence James Clapper seemed to minimize the concern – and mischaracterize the Brotherhood -- by describing it as "a very heterogeneous group, largely secular, which has eschewed violence."

U.S. officials may be able to blunt some of the Brotherhood's influence in that transition by helping Egypt's secular opposition movements build competitive political organizations, writes Ayyan Hirsi Ali, a former Muslim who once belonged to the Brotherhood.

The U.S. was preparing an aid package for Egyptian opposition groups before Mubarak stepped down, Time magazine reports. It wasn't clear who would receive the money. "White House officials declined to say whether any of the new money would go directly or indirectly to the Muslim Brotherhood, Egypt's most prominent Islamic party," Time reports.

It's not clear how deep the group's support is among Egyptians. A poll commissioned by the Washington Institute for Near East Studies indicates tepid support for the Brotherhood and other radical Islamists within Egypt's population centers of Cairo and Alexandria.

Only 4 percent said they strongly approve of the group, while 11 percent approved somewhat. A third of the respondents, however, said they didn't know how they felt. As Hirsi Ali argues, the Brotherhood has the most sophisticated political infrastructure and messaging. Part of that message is an argument that opposing the Brotherhood would be "a rejection of Islam altogether."

"The Muslim Brotherhood will insist that a vote for them is a vote for Allah's law," she writes. "But the positions of power in government will not be filled by God and his angels. They will be filled by men so arrogant as to put themselves in the position of Allah. And as the Iranians of 2009 have learned to their cost, it is harder to vote such men out of office than to vote them in."

It has enjoyed significant electoral success as recently as 2005. In parliamentary elections that year, Brotherhood members running without party affiliation won 88 seats out of 444. Only 26 Brotherhood candidates survived the first round of balloting in November, and the group boycotted a subsequent round claiming the ballot was rigged.

Statements from Brotherhood officials about the future are cagey.

After issuing some conflicting statements in the early stages of the protests, Brotherhood officials have coalesced around the message that they are not seeking power and would not offer a candidate to succeed Mubarak.

That doesn't mean it won't seek to drive Egypt toward a more religion-driven society. In a column published by the New York Times Wednesday, Brotherhood official Essam El-Errian made it clear that, for all the flowery praise of liberty, their notion of democracy must involve theology.

"As our nation heads toward liberty, however, we disagree with the claims that the only options in Egypt are a purely secular, liberal democracy or an authoritarian theocracy," El-Errian wrote. "Secular liberal democracy of the American and European variety, with its firm rejection of religion in public life, is not the exclusive model for a legitimate democracy."

Religion is "an important part of our culture and heritage," he wrote, so any just Egyptian state "draws on universal measures of freedom and justice, which are central Islamic values. We embrace democracy not as a foreign concept that must be reconciled with tradition, but as a set of principles and objectives that are inherently compatible with and reinforce Islamic tenets."

Similarly, Brotherhood leader Kamal Helbawy told an Australian interviewer that religious law would come to Egypt "if the majority in the Parliament would like to see Islamists in power and agree on Islamic law and Sharia, the Muslim Brotherhood will be happy to implement that without any negative impact or effect on non-Muslims."

But the group's own bylaws are more absolute. Article 2 says the group "seeks to establish Allah's law in the land by achieving the spiritual goals of Islam and the true religion." That includes "the need to work on establishing the Islamic State, which seeks to effectively implement the provisions of Islam and its teachings."

Last September, Brotherhood General Guide Muhammad Badi called for the Quran to be the constitution of the state.

The Muslim Brotherhood has a long history of overplaying its political hand and leaving behind ill will, writes Jonathan Schanzer of the Foundation for the Defense of Democracies. In 1952, it supported the Free Officers Movement coup that brought down the Egyptian monarchy and gave rise to the current government. But from 1952 to 1954, it sought to spread its ideology in the Egyptian military. In 1954, when Gamal Abdel Nasser overthrew the President Mohammad Neguib's government, he purged the Brotherhood, hanging some of its members and sending others to jail.

When Anwar Sadat became president of Egypt following Nasser's death in 1970, he freed many of its members in exchange for the organization's renunciation of violence. But by the late 1970s, the Brotherhood concluded Sadat was insufficiently pious and the two sides had a falling out. Sadat began re-jailing its members and sending others to Afghanistan.

After nearly three weeks of laying low and proclaiming no interest in leading the next government, Mubarak's departure triggers a new phase in which political maneuvering will say more than anything.