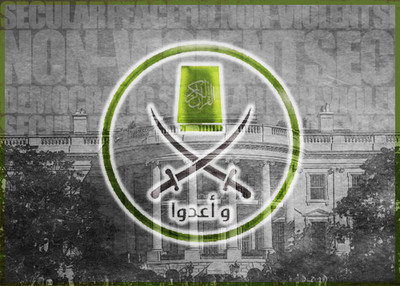 The White House this week issued a statement explaining why it does not view the Muslim Brotherhood as a terrorist group. It was in response to an online petition which attracted more than 213,000 signatures in support of designating the Egyptian-based group.

The statement emphasizes a lack of "credible evidence that the Muslim Brotherhood has renounced its decades-long commitment to non-violence."

The Brotherhood has another decades-long commitment, however, one that clearly endorses and supports terrorist attacks against Israel. That support began with Article Two of the Hamas charter, which clearly identifies it as "one of the wings of Muslim Brothers in Palestine." It continues today with statements inciting and supporting Hamas attacks.

As the war between Israel and Gaza raged in August, a statement on the Brotherhood's website translated by the Investigative Project on Terrorism praised "the valiant resistance factions [who] gave them [Palestinians] a lesson in heroism, faith, and courage. They decimated their soldiers and their officers..." Violent confrontation, the statement continued, "is the natural position which must be adopted with the heroes of Palestine, who have proven that the defeat of the Zionists as possible, which is closer when the will of the Umma [people] is united, with God's will."

President Obama publicly stood by Israel's "right to defend itself against what I consider to be inexcusable attacks from Hamas," including its indiscriminate rocket fire at Israeli civilian communities. The Brotherhood, by contrast, called for more attacks and "the defeat of the Zionists."

That was not enough for the administration to question its "decades-long commitment to non-violence." Other Brotherhood statements show that this is consistent rhetoric, even in more peaceful times.

A June message called "resistance to the occupier Zionist enemy" – a sterilized reference to terrorism – "a legitimate right and a sacred duty approved by all laws and customs and constitutions, and it is the only viable way to restore rights and reply to aggression."

An April 2010 statement, marking the 62nd anniversary of Israel's creation – what Palestinians call the Nakba, or catastrophe – said the only acceptable path is to continue trying to destroy an existing country.

"T]he Zionist destruction will only be by an Islamic, Arab plan which rejects peace begging initiative proposed since 2002; rejects normalization measures with the Zionist entity; reviews peace agreements and diplomatic relations with it; rejects foolish negotiations between Zionists and Palestinians which are like negotiations between the lamb and the wolf pack," the Brotherhood statement said.

The United States has a record of aggressively pursuing Hamas-support operations within the country. It shut down the Texas-based Holy Land Foundation for Relief and Development (HLF)'s assets in December 2001, labeling it a Specially Designated Global Terrorist. This action was based on the foundation's routing of millions of dollars to Hamas-controlled charities in the West Bank and Gaza. Later, the government prosecuted and a jury convicted the foundation and five former officials.

Internal records seized by the FBI and entered into evidence in that prosecution showed that HLF operated under the umbrella of a group called the Palestine Committee, which was created by the Muslim Brotherhood and tasked with supporting Hamas politically and financially.

Some might argue that was a long time ago. But a look at Brotherhood actions and rhetoric indicates it continues to be fully supportive of Hamas and its violent attacks against Israelis.

Reports earlier this week indicate that members of Jordan's Muslim Brotherhood branch were arrested for trying to smuggle weapons into the West Bank to facilitate terror attacks.

Yusuf al-Qaradawi, considered the Brotherhood's most influential cleric, urged Muslims to wage "the greatest battle of liberation" against Israel and the Jews in an online posting last month. Qaradawi, who also has a highly-rated program on Al-Jazeera, has an ever-expanding record of endorsing terrorist attacks and has prayed for the chance to "go to the land of Jihad and resistance" and "shoot Allah's enemies, the Jews," before he dies.

Interpol issued a bulletin Friday indicating that Qaradawi, 88, was wanted by Egyptian authorities for "incitement and assistance to commit intentional murder."

After Egyptian President Mohamed Morsi, a Brotherhood official, was forced from office in July 2013 in the wake of massive street protests against his rule, the Brotherhood's political party posted a memo on Facebook inciting followers to take out their frustrations by burning Coptic churches.

"The Pope of the Church (Coptic Pope Tawadros II) took part in the ouster of the first elected Islamist president. The Pope of the Church charges Islamic Sharia with underdevelopment [and] stagnation," the memo from the Freedom and Justice Party's branch in Egypt's Helwan Governorate, near Cairo, said.

"And for the Church to adopt a war against Islam and Muslims is the worst crime. For every action is a reaction."

Before Morsi's ouster, the White House welcomed a delegation of Muslim Brotherhood officials, even helping clear their path to avoid standard airport inspections as they landed in the United States.

State Department officials had numerous contacts with Brotherhood officials in the years leading up to Egypt's Arab Spring revolution.

Director of National Intelligence James Clapper similarly described the Muslim Brotherhood in February 2011 as "largely secular" and said that it "eschewed violence." Four months later, Secretary of State Hillary Rodham Clinton said the U.S. planned to expand dialogue with the Brotherhood as part of a commitment "to engage with all parties that are peaceful and committed to nonviolence."

Last month, after two Palestinian terrorists killed four rabbis in a vicious and bloody attack in Jerusalem, Secretary of State John Kerry blamed the killings on Palestinian calls for "days of rage" and said Palestinian leaders must take serious steps to refrain from such incitement. Those calls stemmed from an incitement campaign among Palestinians which erroneously claimed Israel was about to impose sovereignty over the Temple Mount, which includes the Al-Aqsa Mosque.

But the Brotherhood has pushed the same message – that the mosque is under "attack" and must be defended.

"We emphasize that the Cause of Al-Aqsa and Jerusalem is the cause of causes which achieves unity of word, and rejection of division, and that the liberation of Jerusalem and Al-Aqsa is the major goal for all free men after the liberation of wills and homelands, and a bloody fascist coup the Zionists arranged, the West supports, Zionized Arabs financed, and the media of corrupt businessmen promotes, will not divert us from that," a May message from the Brotherhood said. "We are certain that it is a coup ripe for collapse and a fall soon at the hands of free revolutionaries, God willing."

Generously doling out benefits of the doubt to the Muslim Brotherhood is hardly new to the Obama administration. But it makes little sense to properly designate Hamas as a terrorist group whose actions claim American lives and threaten national security while, at the same time, treating its parent organization and chief enabler as a group committed to non-violence and worthy of international recognition. Is this a case of the government seeing what it wants to see, rather than what exists?

The lies continue, endlessly. ALL so-called western "leaders" are as guilty as Obama but none is so egregious.

After His Majesty's Presidency

I predict that Barack Hussein Obama will convert to Islam.

Muslims believe that the Koran is the perfect word of their god, Allah. The word of Allah cannot be wrong. It cannot be altered. It cannot be added to or subtracted from and no part of it can be denied.

Being the word of Allah, the Koran is Islam's primary founding document. The word of their god has precedence over everything else. There is no higher source for what Islam requires of Muslims.

Those claims by the moderates are refuted by nothing less than the Koran itself. The perfect word of their god shows that Islam is not a religion of peace, that Muslim terrorists are not following a distorted version of the religion and that there is an abundance of justification in Islam for terrorist acts.

Those "extremists" are, in fact, genuine Muslims following the letter and spirit of the Koran, Allah's perfect word. They are doing what Islam tells them to do. The horrors perpetrated by certain Muslim groups are extreme by civilised standards but those horrors are justified by Islam when dealing with enemies of Islam. Muslims are told by the god of Islam to hate and kill. Extremism isn't the problem. Islam is the problem.

The moderates give Islam a way into civilised countries by misrepresenting it and are a far greater threat to civilisation than the terrorists. They are knowingly aided and abetted by western politicians, the media, royalty and other traitors who call Islam a religion of peace, who say that there is nothing in Islam to justify the acts of terrorists, who won't tell their people what Islam's instructions to Muslims really are and who won't take a stand to protect their people against the ever-growing problems caused by Islam.

But don't take anyone's word for it.

Know your enemy. Read the Koran.

All the more reason for Israel to stay strong. If Israel,( G-d forbid), should weaken, then

the Muslim Brotherhood would come in strong against America...then God help us!

Is this a case of the government seeing what it wants to see, rather than what exists?

The answer to this question is unequivocally NO! With experts and advisors being paid millions of dollars in consultancy fees and a political class drawn primarily from the Legal Profession, Foreign Policy is no accident or dumb stumbling around. Obama's disdain for Israel, for Zionism and for Jews is palpable even to us far flung Jews living in the Antipodes. His staggeringly rude rejection of Netanyahu at a time when the Israeli PM commands overwhelming support for his approach,is exactly what it looks like.......Obama is enraged that Netanyahu won't bow and scrape to please the United States. Obama expects the PM to listen when the President speaks and to do his bidding without question. For this Israeli PM to say he will look after Israeli citizens first, is reminiscent of the temerity of Oliver Twist and his "Please Si,r can I have some more" moment..........how dare this rogue politician not agree to deals that would see the State's demise in a couple of decades. Muslim Brotherhood non-violent...........yep, and Al Bana & Al Husseini werne't Nazis..............not even Barak Obama can obliterate history!