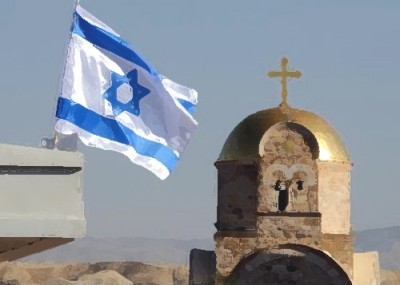 One of the most enduring anti-Israel slanders is the charge that it is persecuting non-Jews and destroying Muslim and Christian holy sites. These dubious claims continue to be made not only by international organizations, but by U.S. groups like American Muslims for Palestine (AMP) and the Council on American-Islamic Relations (CAIR).

Coming at a time when Christians are under direct attack from Muslims in Egypt, Nigeria and in other Muslim states, promulgating such fantasies serves only to incite hatred and violence against Jews.

Palestinian Muslims and Christians "are living basically in an outdoor prison, in refugee camps," CAIR-Michigan Executive Director Dawud Walid said in a May speech to the Islamic Organization of North America. "Al-Masjid al-Aqsa is our property for us to defend. This is the land that Allah guided us to … and it should be free" (i.e., not under Israeli jurisdiction).

In 2010, Israel added two of the most holy sites in Judaism – the Cave of Machpelah in Hebron and Rachel's Tomb near Bethlehem – to its historic registry list, drawing an angry reaction from AMP Chairman Hatem Bazian, who said the designation "proves Israel does not want peace." Bazian claimed that the move is "just the latest in a series of actions aimed at separating Palestinians from their land."

Both Hamas and the more "moderate" Palestinian Fatah organization have accused Israel of a laundry list of crimes against non-Jews, ranging from drinking Muslim blood to attempting to steal Jerusalem's "Islamic-Christian religious history."

Perhaps no falsehood has been recycled more often than the claim that Israel seeks to destroy the al-Aqsa Mosque.

On Aug. 21, 1969, a deranged Australian Christian named Michael Dennis Rohan set fire to the mosque. Although Israeli firefighters quickly extinguished the blaze and Rohan confessed to setting it, Islamists and others have spent more than four decades propagating the falsehood that Jews and Israelis were behind the attack.

Middle East scholar Daniel Pipes writes that many Muslims around the world became convinced that Israel had paid Rohan (some claimed his actual name was Cohen) up to $100 million to torch the mosque.

As Palestinian Media Watch has documented, the al-Aqsa slander has become a staple of Palestinian Authority propaganda, with its media organs claiming that Jews seek to invade al Aqsa, and that Israel plans to destroy the mosque and build the Jewish Temple in its place. PA President Mahmoud Abbas has declared that Israel seeks to destroy that shrine.

"Israel's policies and schemes have never stopped and will never stop in al-Aqsa courtyards in order to harm [the mosque's] Arabness and holiness," PA television told viewers August 3. "What is new this time is the discovery of traces of dangerous chemicals in the al-Aqsa foundations and [the discovery of] other solvents used to cause the foundations to crumble and collapse." That same day, the official PA daily al-Hayat al-Jadida claimed the Israeli chemical plot was part of "a dramatic offensive to Judaize the city and utterly erase its original [Arab] landmarks."

In June, Muslim Brotherhood General Guide Mohamed Badie exhorted Muslims to make their "sole goal" the "recovery of al-Aqsa Mosque, freeing it from the filth of the Zionists, and imposing Muslim rule throughout beloved Palestine."

Badie added that "The Lord of Glory has threatened these murdering Zionists criminals with a penalty of a kind which operates in this world before the Hereafter."

The website of Imam Yusuf al-Qaradawi, an influential Muslim Brotherhood cleric based in Qatar, recently featured a statement from the International Union of Muslim Scholars accusing "armed Zionists" of committing "aggression" against Muslim worshippers at al-Aqsa and declaring Jerusalem "the holy city for Muslims and Christians." The same statement denounced Israel for insisting that Arab peace negotiators recognize it as a Jewish state.

Hizballah boss Hassan Nasrallah has accused Israel of attempting to destroy al-Aqsa Mosque. The Iranian regime's Fars News Agency published a story quoting without rebuttal a "Palestinian activist" warning that Israel may order the mosque's destruction "through an artificial (earth) quake." After Israeli security forces clashed with Palestinian rioters at the mosque compound in October 2009, Hamas political leader Khaled Meshaal claimed the incident was "the first step towards dividing the mosque, and demolishing it and building a temple in its place.

"Jerusalem belongs to its Arab inhabitants, Muslims and Christians. The future (of the city) will not be settled at the negotiating table, but on the ground of confrontation and resistance," Meshaal added.

In late June, the Church of the Nativity in Bethlehem was added to the World Heritage List of endangered sites maintained by the United Nations Educational, Scientific and Cultural Organization (UNESCO) over the objections of Washington and Jerusalem. "Palestine" (Abbas' PA regime, which was admitted to UNESCO last year) pushed for a resolution blaming Israel for endangering the church even though UNESCO's own investigators questioned the endangerment finding.

But in late June, the agency's World Heritage Committee voted 13-6 to disregard their conclusions and declare the church to be endangered. "We are ecstatic," Palestinian official Hanan Ashrawi said after the vote.

She added that the endangerment finding "emphasizes that Israel must be bound by international law and treaties, particularly pertaining to its illegal and detrimental measures as a belligerent occupant and as a major threat to the safety and the responsible preservation of that important segment of human civilization in Palestine."

Most mainstream media outlets said little about the fact that it has been Palestinian terrorists rather than Israelis who have been menacing Christians and turning the Church of the Nativity into a war zone. In 2002, more than 50 Palestinian gunmen in Bethlehem, desperately seeking to avoid capture by Israeli troops, seized 200 hostages and imprisoned them inside the church complex.

The terrorists, members of Hamas and then Fatah boss Yasser Arafat's organization, included bomb-makers, recruiters, financiers, and arms traffickers who had been involved in suicide bombings in Israel. During the Church of the Nativity siege, the terrorists denied medical care to sick priests, and food and water to other hostages, and stole religious artifacts.

"Using priests and nuns as human shields in the most sacred location for Christianity is not just barbaric," the Heritage Foundation's Ariel Cohen observed. "It is a violation of the 1977 First Protocol to the Geneva Convention and it is a war crime."

But prominent news outlets including the Christian Science Monitor ,the New York Times and the Associated Press glossed over or ignored this dark history in reporting the UNESCO designation.

Earlier this year, "60 Minutes" broadcast a story by correspondent Bob Simon purporting to show that Israel's occupation of the West Bank and Jerusalem was largely to blame for the decline of Christian communities there. The Committee for Accuracy in Middle East Reporting in America (CAMERA) published a detailed critique of the "60 Minutes" piece noting that Simon ignored a long pattern of Islamist harassment and mistreatment of West Bank Christians. It published an ad in the Wall Street Journal August 14 demanding CBS correct the report.

Among the errors was a "60 Minutes" claim that the percentage of Muslims in the West Bank has decreased since 1967. That is due to a faster growth of Muslims. Citing data from the Jewish Council for Public Affairs, CAMERA reported that the raw number of Christians in fact has grown from 40,000 just before the Six Day War to about 52,000 today.

CAMERA pointed to a 2009 op-ed by Israeli Arab journalist Khaled Abu Toameh, in which he described how Christians have been suffering as Islamist groups like Hamas strengthened in the Bethlehem area. Toameh described an atmosphere of violence and intimidation in which Christian-owned companies were forced out of business as a result of shakedowns by Muslim gangs, and how Muslims stole land from Christian property owners.

"As a Muslim journalist, I am always disgusted and ashamed when I hear from Christians living in the West Bank and Jerusalem about the challenges, threats and assaults that many of them have long been facing," Toameh wrote. "When they go on the record, these leaders always insist that Israel and the occupation are the only reason behind the plight of their constituents. They stubbornly refuse to admit that many Christians are being targeted by Muslims. By not talking openly about the problem, the Christian leaders are encouraging the perpetrators to continue their harassment and assaults against Christian families."

For all the talk of conspiracies against non-Jews, the truth is that since Israel assumed control over the entire city of Jerusalem in 1967, no evidence has emerged of a Zionist plot against non-Jews.

Islamists have failed to demonstrate the same respect for Muslims and non-Muslims. Militants in Nigeria are attacking Christian churches in a campaign of violence. Coptic churches in Egypt likewise have been targeted and some jihadists are threatening wholesale slaughter. Sectarian violence in Iraq has spawned attacks on mosques and churches.

The reality is that Israel is the only country in the Middle East where the Christian population is growing (aside from foreign workers in Saudi Arabia and other Gulf countries who forced to practice their faith in secret). By focusing attention on false allegations of Israeli persecution, Islamists can delegitimize the Jewish state and divert attention from the serious problem of Muslim persecution of Christians.

The same American Islamist groups who attack Israel largely ignore the persecution of Christians in Hamas-ruled Gaza or the Fatah-controlled West Bank. The double standard shows they are less interested in advancing human rights than they are in demonizing Israel.