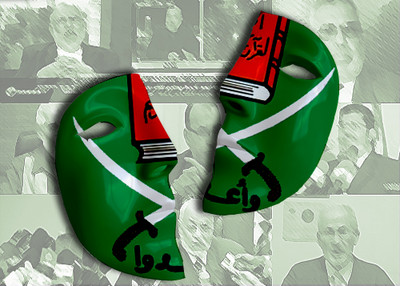 It's no wonder world leaders don't know what to make of the Muslim Brotherhood. The group's leaders can't even reach consensus amongst themselves.

Amidst the chaos of what is being dubbed the Papyrus Revolution, the leaders of Egypt's primary opposition party are taking to the airwaves worldwide in droves. From the United States to the United Kingdom, and Russia to Japan, senior Brotherhood members are being questioned about how they would manage the Egyptian state should they accede to power in the aftermath of President Mubarak and the ruling National Democratic Party. Of primary concern to many is the Brotherhood's stance on women's rights, the implementation of Islamic law, policies toward Egypt's sizeable Coptic Christian minority, and its projected plan for relations (or a lack thereof) with its neighbor, Israel.

On that last issue, the Brothers just can't seem to project a unified message.

On Monday, shock headlines made their way around the web that, when in power, the Brotherhood planned to scrap Egypt's more than 30-year peace treaty with Israel. The Egyptian people "should be prepared for war against Israel," senior London-based MB leader Muhammad Ghanem said to Iran's Arabic-language news station, Al-Alam.

Backing Ghanem's stance, Brotherhood deputy leader Rashad al-Bayoumi later told Japan's NHK TV that a new provisional government—likely to include a Brotherhood presence regardless of recent claims that the group has no interest in a leadership role in a post-Mubarak government—should "dissolve the peace treaty with Israel." Unlike Ghanem, who is a part of the group's mysterious international organization, Bayoumi is a central leader of the movement's domestic presence in Egypt.

However, the group's public stance on Israel and the longstanding peace treaty does not appear to be based upon geographic location. Speaking on a BBC panel about the recent events in Egypt and the prospects for the future, former spokesman for the Muslim Brotherhood in the West, Kamal Helbawy told host Andrew Neil pointedly that, if in a position of power, the Brotherhood would uphold Egypt's treaty with Israel:

NEIL: Would you adhere—if you party came to power in free and fair elections—would you adhere to the 1979 peace treaties with Israel.

HELBAWY: We will. But I'll tell you something…

NEIL: But that's not what your party says. Are you representing the Muslim Brotherhood this morning?

HELBAWY: I am not speaking in their name, but I am a senior member now…

NEIL: of the party?

NEIL: Well it is clear, the documents—every document coming out from the Muslim Brotherhood— says to rip up the 1979 [UI] treaty.

HELBAWY: Which ones? You asked me one question but you didn't give me one minute to answer.

NEIL: Ok, so answer it because…

When pressed further about his stance's apparent conflict with Ghanem, Helbawy struck back, that the comments did not sound like those of a Muslim Brother:

NEIL: Do you here agree with a prominent member of the Muslim Brotherhood, Muhammad Ghanem, who, in an interview with Iranian news outlets, said the Egyptian people should prepare for war against Israel, the Suez Canal should be closed immediately, and the flow of gas to Israel should be cut off…

HELBAWY: This is Ghanem? This is Nasser-y speak. It's Nasser is speaking again.

NEIL: Do you agree with that?

NEIL: Are you aware of the widespread suspicion—sometimes not with all gullible Western journalists—but a widespread suspicion among a lot of people in the West that the Muslim Brotherhood puts up people like you to sound and look moderate and to cover the fact that you're a highly extremist and Islamist organization.

HELBAWY: That is your accusation, that is your suspicion, but it is not reality.

Not representing the Muslim Brotherhood? It seems Helbawy's tune has changed. Now banned from entering the United States, Helbawy spoke in Oklahoma City at the 1992 joint conference of the Muslim Arab Youth Association (MAYA) and the Islamic Association for Palestine (IAP)—a now-defunct Hamas propaganda arm in the United States—about how Jews and Christians are the enemies of Muslims and how the now-designated terrorist group, Hamas, was holding the mantle for Muslims in "an absolute clash of civilization" against the them. Hamas, founded in 1987 as a splinter from the Muslim Brotherhood, has long been committed to violent jihad against Israel, and has, from the outset, denied the state's very existence.

Ghanem's comments do, in fact, fit perfectly in line with the Brotherhood's traditional policy line. While the Brotherhood's official releases have shied away from directly tackling the issue of relations with Israel, former and current leaders have been more forthright in their pronouncements. As noted in a 2007 article on the group, then-Muslim Brotherhood Supreme Guide, Mohammed Mahdi Akef, said that the "'Brotherhood has not recognized Camp David from the very first day it was signed,' explaining not only that the group rejects all agreements with Israel but that Arabs and Muslims should 'resist the enemy [Israel] with armed jihad.'" This theme of "resistance"—aka armed violence—against the "Zionist occupier" and their "Anglo-American" supporters has been a common one coming from the Brotherhood over the years, and was explained at great length in a draft of the group's 2007 party platform.

That year, Akef slapped down another leading Muslim Brotherhood official who had been quoted saying the group "would recognize Israel and accept the treaties" if it ever came to power. Essam El-Erian was quoted in the Arabic newspaper Al-Hayat saying "we will not declare war on Israel" and that the Brotherhood would seek to revise the Camp David treaty, not renounce it.

Days later, Akef made it clear El-Erian was off base. "The Brotherhood," he said, "does not and will never recognize Israel … Israel does not exist in the Brotherhood's dictionary." El-Erian claimed he was misquoted.

Also outlined in the 2007 platform—a so-called blueprint for Egypt under Brotherhood-rule—was a general Islamization of Egyptian society, with a determination made that women and Copts could not rise to become Egypt's head of state. When asked on the BBC about these troubling conclusions, Helbawy went on the defensive, declaring the document null and void:

NEIL: But your program—the most comprehensive one published 4 years ago, specifically excludes a woman as head of state.

HELBAWY: It is not a program, it was not published, it was a draft…

NEIL: But it did exclude her, didn't it?

HELBAWY: No, no. it excluded completely at the time, but this was a draft and a proposal, and now it is off.

NEIL: You say that's not Muslim Brotherhood policy because I…

HELBAWY: Not to seclude women and Copts. It was a proposal—they sent it to many thinkers and writers. And the feedback came—we did many seminars, one of them in Westminster here, and we declared completely that this is nonsense.

NEIL: Alright, well I have not seen this…

HELBAWY: …and that this is out of Islam.

Helbawy is not alone in his flip-flopping. In an interview with CBS News Tuesday, Brotherhood spokesman and former Secretary-General Mahmoud Ezzat claimed his group wants "peace with all the world." As part of this, "we will respect the peace treaty with Israel as long as Israel shows real progress on improving the lot of the Palestinians."

Ezzat struck a very different tone in 2007 when interviewed by the Brotherhood's English-language website, IkhwanWeb:

"As for international treaties, specially [sic.] Camp David, the Muslim Brotherhood's attitude towards the treaty hasn't changed, and that Palestine is not owned by the Palestinian people alone, but it is owned by all the Arab and Muslim World. No one is allowed to concede even single span from it. As for all treaties, we respect them, and Camp David can, like other treaties, be amendment or even cancelled according to the international law."

And Thursday, Mohamed Morsi, the Brotherhood's media spokesman, told CNN that his group was "not against the Jews…[but] against Zionism…[and] torturing the Palestinian people." Morsi also told the cable news channel that the Brotherhood rejects "violence against anyone." Try telling that to Helbawy circa-1992 and a host of other Brotherhood leaders over the years who have spoken of a war between Muslims and Jews, of severing ties between Israel and Egypt as soon as possible, and of armed jihad.

The numerous and conflicting statements make the Brotherhood's true position somewhat of a mystery.

As Barry Rubin notes, senior Brotherhood members seem to finally be coordinating on a unified public message that "avoid[s] extremist statements as [the Brotherhood] tries to sell itself to the Western audience and (insert adjective) media as moderate and cuddly." For this reason, many Brotherhood leaders in interviews with the West are now changing their tone to say they support all treaties that uphold "justice.". As Rubin concludes, because the Brotherhood considers Israel's existence to be an "occupation" of Muslim lands, Israel cannot, in and of itself, be just. Thus, "paradoxically…the only way Israel could have a peace treaty with Egypt is not to exist at all."

With this in mind, Americans should be wary about taking the Muslim Brotherhood at its word with regard to Israel—or anything else for that matter. And while any group has its uncontrollable elements who don't like to toe the party line, it seems many of the Muslim Brothers have now gotten the memo to proceed with caution and to tout a line that Americans are more comfortable with—"justice."

One former radical-turned-moderate author and current Council on Foreign Relations (CFR) Senior Fellow, is reassured by the change in tone, signaling a transformation from a group whose motto included "death in the service of God is the loftiest of our wishes" to one that is simply seeking "justice." At a CFR panel on February 2nd entitled "Ramifications Of Egypt's Political Upheaval," Ed Husain told a U.S. audience:

"[We should]…believe the Muslim Brotherhood when it says it wants to uphold the peace agreement – that's something that Kamal Helbawy said last weekend, but they want to ensure that it's just. That's a huge advance from where they were five years ago, saying they don't recognize Israel or the peace agreement."

Clearly it's not easy to tell U.S. officials which side of the Brotherhood mouth to listen to.

But Ian Johnson, author of A Mosque in Munich, in an interview with IPT News warns that we should not be fooled by the Brotherhood's new public persona, and should choose our partners in that region carefully.

"In foreign policy, governments should never rule out dealing with anyone if it advances our national interests, but we need to do so cautiously and with a long-term view, not just asking ourselves, how can we get rid of Mubarak ASAP and come out looking like the good guys?" Johnson said. "We need a more strategic view of who we really want as partners in the Mideast. Mubarak and that generation of strongmen was the wrong choice, but that doesn't make their enemies the right choice."