Continuing on the path of Qutb: Dr Mohamed Badei, the new Supreme Guide of the Muslim Brotherhood? 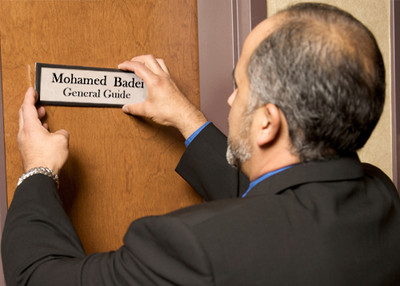 Just when it looked like the war between the so-called "conservatives" and the "reformists" over the next phase of the Muslim Brotherhood was coming to a close, it heats up again.

The Brotherhood was scheduled to announce the successor to Supreme Guide Mohamed Mahdi Akef, but that has been postponed until the weekend. The Cairo-based English-language weekly Al-Ahram explains:

"Three members of the group's conservative wing -- Mohamed Badei, Rashad El-Bayoumi and Gomaa Amin -- competed for the post. Sources say Badei is most likely to become the next supreme guide, having won 66 out of total 100 possible votes on the group's Shura Council. His seemingly clear cut victory has been undermined by the support El-Bayoumi, 75, secured from the group's international affiliates."

According to the independent Egyptian daily Al Sharouk:

"Objections raised by what is called the "Global Shura Council" to choosing Mohamed Badei as the 8th Supreme Guide (and the de facto Supreme Guide for Muslim Brotherhood Movement worldwide), forced the Movement to reschedule the press conference to announce the name of the new Guide to take place on Sunday instead of yesterday.

According to well-informed sources, Mohamed Mahdi Akef is trying to convince the members of 'Global Shura Council,' gathering in Beirut now, to accept the nomination of Badei for the sake of protecting the reputation of the Muslim Brotherhood and its cohesion."

This leaves the Brotherhood in a potentially tricky spot. Akef technically is no longer the Supreme Guide. Mohamed Habib, a reformist and the former first deputy, has resigned and Kharait al Shater, the second deputy, is in jail due to one of the Egyptian government's frequent crackdowns on the Brotherhood.

As we previously reported, reformists were routed a few weeks ago when the Brotherhood announced the new members of its guidance bureau – the group's main governing body. Through questionable gaming of the election process by outgoing Supreme Guide Mohamed Mahdi Akef, Mahmoud Ezzat and hardliner allies ensured the reformists were virtually squeezed out of the movement's leadership. Hence, Habib resigned, calling it "selection rather than election." One reformist Brotherhood member has been protesting the results on his blog. He states:

"I can't accept Sayed Qutb's ideology in Muslim Brotherhood, and it's clear that the new office will adopt the Qutbic Ideology, most of the office members were arrested with Sayyed Qutb in 1965."

Qutb was a highly influential Brotherhood intellectual executed by the Egyptian regime in 1966. His two most prominent works, Milestones and In the Shade of the Quran, inspired a new generation of jihadists, including Osama bin Laden, who was taught by Qutb's brother Mohamed at a university in Saudi Arabia. Qutb saw the Muslim world as having descended into jahilliyya, or pre-Islamic ignorance. Qutb called on Muslims to wage jihad to "liberate" the entire world from the servitude of man-made laws, which would be replaced by Shariah.

If Akef is successful in his lobbying efforts and Mohamed Badei becomes Supreme Guide, the next phase of the Brotherhood's history will likely be defined by Qutb's ideas and deepening fundamentalism. Badei has held prominent positions in the past on the guidance bureau and in two Brotherhood-dominated professional associations. Some have tried to paint Badei as a consensus candidate who is widely liked in the movement. However, he makes it clear where his influences lie. An article posted on the Brotherhood's English-language website notes that Badei "has been said to follow the conservative ideals of the late Sayed Qutb" whom he defends as a reformer rather than a hardliner. Badei is seen as "one of the most loyal leaders to the organization of Sayyid Qutb," according to the London-based pan-Arab daily Al-Hayah.

In an interview last November with Al Youm Al Sabi'e, Badei was stalwart in his opposition to the idea of a woman or a Copt assuming the presidency of Egypt, basing his decisions strictly and solely on Islamic law. When asked about a woman becoming president, he replies, "[O]ur Fiqh [jurisprudence] choice is that women are not suited to lead the state." On Copts, Badei cites "a Prophetic Hadith which forbids a man from outside the faith from assuming the leadership of the state." When asked if such logic results in a religious state, Badei explains:

"We are a Muslim state, not a religious one. The leader undertakes a religious burden alongside his leadership like the Messenger (may God bless him and grant him peace) did in the first Muslim state, being the leader of the state and the executer of legal rules; and he led the army."

The interviewer then asks if the people have the right to choose what they want. Badei's answer is chilling to those of us who believe in freedoms of speech, religion, association and other central tenets of democracy: "If the people choose something against the Sharia, it is not proper to implement it. If there is a conflict with the Sharia, it must not be put into force."

But what else can we expect from someone who was imprisoned with Sayyid Qutb? According to Al-Hayah:

"The new general guide was sentenced in a number of cases, the most famous of which was a 15-year imprisonment in 1965 in the military case that included among the sentenced the fundamentalist leader Sayyid Qutb; [Badei] spent 9 years in prison on the basis of that sentence…"

The now-overwhelming influence of hardliners among the leadership of the Muslim Brotherhood will ensure the movement will remain – at its core – strictly committed to establishing an Islamic state with Shariah as the law of the land. Past advocates for the Brotherhood who view it as a "moderate" organization that can serve as a bridge between the West and the Muslim world and a counterbalance to al Qaeda may want to rethink their views.