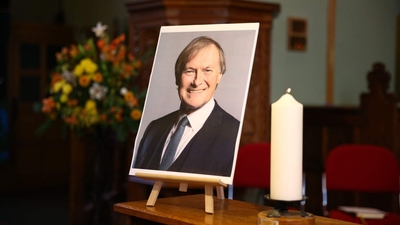 A new counter-terrorism law went into effect in the United Kingdom in July with hopes that it would prevent future terror attacks. The new law, said UK Justice Secretary Dominic Raab, "would send a message to those who kill and maim in the name of warped and fanatical ideologies."

The message to potential terrorists, Home Secretary Priti Patel said, was that "we will do everything possible to stop them."

Unfortunately, it did not deter Ali Harbi Ali. Ali, 25, stands accused in the brutal murder of Sir David Amess, a member of the UK Parliament.

Amess was attacked Oct. 15 while attending a meeting with his constituents in a Methodist church in Leigh-on-Sea. Witnesses say Ali pulled out a knife and lunged at Amess, stabbing him numerous times.

Amess died at the scene.

Authorities are treating the murder as an Islamist terror attack. Ali is being detained under the Counter-Terrorism and Sentencing Act of 2021. It was an amendment to the Terrorism Prevention and Investigation Measures Act of 2011 and came about following a series of Islamic terror attacks in the UK. The first occurred in November 2019. Usman Khan, a convicted Islamic terrorist who had been released from prison early, killed two people and wounded several others in a knife attack near the Fishmonger's Hall. Khan was shot and killed by responding Metropolitan police officers.

The second attack occurred three months later in the Streatham section of South London when Sudesh Amman stabbed two people. Amman would have attacked more had not the responding officers, who were surveilling him, shot and killed him. Amman, like Kahn, had previously been convicted of a terrorist act and was granted early release from prison. Both Khan and Amman had attended deradicalization programs and feigned rehabilitation.

Amess' apparent killer also was "known to authorities." As a teenager in 2014, Ali was directed to a deradicalization program known as Prevent. Instituted in the UK in 2011, the program aims to "prevent people from being drawn into terrorism and ensure that they are given appropriate advice and support."

However, the Prevent program is a voluntary program and does not include British security services. In addition, a referral does not place the person on a watch list.

Peter Fahy, the former chief constable of Manchester Police, was the national lead for the Prevent program. He felt that involving security services in the process would discourage families or institutions, such as schools or religious organizations, from making referrals to the program.

Ali was offered one-on-one counseling. Initial reports stated that he left the program before completing it, but a source familiar with his case said "he went through the process and was discharged." Either way, the Prevent program seems to have failed in Ali's case.

Attempting to de-radicalize potential terrorists may be a noble ideal. But it is flawed with uncertainty and poses genuine security risks. While no program can be 100 percent effective, the risk of failure could be reduced by involving law enforcement and intelligence services in the process.

"There is no blueprint or silver bullet for diverting or undoing radicalisation," said Liam Duffy, a strategic adviser for the counter extremism project. "You can't just put someone in one end of such a programme and expect them to come out the other end a democratic, law-abiding citizen."

This is particularly true when it comes to prison radicalization and failed rehabilitation programs. Often what comes out is much worse than what went in.

Ali is a British citizen who was born in the UK after his parents had fled Somalia during the 1990s civil war. His father, Harbi Alu Kullane, was an adviser to the Somali prime minister. Some are referring to Ali as a lone wolf terrorist who was somehow self-radicalized without anyone in his family or his community being aware of it.

Noted author and Stanford University Research Fellow Ayaan Hirsi Ali, a fellow Somali, disagrees. She points out that Somali communities are very social, a place "where solitude is not an option." Hirsi Ali believes that any "key signs of radicalization" would have been immediately detected by Ali Harbi Ali's family members.

The concept of self-radicalization is a myth, as I stated almost 10 years ago: "A terrorist is not hatched overnight, nor are they produced solely in the dark vacuum of self."

According to court documents, Ali Harbi Ali has aligned himself with ISIS.

Faced with the reality of Islamic radicalization, and the difficulty in rehabilitating those who succumb to it, authorities may need to amend present strategies and goals.

The question of what should be the primary goal of any counter terrorism law was best answered by UK's Justice Secretary Robert Buckland when he said, "Protecting the public is Government's first duty."

According to the new law, Ali could face a mandatory life sentence in prison if convicted. Other provisions in the 2021 Counter-Terrorism and Sentencing Act abolish early release for convicted terrorists, and add more stringent supervised release conditions – including mandatory polygraph testing and the establishment of a registry for released terrorists. Much like a sex offender registration program, the released terrorist would have to notify local law enforcement agencies of any change of address, employment status, or travel. Any failure to do so would be cause to return the released terrorist to prison.

These are all well needed changes to a flawed counter terrorism program that may have placed too much emphasis on preventing radicalization and not enough on protecting the public.

Committed jihadists are not deterred by penalty of law.

Tragically in the case of Sir David Amess, this has proven true.