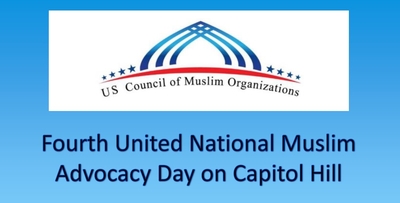 Terrorist apologists and their allies wrapped themselves in civil rights rhetoric on Capitol Hill last week for the 4th Annual National Muslim Advocacy Day, sponsored by the US Council of Muslim Organizations (USCMO).

The USCMO acts as an umbrella organization, coordinating activities of major Islamist organizations including the Council on American Islamic Relations (CAIR), Muslim American Society (MAS) and the Islamic Circle of North America (ICNA), among others.

CAIR and MAS have direct connections to the Muslim Brotherhood, which seeks to incorporate religious law into secular society. ICNA has a historical connection with Jamaat-e-Islami, the oldest Islamist group in South Asia, which aims to create an Islamic society and state.

Egyptian Americans for Freedom and Justice (EAFJ), a more openly Muslim Brotherhood support group, piggy-backed on the USCMO event to engage in its own lobbying effort. To read more about that, click here.

"Too many members of Congress​ insist on closing their eyes when it comes to Islamists, perhaps out of a fear of being called names, perhaps wanting to show goodwill to perceived underdogs," Middle East Forum (MEF) President Daniel Pipes told the Investigative Project on Terrorism (IPT). "Whatever the reason, these members are shutting out and discouraging moderate Muslims, precisely when these latter are most needed to offer an alternative to the Islamists' totalitarian vision. Wake up senators, wake up representatives, and do your job."

MEF issued a report on the eve of the advocacy event highlighting some of the radicals who participated in the USCMO lobbying effort in prior years.

Participants lobbied members of Congress and senators about President Trump's visa ban, immigration reform and gun control, among other issues. More than 400 people participated in the event, according to statistics posted on CAIR's Twitter account. They met with a third of the offices in the House of Representatives and half of the 100 Senate offices, engaging with more than 250 elected officials or staffers.

Texas Rep. Sheila Jackson Lee, D-Texas, was the only elected official to address the entire USCMO gathering, but the text of her remarks was not provided.

CAIR Michigan met with Democratic members of their state's delegation, including Sens. Debbie Stabenow and Gary Peters, a video on its Facebook page showed. They also met with Reps. Debbie Dingell, Brenda Lawrence and Dan Kildee. Programming and Outreach Director Asha Noor, who visited the Hill offices, supports the Boycott, Divestment, Sanctions (BDS) movement against Israel and is sympathetic toward Hamas. She claimed in a 2015 tweet that a professor scored her lower because he was a "open Zionist" and she supported BDS.

"@FayZaZu I was about to say.....saw a retweet bashing hamas, especially on a day like this<<<," she wrote in a 2012 tweet posted the same day Israel assassinated Hamas terrorist Ahmed al-Jabari at the start of the 2012 Gaza War.

Noor declared in December that Jerusalem was non-negotiable for Muslims because it houses the Al-Aqsa Mosque and that Israeli settlers were engaged in "genocide" against the Palestinians.

Billoo spread a conspiracy theory last summer that the Trump administration planned to round American Muslims up and send them to internment camps.

"And we know from our experience that unless we have laws in place... and we [know they have done this] with other communities, that they're going to send us to concentration camps," she said.

Billoo previously encouraged Muslims to "build a wall of resistance" against the FBI and compared the Israel Defense Forces (IDF) to ISIS. Like Noor, she accuses Israel of genocide. She also defended Hamas, noting in a 2013 tweet that it was democratically elected to rule the Palestinians. She also compared Israel defending itself from the Palestinians with "Nazi Germany defending itself from Jewish uprising" in a May 2014 tweet. 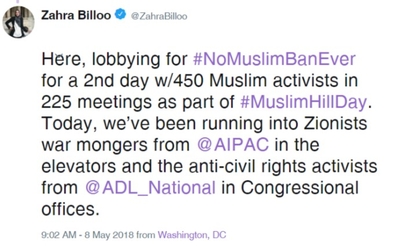 Just last week, she complained that, while she and her fellow Islamists engaged in democracy, supporters of Israel had the nerve to do so, too: "Today, we've been running into Zionists (sic) war mongers from @AIPAC in the elevators and the anti-civil rights activists from @ADL_National in Congressional offices."

CAIR chapters from Michigan, California, Texas, Oklahoma, Minnesota and other locations across the country participated, visiting representatives from their respective states.

Internal records seized by the FBI place CAIR in the heart of a Muslim Brotherhood-created Hamas-support network in the United States. It was called the Palestine Committee, and CAIR Executive Director Nihad Awad, who participated in the advocacy day activities, was a member. The FBI cut off community liaison work with CAIR because CAIR's Hamas ties. Neither CAIR nor Awad has ever acknowledged these connections or claimed to have renounced them.

Former CAIR Connecticut board member and Executive Director Mongi Dhaouadi – currently with the Center for the Study of Islam and Democracy (CSID) – used National Muslim Advocacy Day to discuss Tunisia's elections with members of Congress.

Last June, while still on the CAIR Connecticut board, Dhaouadi posted a video on Facebook by specially designated al-Qaida terrorist Sheikh Abdel Majeed al-Zindani. Al-Zindani was both a close associate of Osama bin Laden and a Hamas fundraiser. He also has been a leader in Yemen's Muslim Brotherhood linked Al-Islah Party. In 2013, U.S. Treasury officials said that al-Zindani was a spiritual leader for al-Qaida in the Arabian Peninsula (AQAP).

Dhaouadi also denied that Palestinian attacks against Israeli security forces were terror attacks. "Resisting the occupation is NOT terrorism it is a legitimate right of defending one self from your land from real terrorists i.e. IDF," Dhaouadi wrote.

MAS and ICNA also participated in the event.

Members of Congress who claim to value tolerance and oppose bigotry contradict their own values by mainstreaming Islamists who normalize anti-Semitism and who rationalize or support terrorism. It's exactly what organizers of the National Muslim Advocacy Day organizers hoped for.