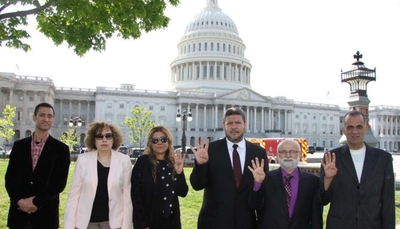 They timed their lobbying Congress about Egypt's mass incarceration and human rights record to coincide with the US Council of Muslim Organizations (USCMO) event, just like last year.

A staffer for U.S. Sen. Robert Casey, D-Penn., expressed sympathy with EAFJ's points about human rights in Egypt, and said the senator shares their concern that the Trump administration won't be hard enough.

"This president doesn't seem to acknowledge the importance of human rights as a security issue," she said.

Elkadi, who was present while she spoke, isn't bashful about advertising his support for the Muslim Brotherhood. "I am [Muslim] Brotherhood and I'm not threatened," he wrote in a 2015 Facebook post. Elkadi and members of his group flashed the Muslim Brotherhood's four-fingered salute on the Capitol lawn during the visit.

Just like last year, congressional staffers were not made aware of Elkadi's support for Muslim Brotherhood-linked terror.

He lamented the 2016 death of Muslim Brotherhood Guidance Bureau member Mohamed Kamal in a shootout with Egyptian security forces. Kamal created a terrorist infrastructure for the Brotherhood after the Egyptian military ousted it from power in 2013. State Department officials added two groups that evolved from Kamal's terror infrastructure, Hassm and Liwa al-Thawra, to the U.S. terror list earlier this year. 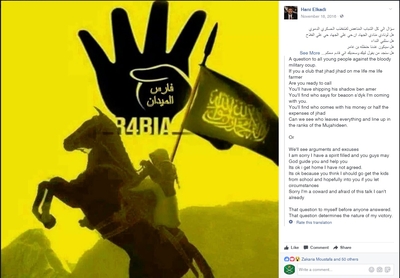 Elkadi posted a Muslim Brotherhood communiqué on Facebook calling his death an "assassination" by "coup criminals" with the hashtag #Kamal_martyrs in October 2016. A month later, Elkadi called "all young people" to wage jihad against the Egyptian regime. He previously posted a communiqué from the Popular Resistance Movement (PRM) in February 2015, an element in Kamal's terrorist infrastructure.

His opinions aren't isolated within EAFJ. Spokesman Mahmoud ElSharkawy, who joined in last year's lobbying but was noticeably absent last week, also expressed support for PRM, which claimed joint responsibility with ISIS for the killing of police officers in Helwan near Cairo in 2015. ElSharkawy mourned the October anniversary of Kamal's death.

It was a year ago that "the criminals in Cairo have announced the assassination of the leader of the revolution, the Martyred Doctor Mohamed Kamal and his companion, the hero and martyr Yasser Shehata," ElSharkawy wrote.

Egypt's Al Bawaba newspaper identified ElSharkawy in 2015 as a member of the International Organization of the Muslim Brotherhood. He allegedly helped fund these terror groups in conjunction with exiled Brotherhood members in Egypt and Qatar.

EAFJ cites liberal democratic values when they meet with Western politicians and speak in English, but they express pro-terror ideas in Arabic on social media when they don't think people outside their circle are looking.