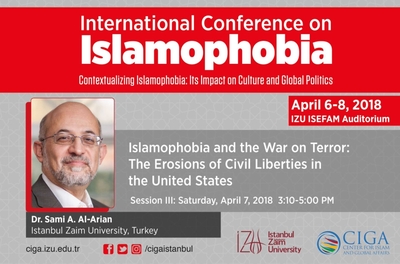 Bigotry is awful – and the purveyors of hatred and discrimination need to be confronted and isolated.

But what happens when those who lament bigotry consistently engage in their own prejudice and animus? What if they do it in concert with a member of a designated terrorist organization who has called for the absolute destruction of a nation?

Ahmed Bedier and Hatem Bazian had to go to Istanbul to find out.

They were among 25 irony-challenged participants at last weekend's "Contextualizing Islamophobia: Its Impact on Culture and Global Politics" conference organized by the Center for Islam and Global Affairs (CIGA). Center director Sami Al-Arian served on the Majlis Shura, or board of directors, for the Palestinian Islamic Jihad (PIJ) terrorist group.

In separate gatherings during the early 1990s, Al-Arian called for "death to Israel" and accepted an introduction during a fundraiser as the head of "the active arm of the Islamic Jihad Movement in Palestine," which rejects any peaceful settlement to the Israeli-Palestinian conflict. Only "the jihad solution and the martyrdom style" can liberate Palestine, the group's bylaws say.

Four years later, he wrote a letter trumpeting a PIJ double suicide bombing that killed 21 Israelis, saying it "is the best guide and witness to what the believing few can do in the face of Arab and Islamic collapse at the heels of the Zionist enemy..."

"I call upon you to try to extend true support of the jihad effort in Palestine so that operations such as these can continue..." he added.

That's the man who organized a conference about "Islamophobia," which is defined as an irrational fear or hatred of Islam and/or Muslims.

"Unfortunately," Al-Arian wrote in an op-ed prior to the conference, "Islamophobia has unleashed a lucrative industry led by dangerous interest groups with extremist political, social, and economic agendas. If unchecked, it threatens perpetual wars and destruction causing immeasurable pain and suffering."

The same can be said for radical Islamist ideology which peddles in Jew-hatred and covets a globe dominated by Quranic doctrine.

We see that immeasurable pain and suffering Al-Arian described in Gaza, where Hamas chooses to divert resources that can rebuild the densely-populated coastal territory in favor of preparing for perpetual war and destruction by building an arsenal and digging tunnels for terrorists to sneak into Israel and try to slaughter civilians.

We see it in the thousands of dead Muslims in Syria, Libya, Iraq and anywhere that Islamic State, al-Qaida and other terrorists try to live by the letter of Muhammad's law.

That's not the problem facing Muslims, conference participants seemed to agree. Supporters of Israel are the problem.

Al-Arian lists Bedier, a former chapter director and fundraiser for the Council on American-Islamic Relations (CAIR), among the "renowned scholars" participating in the conference. Bedier is quick to toss out "dual loyalty" smears against Americans who publicly support Israel.

Bazian is one of the leading advocates for the anti-Semitic Boycott, Divest and Sanctions (BDS) movement targeting Israel. He was forced to apologize in December after retweeting an anti-Semitic image of a Jewish man bragging, "I Is chosen," and saying, "I can now kill, rape, smuggle organs & steal the land of Palestinians." 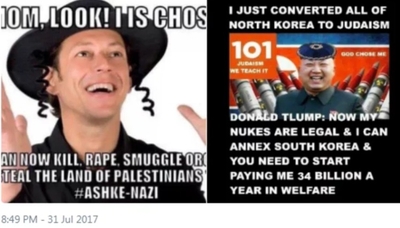 "We, as Muslims, need to do something for him," said Mehmet Gormez, former head of Turkey's religious authority.

In their remarks, Bazian and Bedier reportedly claimed "Islamophobia" is pushed by people who want to keep Muslims marginalized and politically weakened. 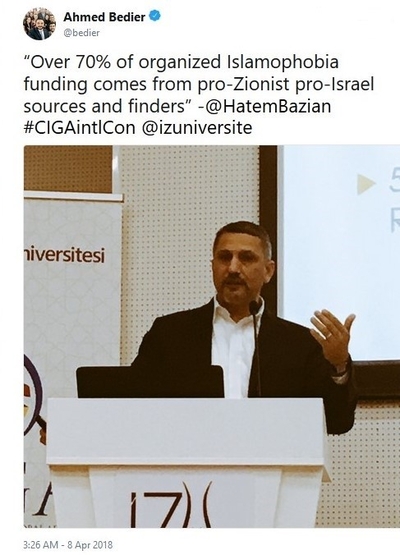 They chose to attend Al-Arian's conference just weeks after he spent an hour on a radio show hosted by a conspiracy theorist who sees the 9/11 attacks – and virtually any act of terrorism committed by Muslims – as "false flag" operations for which Zionists ultimately are responsible. Al-Arian was well aware of his host's baseless, anti-Semitic views because he'd heard some of them during a previous appearance in 2016.

But antipathy toward Jews is ingrained in Al-Arian's psyche.

PIJ bylaws, which weren't yet publicly known when Al-Arian possessed them, call for jihad to create "a state of terror, instability and panic in the souls of the Zionists" and demand "a psychological barrier between the Jews and the Muslim Palestinian people and the creation of a conviction that the coexistence is impossible..."

Not many people would fly 5,000 miles to participate in a conference led by someone who endorsed such violent, hateful objectives. Hatem Bazian and Ahmed Bedier just did.