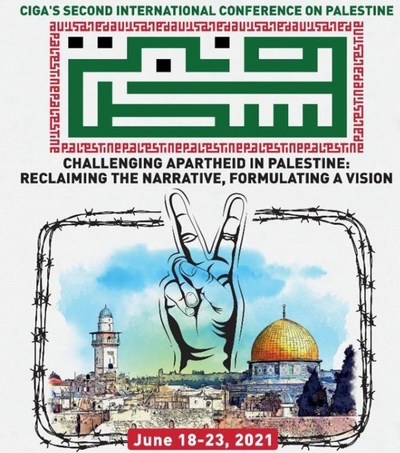 An online conference in Turkey features anti-Israel scholars from prominent American universities. The fact the conference is hosted by an organization led by a convicted leader of the Palestinian Islamic Jihad (PIJ) has not deterred these American scholars from participating.

The weeklong conference, "Challenging Apartheid in Palestine: Reclaiming the Narrative, Formulating a Vision," is organized by Sami Al-Arian's Center for Islam and Global Affairs (CIGA). Al-Arian pleaded guilty in 2006 to conspiring to make or receive contributions of funds, goods or services to or for the benefit of PIJ. Records show Al-Arian was a longtime member of the PIJ Shura, or governing council. He was deported to Turkey in 2015 as part of his plea agreement, and he now heads CIGA at Istanbul Sabahattin Zaim University.

Al-Arian invoked a series of false claims and buzzwords in his opening remarks Friday, claiming "the Zionist movement has been successful in establishing a settler-colonial state in the historical land of Palestine by implementing several strategies and employing varying tactics to ethnically cleanse the Palestinians."

The man who shouted "death to Israel" during a pro-PIJ rally in the 1990s, and solicited donations in the wake of a double suicide bombing "so that operations such as these can continue," excoriated Israel's "use of assassination as a tool to eliminate thousands of Palestinians and other supporters around the world for resisting the brutal occupation."

The global Muslim community, or ummah, cannot realize its full potential without "defeating and dismantling the Zionist project," he said during a Dec. 18 panel discussion. "We cannot pursue an ummah project without actually attaining our real independence. We cannot attain our real independence without dealing with the problem of Israel ... as long as Israel exists, the ummah will stay weak and fragmented, and disunited and divided and dependent and under control."

That kind of rhetoric from the conference organizer, calling for a country's elimination, did not dissuade UCLA's Loubna Qutami from participating in the meeting. Qutami applauded Palestinian youth who "have amplified global Boycott Divestment and Sanctions [BDS] campaigns, and are working to end normalization agreements between their host states and Zionists settler and the Zionist settler-colonial regime."

She emphasized the role of the "resistance from Gaza" that "ended the Israeli assault in 11 days" and its impact on "Palestinian collective consciousness and the psychological orientation of Palestinians and their post struggles toward the cause." That "resistance" came in the form of thousands of rockets fired by Hamas and PIJ at Israeli civilians during last month's fighting between Israel and Hamas.

Qutami is a former International General Coordinator for the Palestinian Youth Movement (PYM) and helped organize its founding conference in Madrid, Spain, in 2008. PYM reportedly may have ties with the Marxist-Leninist Popular Front for the Liberation of Palestine (PFLP), a U.S.-designated Foreign Terrorist Organization (FTO).

BDS advocates have included Palestinian radicals who openly support terrorism against Israel and seek destruction of the Jewish state. By singling out the world's only Jewish state for economic and cultural boycott, BDS is considered anti-Semitic because it ignores countries with far worse human rights records.

On Monday, Rabab Abdulhadi, a professor at San Francisco State University's Arab and Muslim Ethnicities and Diasporas (AMED) Studies, described the Anti-Defamation League's weeklong "Leadership Seminar in Israel" that trains American police forces in Israel as a "deadly exchange" program that "brings U.S. police, and I would call colonial security apparatus along with Israeli military to co-train together."

Since it started in 2003, the ADL program has hosted more than 200 American police leaders to Israel where they meet with their counterparts. No tactical training is involved. Yet Israel bashers have spent years inciting anti-Semitism by baselessly blaming the program for police killings of unarmed black people in America.

As the Investigative Project on Terrorism showed last fall, critics have produced no evidence linking the ADL exchange program and others like it to any American police use of excessive force. And one of the principal groups pushing that false "deadly exchange" narrative now acknowledges "suggesting that Israel is the start or source of American police violence or racism ... furthers an antisemitic ideology."

The April 23 event, like an identical program last September, was canceled after Zoom, the online video conferencing service, refused to host the terrorist on its platform.

"We really idolize somebody like Leila Khaled," Abdulhadi had told a San Francisco newspaper in September, "somebody who actually stands up for herself, speaks for herself, actually goes to a plane and hijacks it," Abdulhadi said.

Nader Hashemi, who heads the Center for Middle East Studies at the University of Denver – a conference co-sponsor – described last month's 11-day Gaza war as "an important turning point that elevated the question of Palestine once again, to the top of the international agenda." He claimed that "public opinion now across the board is now solidly in support of Palestinian rights," and favors "a radical shift in American foreign policy" and "we're starting to see this for the first time in the Democratic Party."

Columbia University Professor Joseph Massad offered the conference a false history in which an "alliance between European anti-Semitism, European colonialism and the Zionist movement" resulted in the "Jewish colonial settler project" and the creation of Israel.

The conference's opening sessions Friday were supposed to include Mohammad Akram Al-Adlouni, a prominent Muslim Brotherhood leader who is reportedly close to Hamas leaders, but he failed to make an appearance.

Al-Adlouni is secretary general of the Global Coalition for Quds [Jerusalem] and Palestine, also one of the conference co-sponsors. He formerly headed the Al-Quds International Foundation, a Lebanon-based charity controlled by Hamas. The U.S. Treasury Department sanctioned the foundation in 2012 for providing "support [to] the families of Hamas fighters and prisoners and to raise money for programs and projects in the Palestinian territories intended to spread Hamas's influence and control."

Al-Adlouni also is the likely author of a 1991 "Explanatory Memorandum" for the Shura Council of the Muslim Brotherhood. The memorandum calls for a "Civilization-Jihadist Process" in which Brotherhood members in America work toward "destroying the Western civilization from within."

While apologists have tried to minimize Adlouni's memo as one man's thoughts, never acted upon, it actually fits in neatly with the Brotherhood's thinking. The Brotherhood promoted a concept, called tamkine, which is "a plan for global domination in stages ... and that includes the West," George Washington University Program on Extremism Director Lorenzo Vidino wrote in his book, The Closed Circle: Joining and Leaving the Muslim Brotherhood in the West.

The explanatory memo became public during the 2007-2008 Holy Land Foundation for Relief and Development (HLF) Hamas-financing trials held in Dallas. It was seized by FBI agents from the home of Ismail Elbarasse, whom prosecutors describe as the "archivist" for the Muslim Brotherhood in America.

Al-Arian's son, Abdullah Al-Arian, an associate professor of history at Georgetown University's Qatar campus, moderated a session on the "Role of Film and the Arts in the Palestinian Struggle" on Wednesday. Nerdeen Kiswani, who heads the virulently anti-Israel Students for Justice in Palestine at the City University of New York (CUNY), spoke on "Dismantling Apartheid: Requirements and Criteria."

Fighting the existence of a Jewish state, she claimed, is good for Jews.

While speakers in past CIGA conferences have engaged in routine Israel bashing, praising the "resistance" and renewing calls for boycotting the Jewish state, a salient fact about this year's conference has been the large participation of American scholars. The attendance of American academics in a conference sponsored by an organization headed by a convicted PIJ leader shows the extent to which Israel bashing, anti-Semitic attitudes and pro-Palestinian propaganda have infiltrated America's higher institutes of learning.