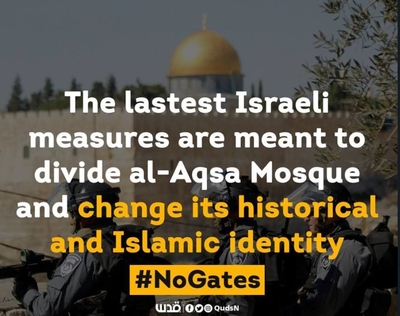 The crisis between Israel and the Palestinians that raged in recent weeks over the Temple Mount/Al-Aqsa holy site in Jerusalem has died down, but the affair provides important clues about the rising ability of fundamentalist Islamists to seize control of the narrative.

Radical rhetoric espoused by those who sought to inflame religious conflict dominated the Temple Mount crisis.

"Israel wants more than ever before to implement its plan for complete control over al-Aksa Mosque," Hamas politburo chief Ismael Haniyeh said, even after Israel moved to defuse the situation. Days earlier, Hamas had called for a "religious war" against Israel.

Islamists in Gaza, Jordan, east Jerusalem, and within the Israeli Arab community, had the upper hand in their ability to push their interpretation of events. They claim Israel wants to take over the holy site and destroy the mosque to make way for a third Temple. This baseless narrative sweeps away the terrorist attack that caused the crisis and presented three Palestinians killed in subsequent clashes with Israeli security forces in Jerusalem as martyrs who died defending Islam.

Not to be outdone by their Islamist rivals, Palestinian Authority (PA) leaders peddled the same falsehoods. Religious Affairs Minister Sheikh Yusuf Idai'is told the official PA television channel that Israel "has plans to destroy the Al-Aqsa Mosque and establish the alleged Temple in its place."

Those seeking religious strife were able to mobilize masses onto the streets, with the help of self-organizing demonstrators and rioters who were infected with the Islamist fervor, and spread it themselves on social media.

Together, these elements forced pragmatic Arab leaders – who do not subscribe to Islamist ideology – to adopt the Islamist narrative, and to deal with Israel as if it was guilty of the Islamic hard-liners' fabricated accusations.

Until the attack, Israel had been relying on intelligence alerts, rather than physical security measures, to defend the site. But the shootings led the Israel Police to ask the Israeli government to beef up security, and install metal detectors.

The government agreed, despite the misgivings of the Israeli defense establishment, which was concerned that the move would fuel the propaganda of fundamentalist forces, leading to unrest and instability.

A Palestinian knife attacker, pledging to "die for Al-Aqsa" on his Facebook page, massacred three members of an Israeli family in their home in the West Bank.

All of these events were driven by incitement to religious violence. The unrest was sparked by the false accusation that Israel was seeking to change the status quo at Al-Aqsa, and that the site needed defending from Israelis schemes. It is a conspiracy theory that has been peddled by Palestinian hardliners for decades, dating back to the days of Hajj Amin Al Husseini in the 1920s and 30s.

Hamas in Gaza and Palestinian Islamic Jihad praised the Temple Mount shooters as "heroic," and called for more attacks. They issued a rallying call to defend Al-Aqsa. A Salafist-jihadist group in Gaza fired two rockets at southern Israel.

Israel responded with tank fire at a Hamas military post.

Turkey, ruled by a pro-Hamas variant of the Muslim Brotherhood, exploited the tensions to urge all Muslims to "protect Jerusalem," and called on Israel to end the crisis. Israel's Foreign Ministry called it "absurd that the Turkish government, which occupies northern Cyprus, brutally represses the Kurdish minority and jails journalists, lectures Israel, the only true democracy in the region. The days of the Ottoman Empire have passed."

Iran helped fuel the unrest, Israel Hayom reported, by sending protesters "tens of thousands of ... prepackaged meals along with notes in each one citing a famous quote attributed to 1979 Iranian Revolution leader Ayatollah Ruhollah Khomeini: 'With the help of Allah, Palestine will be liberated! Jerusalem is ours.' The note also depicted the Dome of the Rock and the Palestinian flag."

Additionally, a senior Iranian official reportedly met with Hamas and Palestinian Islamic Jihad representatives in Iran, offering them assistance for Palestinians injured in clashes. The IRGC released a statement, condemning "the Zionist regime's  aggressive and criminal actions against Al-Aqsa mosque."

In Israel, Sheikh Raed Saleh, the former leader of the now banned Islamic Movement – a sister organization to Hamas – led a funeral procession for the three Arab Israeli terrorists. Thousands of mourners marched belligerently by the coffins of the terrorists, shouting, "By fire and with blood we will redeem you, Al-Aqsa," and, "You are the martyrs of Al-Aqsa."

Palestinian social media buzzed with calls to defend Al-Aqsa. The Islamist narrative had won the day.

Israel tried to challenge this mythology by directly addressing Palestinians. "So that the truth is clear, when did the Temple Mount incidents erupt?" IDF Coordinator of Government Activities in the Territories Maj.-Gen. Yoav Mordechai asked in Arabic on Al Jazeera. "A week ago. After a terror attack was committed by three Muslims, who entered the Temple Mount with weapons and opened fire. Israel does not want to change the status quo. This is a clear message to the world from the Muslim world."

His message appeared to largely fall on deaf ears. With the fundamentalist rhetoric leading the way, even pragmatic Arab leaders, some of whom rely on cooperation with Israel for the very stability of their rule, felt the need to play according to the radical playbook, in order to avoid being tagged as Israel's 'abettors.'

During the Temple Mount unrest, Abbas cut security coordination between his forces and the Israel Defense Forces (IDF).

"Jerusalem is ours. It is our capital and our sovereignty. As long as the situation in occupied Jerusalem does not return to what it was before July 14 [when Israel installed metal detectors], there will be no changes [in our position]," Abbas said, according to a Middle East Media Research Institute (MEMRI) translation.

Promoting the lie that the Al-Aqsa Mosque required protection from Israel, Abbas told east Jerusalem Palestinians, "What you did was defend your honor, your religion and your holy sites. It was the true answer to those who wish to harm our holy sites and the principles of our faith. We supported you in what you did and are [still] doing. We decided to suspend the security coordination; [that decision] still holds. We [decided to] defend the holy sites; that still holds as well."

The Fatah movement, which runs the Palestinian Authority, added fuel to the fire. With the full knowledge that it was risking new clashes, Fatah's Central Committee called for mass protests.

Egypt and Jordan, both of whom are busy combating Islamist threats at home, called on Israel to remove the metal detectors.

The situation in Jordan became even more complicated when an Israeli embassy guard was stabbed by a local youth. The guard opened fire to defend himself, killing the attacker and accidentally shooting dead a second Jordanian citizen who was nearby.

Jordan's King Abdullah refused to allow the Israeli guard to leave Amman, reversing his decision only after Israel said it would remove the metal detectors.

King Abdullah, one of the Arab worlds' most moderate leaders, whose Kingdom shares many common interests with Israel, still felt the need to issue a statement vowing to prevent the "Judaization" of holy sites in Jerusalem.

Jordan controls the Jerusalem Islamic trust in charge of the Al-Aqsa Mosque, called the Waqf. Behind the scenes, Jordan helped end the Temple Mount crisis, which threatened to destabilize it.

The Waqf told Islamic worshipers that they could re-enter the Temple Mount after Israel had removed the metal detectors.

Even after the crisis reached a resolution, the Palestinian Authority remained highly wary of being labeled as a collaborator with Israel.

An aide to Abbas said security coordination with Israel would only be resumed "gradually," to avoid giving the impression that the Palestinian Authority is too enthusiastic about working with the Israeli military in the West Bank.

The crisis provides a clear indication of the influence that Islamist propaganda has on the area. Even Arab leaders who are directly threatened by radical forces feel they must march according to their drumbeat, or risk their very legitimacy.

Israel's decision to dismantle the metal detectors was designed to prevent the Islamist pyromaniacs from using the Al-Aqsa crisis to set the region on fire.

The fact that the Islamists came so close to succeeding, however, is the latest indication of who is in charge of the popular narrative in the region.