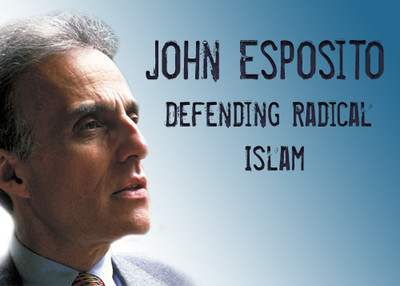 John Esposito has enjoyed substantial respect in his role as a Georgetown University professor of Religion and International Affairs, specializing in Islamic studies, as well as the founding director of the Prince Alwaleed bin Talal Center for Muslim-Christian Understanding at the Walsh School of Foreign Service.

But whether he deserves that respect is put in serious doubt when assessing his cozy ties with radical Islamists and his repeated defense of their ideology -- a relationship that is detailed in a newly issued report by the Investigative Project on Terrorism (IPT).

The report acknowledges Esposito's impressive pedigree as an award-winning professor, an author of more than 30 books, a consultant for the Gallup polling organization and an expert on Islam frequently called upon to brief government agencies including the State Department, FBI, CIA, Department of Homeland Security and various branches of the military.

But it determines that his "outspoken defense of radical Islam calls his reliability as an objective academic and impartial educator into question."

"Esposito's academic standing provides him an opportunity to defend radical Islam and promote its ideology - including defending terrorist organizations and those who support them, advocating for Islamist regimes, praising radical Islamists and their apologists, and downplaying the threat of Islamist violence and involvement with Muslim Brotherhood legacy groups in the U.S.," the report declares.

"Perhaps nothing illustrates this point more clearly," it notes, "than Esposito's intimate working relationship with two organizations considered Muslim Brotherhood fronts by federal prosecutors" -- the Council on American-Islamic Relations (CAIR) and the United Association for Studies and Research (UASR). Both groups are cited in court evidence detailing a Hamas support operation in the United States.

Here are some of the highlights presented in the report:

Esposito has worked with, or defended, three entities which comprised the "Palestine Committee," a U.S-based committee established to help Hamas politically and financially. He appeared as a defense expert witness in the 2008 trial of the Holy Land Foundation for Relief and Development (HLF), repeatedly appears at fundraisers for CAIR -- a group whose two key founders participated in a secret 1993 meeting called to discuss ways to derail the new Oslo Peace Accord -- and co-sponsored a conference with the UASR. UASR was created by Hamas deputy political director Mousa Abu Marzook and directed by Ahmed Yousef, now the Hamas spokesman in Gaza.

The professor has made repeated statements defending the terrorist organizations Hamas and Hizballah. A 2006 article published in the Arabic newspaper Al-Sharq al-Awsat quoted him as saying, "some object to sitting at the same table to engage in a dialogue with Hamas or Hizballah but I see no problem with that." He made that and similar statements portraying Hamas and Hizballah as legitimate political parties with whom the United States should negotiate well after both were designated Foreign Terrorist Organizations by the State Department.

In an article in the September 2006 edition of Harvard International Review, Esposito criticized the United States and Europe for condemning Hamas, writing that "despite HAMAS' victory in free and democratic elections, [they] failed to give the party full recognition and support."

He has been similarly loath to condemn Hizballah. While in the past "there were times when it engaged in aggressive actions that clearly could be seen as terrorist actions," he said in an interview with the Middle East Affairs Journal in 2000, "Hezbollah in recent years has shown that it operates within the Lebanese political system functioning as a major player in parliament. But when it comes to the south it has been primarily a resistance movement…. Hezbollah has made it clear that such actions would not exist if the Israelis would pull out of the south. Many outsiders refuse to see the Israeli occupation of Southern Lebanon as an occupation and as illegal."

The same predisposition to reject terrorist motives characterizes Esposito's attitude toward the Muslim Brotherhood. When shown an internal Palestine Committee memo that described the Brotherhood's goal as "eliminating and destroying the Western civilization from within and 'sabotaging' its miserable house by their hands and the hand of the believers so that it is eliminated and God's religion is made victorious over all other religions," during his HLF trial testimony, he doubted the memo's authenticity:

"If it is authentic, it would be made by a radical or terrorist organization. That is not something that I would associate with the Muslim Brotherhood….. You wouldn't guess that it was a Muslim Brotherhood statement."

Esposito also defended the Tunisian political group An-Nahda, also known as the Renaissance Party. An-Nahda is outlawed in Tunisia for its use of violence.

The professor remains a self-described "very close friend" of former University of South Florida Professor Sami Al-Arian, cited in court evidence as a former board member of the terrorist group, Palestinian Islamic Jihad. Al-Arian pled guilty in 2006 to conspiring to provide goods and services to the PIJ. Despite Al-Arian's admitted ties, Esposito continues to laud him as "an extraordinarily bright, articulate scholar and intellectual-activist, a man of conscience with a strong commitment to peace and social justice."

"God help Sami Al-Arian in terms of this administration and many others who have to live through this," he said at a CAIR Dallas banquet in August 2007.

Esposito has engaged in a series of academic partnerships with Azzam Tamimi, a known member of Hamas since at least 1999 and a man who has repeatedly praised suicide bombings. Speaking in South Africa in July 2002, Tamimi declared, "Do not call them suicide bombers, call them shuhada [martyrs] as they have not escaped the miseries of life. They gave their life. Life is sacred, but some things like truth and justice are more sacred than life."

Esposito has praised Yusuf al-Qaradawi, a spiritual leader of the Muslim Brotherhood known for his militant religious rulings and political commentary in support of terrorism and suicide bombings, as well as his fatwa stating that Muslims killed while fighting American forces in Iraq are martyrs. Commenting on suicide bombings in April 2001 Qaradawi said, "they are not suicide operations…these are heroic martyrdom operations."

In spite of such rhetoric, in a 2003 article in the Boston Review, Esposito included Qaradawi on a list of religious scholars with a "reformist interpretation of Islam and its relationship to democracy, pluralism and human rights."

More broadly, Esposito has consistently downplayed the threat of Islamic violence. "Some hold the Muslims guilty until proven innocent. It is also possible to use words and terms that offend Muslims but that are unacceptable about others, such as Jews or Americans of African origin," Al-Sharq al-Awsat quoted him as saying in May 2006. That same year he wrote in the Harvard International Review that it is vital to recognize that "widespread anti-Americanism among mainstream Muslims and Islamists results from what the United States does- its policies and actions."

What consequences have all these questionable positions and relationships carried for Esposito?

None to speak of, the IPT report suggests. "Esposito's coziness with terrorist supporters, and his frequent criticism of U.S. policy as a cause of terrorism has not hurt his standing with government officials," it notes. Indeed, the State Department continues to book the professor "to address international audiences about life for Muslims in America and to advance his argument that better understanding of religious and cultural differences is a key to a more peaceful world."

In Praise of Esposito

May he live a long and productive life as promoter of peace and intrepid interpreter of the finer fabric of Islam.

In10 of june 2014 in UK muslim brothers (MB) hired a man with many academic titles to improve their external image.When he started to speak about MB all his titles falled down like dried leafs,the man is either ignorant or trying to gain some dollars from the fools.If he is ignorant(doughtful) ,he must read the dark,bloody history of MB in Egypt since 1928.

Espasito - I was a believer in the old I.R.A. principals of a "Freedom Fighter" in the 20's-30's & beyond, but not now they are mostly filled with Drug Barons and Protection Gangsters, o.k. that was maybe the case in the lot of them in those days but the I.R.A. were a Political Organization at first, but they took to threatening the very People they claimed to be fighting for, which of course was counter-productive.

There will never be peace with Muslims. It simply is not in their character, religion, and personal beliefs. Esposito is in the pay of his Saudi masters and will always publish erudite tomes in support of these monsters.

Media, Money are controlled by zionists (not jews)

Former Prime Minister Menachim Begin is a freedom figheter by mascaring thousends of innocent civilians. to add insult to the injury, he won "Noble Prize" for peace!

Professor Espisoto is expressing his veiws. He did not kill any infants and prganant women!

what kind of a wrold we are living in.