Claims of Jewish control of the media and American politics and alleged war-mongering by Israel and America dominated speeches Friday at an Iranian-inspired rally in Washington, D.C.

"If you love America, you love lying, you love rape, you love murder, you love killing," said Abdul Alim Musa, imam of Washington D.C.'s Masjid Al-Islam and head of a separatist movement called As-Sabiqun. "And then, the Zionist, diabolical, sinister Israeli. Nobody in history, they cry about some Holocaust, we had five or ten people get killed."

Similar rallies were held in New York, Chicago, Detroit and other cities. The rallies were promoted by American University's Students for Justice in Palestine chapter, and through personal Twitter posts by Cyrus McGoldrick, advocacy director for the Council on American-Islamic Relations (CAIR) New York chapter.

Resolutions adapted by Quds Day organizers endorse Hamas rule and call for a "one-state solution" to the Israeli-Palestinian conflict. The "one-state" idea is a non-violent means of eliminating Israel, because the greater number of Palestinians would eliminate Israel as a Jewish state. "We support a peaceful dismantling of the Zionist State and a referendum with participation from the Christians, Jews and Muslims within the present day borders of the Zionist State, as well as participation from Palestinians within the occupied territories and refugee camps scattered across the region in deciding their fate," a resolution reads.

The resolutions dismiss Palestinian terrorism as "side issues."

The crowd at Washington's Dupont Circle was reminded that Quds Day is the creation of Iranian Ayatollah Khomeini. In Iran, President Mahmoud Ahmadinejad used the day to call for Israel's elimination, calling it "a cancerous tumor."

"Many of the problems facing the Muslim world are due to the existence of the Zionist regime," Ahmadinejad said.

Ahmadinejad's statements were condemned as "outrageous and hateful" in a rebuke from European Union foreign affairs director Catherine Ashton. "Israel's right to exist must not be called into question," she said.

But Ahmadinejad made similar statements earlier this month, blaming 400 years of problems on "the horrendous Zionist clan" dominating global politics, media and economics. "Any freedom lover and justice seeker in the world must do its best for the annihilation of the Zionist regime in order to pave the path for the establishment of justice and freedom in the world," he said.

"Hitting these targets with a small number of rockets will turn ... the lives of hundreds of thousands of Zionists to real hell, and we can talk about tens of thousands of dead," said Hizballah chief Hassan Nasrallah.

Unlike previous Quds Day rallies in Washington, this year's event featured softer rhetoric and no Hizballah flags. But speakers still pushed anti-Semitic theories and strident anti-Israeli and anti-American rhetoric. A compilation of examples appears below.

"The reality is in this country, the Zionist thugs who manipulate politics and the media as well, they often want us to hide to keep the message of support for the Palestinian people only off to the side," said Eugene Puryear of the leftist ANSWER Coalition. "And I think it's very important to note that we will not hide anymore."

Though Bashar al-Assad's regime in Syria continues to slaughter civilians, no speaker mentioned the plight of Syrian citizens. Rather, it is Israel that is responsible for "one of the greatest crimes going on in the world today," Puryear said. "It is "the most divisive force, really one of the most divisive force (sic), along with the U.S. imperialist government, who are their allies, and the entire world, in sowing strife and destruction, everywhere they go."

American politics is held hostage by candidates to Jewish interests, said Code Pink's Medea Benjamin. She said there was no difference between Barack Obama and Mitt Romney on dealing with the Israeli-Palestinian issue or on whether to attack Iran to stop its nuclear weapons program. That's because "both of them [are] pandering for the votes of a very small minority of people in the United States and [are] really looking for money for their campaigns."

Mauri Saalakhan, a writer and conspiracy theorist, discussed a poster showing Muslims either imprisoned for terrorism-related convictions or killed in U.S. drone strikes to argue that "the devastation that is taking place in Muslim lands, in occupied Philistine, or as it is commonly known today – Palestine, in Iraq, in Afghanistan, in Somalia, in Yemen, in Pakistan and many of these other countries in the international community – It is also taking place here in America." 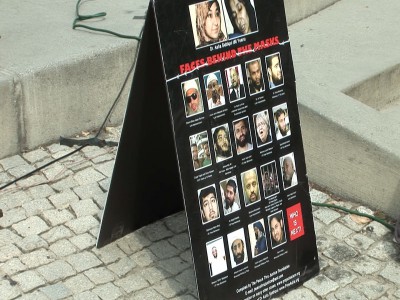 Defense attorney Lynn Stewart, who was convicted of helping her client, blind Sheikh Omar Abdel Rahman send messages to other terrorists, is imprisoned "because she was willing to represent Sheikh Omar Abdel-Rahman a little too effectively," Saalakhan claimed. Abdel-Rahman is considered the spiritual leader behind the 1993 World Trade Center bombing and was convicted in a subsequent plot to bomb New York City tunnels and landmarks.

Others on the poster include "Lady al-Qaida" Aafia Siddiqui, Palestinian Islamic Jihad board member Sami Al-Arian, Luqman Abdullah – a Detroit imam killed by FBI agents trying to arrest him after he opened fire first, blind, al-Qaida cleric Anwar al-Awlaki, and Ali al-Tamimi who was convicted of urging followers to fight American troops following 9/11.

But it was Musa who was the most explicit, placing Israel in a "triangle of terror" along with the United States and Saudi Arabia. Terrorism by al-Qaida and the Taliban are ruses, he said, called in "any time there is an internal need to subvert the Muslims" and to justify killing Muslims and destroying Islam.

Musa made similar comments Friday in an appearance on Press TV, Iran's English-language media outlet, discussing the "triangle of terror" and Israel's control over the global media. Press TV also did a feature report on Friday's rally.

Quds Day is a hate fest centered on a call to destroy an existing country. The speakers in Dupont Circle may have been more subtle than Ahmadinejad and Nasrallah, but their message, made clear in resolutions, was no less violent. It's not about Israeli policies. It is Israel's very existence that they want eliminated.

Will History Repeat Itself

Hitler declared that Germany's problem was the Jews. First, they needed to be isolated. Then they needed to be annihilated. Then, German peoples, in other countries, needed to live under German law. Then World Ward 2, resulting in millions of deaths. For Hitler, substitute radical Muslim ....

This "hatefest," in addition to being sponsored by the Iranian regime, is also supported by the American ultra-left, including the ANSWER Coalition and Madea Benjamin of "Code Pink." ANSWER is a Marxist organization, whose initials should accurately stand for "Anti-Semitic, Neo-Stalinist, Sectarians, Waging, Eradication of, Reason." Madea (real name Susan) Benjamin, founder of "Code Pink (Truth in advertising: a real genuine "PINKO" organization)," is a typical leftist "self-hating Jew," who has no scruples against betraying her people and country, if it advances the Ayatollah's agenda. She is one of those whom Lenin accurately described as "useful idiots." Certainly, Israel has its problems and is not perfect, but try opening a Sufi Mosque, a Catholic Church, or a Synagogue in Iran. You can't do any of those in Iran, but you can do all of them in Israel!

New Religion in the West

There is a new religion (disease) in the West called "Political Correctness". This religion is almost always fatal especially when it comes to Islamists because this religion (disease) is an "enabler". It enables Islamists to come to Western countries, (perhaps infiltrate is a better word) and use our laws against us (freedom of speach) while the adherants of the political correct religion are too afraid to speak up for fear of hurting someone's feelings. The West has never before been in more danger than it is now because of this political correct religion.

This octogenarian Native Washingtonian is sickened at the image of that famous statue at Dupont Circle being the backdrop behind those Muslim banners and those ranting Muslim agitators.

Not during the Cold War days did we see public park demonstrations in favor of Soviet infiltration and subversion.

Such demonstrations by any Japanese in Washington after their sneak aerial attack on Hawaii would've been unthinkable.

So, why now, during our war against encroaching, infiltrating Muslims do we see Muslims using our local District of Columbia landmark as a stage? .....against us? .....because we Americans in our lethal political correctness fail to admit to ourselves that we are indeed at war with Muslims and their Islam, and have been in a shooting war against these Muslims for a decade now, after their own sneak aerial attacks against New York and Washington.

These Muslims repeatedly declare their war against us Americans as the Great Satan. Why can't we wake up and take them at their word?

If they hate America they're free to leave

Those who bless Israel God will bless, and those who curse Israel God will curse. It's apparent to me that their hatred of Israel and America causes them to say what they say, but they need to get their facts straight. It's not "Al Quds," it's Jerusalem, and it's the capital of Israel, not "Palestine." Such hatred of Israel reminds me of satan's original hatred of God, and the Bible is clear about what will happen to those who curse His land. As for their hatred of America, what are they doing here? They are more than welcome to leave.