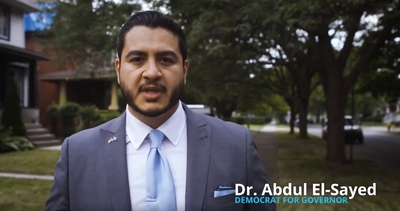 While polls show him lagging in third place in a three-candidate primary, Abdul El-Sayed promises to shock the political world Aug. 7 by becoming Michigan's Democratic nominee for governor.

He's running an ambitious campaign that mirrors the success political novice Alexandria Ocasio-Cortez used to knock off incumbent U.S. Rep. Joe Crowley last month in a New York primary. Volunteers are knocking on thousands of doors. His platform calls for a universal health care for all Michigan residents and free college tuition for students whose parents make less than $150,000.

He has campaigned in a t-shirt that reads, "Abolish ICE."

The 33-year-old Rhodes Scholar earned his medical degree at Columbia University and ran Detroit's public health system before seeking office. The Detroit News describes him as a "far-left Democrat" running on a Bernie Sanders-like progressive agenda.

Sanders endorsed El-Sayed Wednesday, praising the candidate's healthcare proposals and saying El-Sayed would "fight for a government in Lansing that represents all the people, and not just wealthy special interests." Ocasio-Cortez also endorsed him and agreed to campaign with him this weekend.

El-Sayed is trying to become the nation's first Muslim governor. That might be a nice milestone. But his connections and actions over the years indicate that – while his political agenda is "progressive," his core beliefs are rooted in very conservative Sunni ideology. 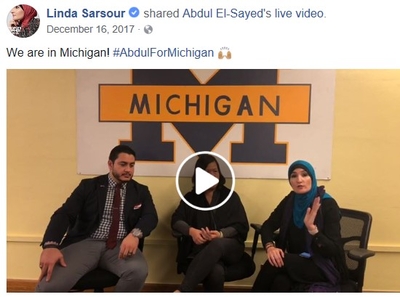 For starters, his candidacy has been embraced by Linda Sarsour, a rabidly anti-Israel activist who looks up to extremist clerics and who served as a key Sanders surrogate in 2016. 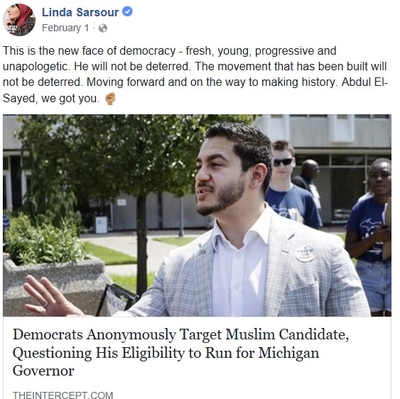 In addition to her political activities, Sarsour is a frequent speaker at Council on American-Islamic Relations (CAIR) fundraisers. While it touts itself as a civil rights organization, CAIR was created by Muslim Brotherhood members in the United States to join a network of charities and other groups charged with helping Hamas politically and financially.

Evidence to prove this came out during a 2008 Hamas-financing prosecution in Dallas. FBI policy since then prohibits formal interaction with CAIR except in criminal investigations. Still, El-Sayed spoke last October at CAIR's 23rd annual banquet and fundraiser in Arlington, Va.

El-Sayed's connections with Muslim Brotherhood-tied groups date back at least to his college days. He served as the University of Michigan's Muslim Students Association vice president. MSA was created in 1963 by Muslim Brotherhood members who came to the United States to complete their education. An MSA history acknowledges that its founders saw a "responsibilty (sic) of spreading Islam as students in North America. The main goal was always Da'wah [proselytizing]."

Da'wah is a key element of the Muslim Brotherhood's ultimate ambition to spread the faith globally and create a world governed by sharia. "It is the nature of Islam to dominate, not to be dominated," wrote Brotherhood founder Hassan al-Banna, "to impose its law on all nations and to extend its power to the entire planet.

Five years after graduating, El-Sayed stood by the Brotherhood in Egypt as it moved to consolidate its new-found power. Led by President Mohamed Morsi, the Brotherhood's political parties rose to power in 2012 after Arab Spring protests led to dictator Hosni Mubarak's fall. Months late, Morsi declared near-absolute power in an edict that led to a purge of the military, police and media. The over-reach led to another popular uprising, with millions of demonstrators in the street by the following summer. Morsi was ousted July 1, 2013.

But El-Sayed, a dual American and Egyptian citizen, didn't see a problem with Morsi's power grab. He lent his name to a Nov. 25, 2012 statement supporting the move.

"We, leaders of the Egyptian community support the revolutionary decisions taken by the president, and we demand a purging of the media and the police as soon as possible," an IPT translation of the Arabic statement said. "We do not hide that we do not fear the existence of such powers in the hands of the President. We would like the President to clarify that this constitutional declaration will ends [sic] once the writing the Constitution has been finished. We confirm that we as Egyptians Americans strongly reject those voices which are seducing America and Europe to take a stand against the Egyptian regime. We will stand shoulder to shoulder in support of the elected president."

Others standing "shoulder to shoulder in support" include CAIR, the Muslim American Society – also created by Muslim Brotherhood members in the United States – and Islamic Relief. El-Sayed's name included a reference to him being in New York in 2012. His resume shows he was working at that time as a project coordinator at Columbia University's Department of Epidemiology.

El-Sayed may not have much to advance these kinds of issues as Michigan's governor. And a new poll out Friday morning gives him 19 percent support among primary voters, less than half expected to go to front-runner Gretchen Whitmer. But first-time candidates, especially young ones, often wage statewide campaigns to increase their name recognition and build a political organization to set up future runs. Win or lose, we likely haven't seen the last of Abdul El-Sayed.