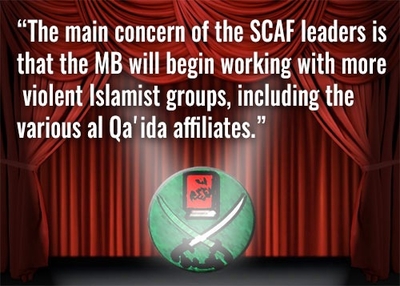 Former Secretary of State Hillary Clinton's emails suggest that she may have known about connections between the Muslim Brotherhood (MB) and hardcore jihadist groups such as al-Qaida early in the 2011 Arab Spring.

Clinton confidante Sidney Blumenthal noted in an April 7, 2011 email that Egypt's military leaders expressed concerns about contacts between the MB and al-Qaida. The Supreme Council of the Armed Forces (SCAF) reportedly feared that the Brotherhood would work with various violent Islamist groups, including al-Qaida affiliates.

"The main concern of the SCAF leaders is that the MB will begin working with more violent Islamist groups, including the various al Qa'ida affiliates," Blumenthal wrote.

A source "with access to the highest levels of the MB," including its Supreme Guide Mohamed Badie, privately told Blumenthal that the relationship between the MB, al-Qaida and other radical groups was "complicated."

"Egyptian military intelligence is aware of the fact that these contacts exist, but believe that the MB, under the influence of ... [the] moderates, is carefully controlling its contacts with these radical/terrorist groups, in an effort to avoid providing the military with an excuse to move against them," Blumenthal wrote.

Blumenthal's source claimed that Mohamed Morsi admitted that the Brotherhood's looming Islamist government in Egypt would find it difficult to control the rise of al-Qaida and other radical/terrorist groups, according to a Dec. 16, 2011 email. No context is provided for this statement apart from Morsi also noting that the younger generation of Egypt's military had become Islamized and anti-American despite training by the United States. The email also notes that younger officers would support Egypt becoming an Islamist state more than the current crop of generals.

"This is highly speculative but interesting," Woolsey said. "The issue with the emails is classification. What matters is the sources and methods."

These emails from Hillary Clinton's private server, written while she was secretary of state, were made public as a result of a Judicial Watch lawsuit under the Freedom of Information Act (FOIA). Many are alleged to contain potentially classified information, and this remains under FBI investigation.

Egyptian security sources recorded calls between Morsi and al-Qaida leader Ayman al-Zawahiri while he Morsi was in power, according to a Nov. 22, 2013 article in Egypt's El-Watan newspaper. Morsi allegedly agreed to grant a presidential pardon to 20 terrorists, including one al-Zawahiri had known since childhood, and another who ran Ansar Bayt al-Maqdis – now known as ISIS's Sinai province.

Communications between Morsi and al-Zawahiri began during the first month of his presidency. Zawahiri's brother, Mohamed, mediated the initial contacts between them.

"Rule by God's law for us to stand beside you, there is no so-called democracy, then get rid of your opponents," al-Zawahiri told Morsi, according to the El-Watan transcript.

Al-Zawahiri and Morsi allegedly agreed to cooperate in establishing training camps in Sinai and near the Libyan border where they could create an army to defend the Brotherhood regime. Morsi allegedly met with an emissary of Zawahiri's at a Pakistani hotel for two-and-a-half hours, and this reportedly resulted in the international organization of the MB giving al-Qaida $50 million.

Morsi called al-Zawahiri asking for his help soon before the military toppled him, according to the Al-Watan report.

"We will fight the military and the police, and we will set the Sinai aflame," al-Zawahiri allegedly told Morsi.

The pro-military newspaper's reporting has been called into question in the past. Its editor remains under investigation for falsifying a report about an Islamist terror cell.

Attacks in the Sinai increased following Morsi's fall. The suggestion by Brotherhood leader Mohamed el-Beltagy following Morsi's deposition that "Attacks in Sinai would stop the second President Mohammed Morsi is reinstated," adds to evidence of Brotherhood connections with al-Qaida, according to Michael Meunier, an Egyptian activist who previously worked closely with the Egyptian government.

"There is a clear indication of coordination between the Muslim Brotherhood and al-Qaida in Sinai," Meunier said.

If true, the ties between the MB and al-Qaida challenge the academic contention that the two groups are mortal enemies. This contention was based upon mutual criticisms, such as al-Zawahiri's 2006 condemnation of the MB's participation in democratic elections.

Director of National Intelligence James Clapper invoked the idea that the MB and al-Qaida were opposed to each other during February 2011 testimony before the House Intelligence Committee.

"The term 'Muslim Brotherhood'...is an umbrella term for a variety of movements, in the case of Egypt, a very heterogeneous group, largely secular, which has eschewed violence and has decried Al Qaeda as a perversion of Islam," Clapper said.

A Feb. 16, 2011 email from an unnamed State Department official who helped draft Presidential Policy Directive-13  – a document that helped frame U.S. policy surrounding Muslim Brotherhood rule in Egypt and elsewhere in the Middle East – echoed Clapper's remarks. U.S. policy should not "be driven by fear," it said, and if it didn't distinguish the Brotherhood and al-Qaida, it wouldn't be able to adapt to changes in the region.

Other government documents corroborate Blumenthal's contention that the Brotherhood and al-Qaida are linked.

The Clinton emails describe a definitive personal link between the Brotherhood and al-Qaida in Libya dating from Clinton's tenure as secretary of state in the person of Ali al-Sallabi, who founded the al-Qaida linked Libyan National Party (LNP).

Blumenthal noted in a July 3, 2011 email that the LNP was dominated by former members of the al-Qaida-linked Libyan Islamic Fighting Group (LIFG), "who, according to sensitive sources, maintained ties to al Qa'ida during their struggle with the forces of former dictator Muammar al Qaddafi."

A March 24, 2011 Libyan intelligence document claims that al-Sallabi coordinated the effort by the international Muslim Brotherhood to assist the LIFG in its fight against Gaddafi.

Similarly, Rached al-Ghannouchi, head of Tunisia's Brotherhood-linked Ennahda Party, attempted to work with al-Qaida linked Ansar Al-Sharia and its late leader, Abu Iyadh – a former Bin Laden ally sanctioned by the U.S. after 9/11 – during the Arab Spring. Abu Iyadh was responsible for al-Qaida's assassination of Northern Alliance leader Ahmed Shah Masood two days before the attacks on the Twin Towers and the Pentagon.

These examples also include connections between the Yemeni MB and al-Qaida through Sheikh Abdul Majid al-Zindani. Treasury Department officials described al-Zindani as a "Bin Laden loyalist" in a 2004 press release. He also helped al-Qaida leader Anwar al-Awlaki, while serving on the board of the Brotherhood-linked Union of Good, which raises funds for Hamas.

Al-Qaida and the Muslim Brotherhood have also used many of the same funding mechanisms, such as the Lugano, Switzerland based Al-Taqwa Bank.

In other correspondence, Blumenthal reported that "MB leaders are also pleased with the results of discussions with the United States Government, and the International Monetary Fund (IMF), both of which, in the analysis of the MB leaders, appear to accept the idea of Egypt as an Islamic state."

Western business and diplomatic leaders at the 2012 World Economic Forum in Davos "appeared to accept" an end to Egypt's role as a partner with Israel, Blumenthal wrote, even if the Egyptians had no desire for a military confrontation with the Jewish state.

Brotherhood members, including Supreme Guide Mohamed Badie, advocated an Islamic government based upon the Turkish model, in which civilians rather than clerics rule. All legislation passed by such a government must conform to the Islamic law. Egypt's 2012 constitution included this principle, which subjected legislation for review by Al-Azhar University, Sunni Islam's most important academic institution. Gamal al-Banna, brother of the Muslim Brotherhood founder Hasan al-Banna, warned prior to his death in January 2013, that religious law would always prevail in such a system.

"If nothing else, the civilian and religious outlooks will differ and will therefore surrender to the religious outlook," al-Banna said in a 2011 interview with Al-Masry Al-Youm. "Egypt should thus become a civil state, without involving the detailed legislation of Islam."

Despite this knowledge Hillary Clinton and the Obama administration chose to embrace the Muslim Brotherhood as just another political party.

Meunier, who helped organize the demonstrations that toppled former President Hosni Mubarak, doesn't find any of these revelations surprising.

"To have that information and to ignore it is criminal. I kind of had an idea about this way back when [Clinton] came to Egypt, and I refused to meet with her when she requested a meeting with me," Meunier said. "We knew that she was colluding with the Muslim Brotherhood.

"She was encouraging and working with a terrorist organization."

Business as usual for the State Dept.

Those who, like Hillary Clinton and her predecessors, have chosen to proselytise for the Muslim Brotherhood should never be allowed to hold public office.

The truth is out there, but in a country populated by ostriches, it is usually ignored in favour of popular mythology.

The State Dept. diplomatic cables (WikiLeaks) reveal a cynical, Arabist attitude by the foreign service when it comes to the Muslim Brotherhood.

"The American Embassy in Cairo briefs Robert S. Mueller III, the F.B.I. director, before a visit set for early 2006. The cable notes that candidates from the Muslim Brotherhood have done quite well in the just-completed elections and notes, "The Egyptians have a long history of threatening us with the M.B. boogeyman." http://tinyurl.com/pbpcwlr

"President Hosni Mubarak of Egypt, meeting with the F.B.I. director in 2006, "slammed Egypt's Muslim Brotherhood as a 'dangerous' and duplicitous movement with nebulous links to terror." His intelligence chief, Omar Suleiman, warned that the Brotherhood had "spawned '11 different Islamist extremist organizations.'" http://tinyurl.com/gkvqw9n

The love affair between Washington and the "Brothers" has continued for over a half a century and like a "true lovers' knot" this affair shows no sign of weakening. http://tinyurl.com/4scrucn