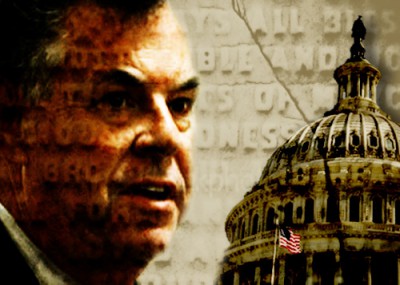 The fifth House Homeland Security Committee hearing on radicalization within the Muslim community ended Wednesday much as last year's inaugural hearing began: With committee Democrats criticizing the premise and diminishing the views of witnesses.

The hearing, "The American Muslim Response to Hearings on Radicalization within their Community," featured three Muslim American activists describing their first-hand experiences identifying and challenging extremist viewpoints and visceral reaction that often generates.

Those accounts were largely dismissed, however, as representatives stuck to talking points about the horrible harm they saw being caused by the very discussion. Ranking Democrat Bennie Thompson of Mississippi worried the hearings helped "provide a Congressional stamp of approval for groups that espouse anti-Muslim beliefs" and fuel anti-Muslim hate crimes.

None of the critics offered an example of any crime which was in any way connected to the congressional hearings.

That left Chairman Peter King, R-N.Y., frustrated. He cited a statement by Attorney General Eric Holder that there was a crisis of radicalization to violence within the Muslim-American community. Past testimony showed "[t]he threat posed by radicalized Muslim-Americans is a clear and present danger to homeland security," he said in his prepared remarks. Widely accessible videos and books in prison libraries fuel the radicalization, he noted. And classified information shows a growing problem of Islamist extremism within U.S. military ranks has reached a "truly eye-popping amount of ongoing cases."

Yet, the discussion remained blocked by partisanship.

"If you label anybody that addresses this [as] an Islamophobe or a bigot, it stifles free speech," said Zuhdi Jasser, founder of the American-Islamic Forum for Democracy and a member of the U.S. Commission on International Religious Freedom. "It prevents us from dealing with the very issue that we need to."

He said he hoped the hearings could serve as "a dialogue to bridge between those who see no problem in the Muslim community and those who see all Muslims as a problem."

For all the talk of fueling anti-Muslim sentiment, the hearings provide a chance to explain the distinction between the faith of Islam and the politics of Islamism, said Qanta Ahmed, a writer and physician who treats 9/11 first responders.

One is a faith, she said. The other is political ideology. For all the rhetoric, nothing debated in the radicalization hearings has crimped her ability to practice her religion. "I am more free to worship here than in any Muslim majority nation," she said. "Our rights are not at risk. That gets lost in the debate."

King echoed that, saying "none of the nightmare scenarios anticipated by the media ever occurred. No religious war broke out. Not one bigoted word was uttered during the four investigative hearings we held."

There is a cultural element in play, said former Wall Street Journal reporter Asra Nomani. Many Muslims have become what she called "wound collectors," citing a phrase created by an FBI agent. They cling to ancient grievances, dating back to the Crusades, and quickly turn defensive and in denial to any outside criticism.

The Quran calls on people to stand for justice, she said, even if it's within your own community. That's often easier said than done, and for Muslims like herself it creates "a culture clash where you can't talk to each other."

National Islamist organizations like the Council on American-Islamic Relations tracked the hearing with chapter leaders posting a stream of criticism on Twitter. "No such thing as Islamism," Michigan Director Dawud Walid claimed. "Is there Christianism or Jewishism?"

The term is not an invention by non-Muslims, though. The Muslim Brotherhood uses it, and this website is devoted to it.

In the inaugural hearing last year, California Democrat Jackie Speier denigrated the panelists' experiences, calling them anecdotes that offered little from which to learn. Rep. Laura Richardson, D-Calif., picked up that theme Wednesday, comparing the witness testimony to an episode of "Oprah."

Future hearings need more authoritative witnesses, she said, or else it's "similar to a community town hall that does not rise to the level of U.S. Congress."

Faiza Patel, co-director of New York University Law School's Liberty and National Security Program, stressed her view that signs of stricter religious practices among Muslims were not signs of a trend toward violent radicalization. She rejected the notion offered by some in law enforcement of a "conveyor belt" of radicalization, saying it does nothing to help identify those with potential to engage in terrorism.

King challenged Patel, too, noting prepared testimony from the Department of Homeland Security which acknowledged that "the greatest terrorist risk from those extremists who have either been recruited by Al-Qa'ida or its affiliates or inspired by their ideology. This threat is real" and played out in both a successful attack on Fort Hood and an attempted follow-up.

Those doing the recruiting and those being targeted are Muslims, King said. "Somehow to suggest that there is not a correlation between terrorist threats and people of the Muslim faith – no matter how small a minority that might be – I think that's totally erroneous.

Terrorism in the name of Islam is a threat, Patel acknowledged, and it's okay for Congress to study that. In her view, however, that is not being done based on empirical evidence.

It has been a factor for terrorists in previous cases, but "[a]ll of that research shows that the idea of religious conveyor belt that leads a person directly from embracing a religion to becoming a radical to becoming a terrorist simply does not serve as a way to predict violence."

Earlier, King noted the media criticism stirred up by the hearings and their focus on Muslim radicalization. But after a successful attack, he said, news outlets demand explanations about what went wrong. After the first World Trade Center bombing in 1993, the New York Times criticized authorities for failing to investigate "mysterious Muslims" operating out of New Jersey led by Sheikh Omar Abdul Rahman.

Now the newspaper is among media outlets critical of the New York Police Department's use of public surveillance in an attempt to identify potential pockets of radicalization.

"Closer monitoring of the sheik may not necessarily have prevented the bombing," the Times wrote in 1993. "But it might have. …If incidents like the trade center bombing can't be completely prevented, they can and should be made extremely rare."

That, King said, exactly is what this committee has been trying to do.