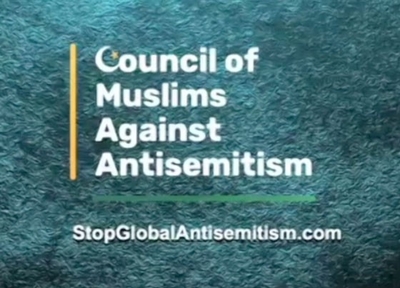 Anti-Semitism has become "a pandemic raging for many years" among many Muslims, said interfaith activist Soraya Deen. "Unfortunately though, we have no vaccine that can cure it."

Deen joined a group of reformist Muslims Wednesday – the eve of Yom HaShoah – to announce their best effort to develop that cure.

In a webinar launching the Council of Muslims Against Anti-Semitism (CMAA), author Raheel Raza announced that the organization will be guided by the International Holocaust Remembrance Alliance definition of anti-Semitism. The definition already appears on the CMAA website and the group's members seem to see it as a key in curtailing anti-Jewish hate among Muslims. Embraced by nearly 30 countries, it includes "Making mendacious, dehumanizing, demonizing, or stereotypical allegations about Jews as such or the power of Jews as collective," blaming Jews for actions by the Israeli government, and "Denying the Jewish people their right to self-determination" among the examples of anti-Semitism. It specifically notes, however, that criticizing the Israeli government as one would criticize any government is not anti-Semitic.

"I myself have been called many names the minute I challenge Islamism, political Islam, and Islamists," said Deen, founder of the Muslim Women Speakers Movement, and co-founder of the San Fernando Valley Interfaith Solidarity Network. "I'm called a Zionist. A Jew lover. And they often say, 'She's paid by the Zionists.' And the blanket indictment is that all Jews are responsible for anything and everything the government of Israel does."

Deen cited radical imams inside the United States who prayed for Zionists to be annihilated.

For example, a Texas-based imam in 2017 asked Allah to "destroy the Zionists and their allies, and those who assist them, and those who allowed them into the abodes of the Muslims." That same month, when the United States announced it was moving its embassy in Israel from Tel Aviv to Jerusalem, a Jersey City imam said the Muslim nation will be humiliated "So long as the Al-Aqsa Mosque remains under the feet of the apes and pigs" in a reference to Jews.

Months earlier, an imam in Davis, Cal. publicly prayed that "Allah, liberate the Al-Aqsa Mosque from the filth of the Jews. Oh Allah, destroy those who closed the Al-Aqsa Mosque. Oh Allah, show us the black day that You inflict upon them, and the wonders of Your ability. Oh Allah, count them one by one and annihilate them down to the very last one. Do not spare any of them."

The intensity of Muslim anti-Semitism "was imported into the Middle East in the 1930s ... as a way of rebelling and retaliating against people who were escaping persecution in Europe," said Haras Rafiq, former CEO of the London-based Quilliam International, who now serves as a trustee for a British charity, Muslims Against Antisemitism (MAAS).

Jews are cast as "the other," meaning outside the Muslim community. Jews are seen as a monolith, and seen as "the real reason why Muslims are being oppressed. Not only in Palestine. If you go to places like Pakistan and you talk to people about their problems, everything is Israel and the Jews' fault."

That explains the rhetoric from imams inside the United States calling for Israel's annihilation, Rafiq said.

"Anti-Semitism is being pushed now from the pulpit to make it almost a religious duty for Muslims to believe that they have to be anti-Semitic – they have to hate people who are Jewish – and they have to hate the state of Israel. and that's the only way that they can survive and please God and be practicing Muslims. That is actually a load of rubbish."

Several speakers acknowledge that they face an uphill climb. Countries that push the harshest rhetoric toward Israel and Jews – Iran, Turkey and Qatar – all have "a large media apparatus" in state-run television stations to push conspiracy theories and hate, said Zuhdi Jasser, founder of the American Islamic Forum for Democracy.

The CMAA, Raza vowed, will take "concrete action and not just toothless condemnations of countries like the Islamic Republic of Iran, a world leader in the promotion of genocidal, Jew hatred. Anti-Semitic leaders like Turkey's [Recep Tayyip] Erdogan, or the [Palestinian Authority's] Mahmoud Abbas, and entities like the Muslim Brotherhood or any of its offshoots, that systematically promote the hatred of Jews in their rhetoric or educational systems."

In addition to fighting media empires like Press TV or Al Jazeera, Jasser said, the Western narrative often is controlled by Islamist groups with roots in the Muslim Brotherhood, such as the Islamic Society of North America (ISNA) and the Council on American-Islamic Relations (CAIR).

They have formed alliances with the far Left, Jasser said, noting that Islamists and far Left activists have "little in common" beyond "their common hatred."

Former Wall Street Journal reporter Asra Nomani saw the way such hatred can lead to horrific violence. She was working in Pakistan after 9/11 when her colleague and friend Daniel Pearl was kidnapped and beheaded. She launched the Pearl Project to investigate and identify the people responsible, but noted that a Pakistani court recently set one of the killers free.

There's a price for her activism, and for the campaign CMAA members launched, she said.

"We have been called every smear word in the book," Nomani said. "I've been called a Zionist media whore because I dared to stand up for my friend who was Jewish. And this isn't just the stuff of history. Danny was kidnapped and murdered in 2002. But today, there are people in Pakistan who believe he is still alive and that it is a Mossad conspiracy to shame Pakistan."

Nomani, Raza and Jasser also are founders of the Muslim Reform Movement, which advocates "for secular governance, democracy and liberty. We are against political movements in the name of religion. We separate mosque and state. We are loyal to the nations in which we live. We reject the idea of the Islamic state."

CMAA members have been fighting Islamist power brokers in capitals like Tehran and Ankara, and in American Islamist groups like CAIR and ISNA, for years without wavering. That same courage should serve them well in calling out anti-Semitism among Muslims.