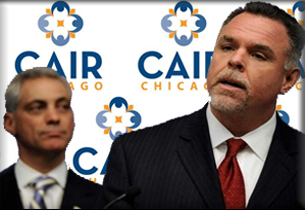 The Council on American-Islamic Relations (CAIR) is exploiting recent criticism of the New York Police Department's surveillance of a Muslim students group and some mosques to acquire legitimacy and intimidate police departments to promise not to investigate Islamic groups.

CAIR has been described as a front for Hamas by federal law enforcement.

After a meeting Tuesday, CAIR's Chicago chapter announced that Police Superintendent Garry McCarthy will speak Saturday night at CAIR-Chicago's annual fundraising banquet. In their meeting, McCarthy reportedly said surveillance by Chicago police would not be used in intelligence gathering as it was in New York.

"We want to know, should we be concerned about this happening in Chicago?" CAIR-Chicago Executive Director Ahmed Rehab told Fox News. "And if the answer is no, we need him to come out and say this was wrong."

The NYPD has been criticized for surveillance programs, nearly all of which involved activity and material in the public domain, of Muslim subjects including the Muslim Students Association. As the Investigative Project on Terrorism reported last week, the MSA was created by the Muslim Brotherhood and has a disturbing history of spawning people involved in terrorist plots and spewing radical rhetoric.

By yielding to CAIR pressure, the city's top police officer will share the microphone with an imam tied to a Hamas-support network which court papers indicate was responsible for CAIR's very creation.

Kifah Mustapha, head imam at the Mosque Foundation in Bridgeview, is being honored with the chapter's "Mobilizer Award."

Mustapha is suing the Illinois State Police after being rejected in his bid to become the agency's first Muslim chaplain. The decision followed a report by the Investigative Project on Terrorism showing he raised money for the Holy Land Foundation, which saw five former officials convicted in 2008 for illegally routing millions of dollars to the Palestinian terrorist group Hamas.

He also sang in a band which frequently performed at HLF fundraisers. In a videotaped performance entered into evidence at the HLF trial, a Hamas caption in shown the background and Mustapha can be heard in the chorus reiterating Hamas' call for jihad:

"O mother, Hamas for Jihad. Over mosques' loudspeakers, with freedom. Every day it resists

with stones and the dagger. Tomorrow, with God's help, it will be with a machine gun and a rifle."

Mustapha also worked with the Islamic Association for Palestine which, like HLF and CAIR, was a part of the Muslim Brotherhood's "Palestine Committee." The committee included a series of separate entities, which prosecutors say and government exhibits show, was created to help Hamas politically and financially in the United States.

In recent years, Mustapha has helped CAIR raise hundreds of thousands of dollars at fundraisers. CAIR attorneys, in turn, are representing Mustapha in his lawsuit against the state police.

Also addressing Saturday's banquet is Georgetown University Professor John Esposito, who has amassed a long record as an apologist for terrorist supporters. Esposito served as an expert witness for the defense in the HLF trial. He sat on an editorial board for the Middle East Affairs Journal, which was published by another wing of the U.S.-Hamas support network, called the United Association for Studies and Research.

In addition, Esposito wrote to a federal judge, advocating the release of Palestinian Islamic Jihad board member Sami Al-Arian, calling him "an extraordinarily bright, articulate scholar and intellectual-activist, a man of conscience with a strong commitment to peace and social justice."

Esposito has also defended Hamas and Hizballah, saying each does not deserve the label of a terrorist organization. "One can't make a clear statement about Hamas," Esposito said in an interview from 2000. "One has to distinguish between Hamas in general and the action of its military wing, and then one has also to talk about specific actions. Some actions by the military wing of Hamas can be seen as acts of resistance, but other actions are acts of retaliation, particularly when they target civilians."

In the same interview published by The Middle East Affairs Journal, he said some Hizballah actions could be considered terrorist, but "Hezbollah in recent years has shown that it operates within the Lebanese political system functioning as a major player in parliament. But when it comes to the south it has been primarily a resistance movement."

Like other CAIR officials, Rehab is evasive when asked if Hamas is a terrorist group. Asked during a November 2006 interview on BBC's Hardtalk for a "straight forward" condemnation, Rehab hedged.

"Do I condemn the hospitals run by Hamas or the schools that help children learn, in Hamas? No. I don't condemn that," Rehab said. "But I do condemn the blowing up of Tel Aviv pizzerias or cafes."

When banners connecting the Star of David with a swastika and Palestinian deaths in Gaza flew during a January 2009 pro-Palestinian rally, Rehab was offended when asked about it.

"As hundreds of innocent human lives are crushed in full view of the world by a belligerent Israeli government, I find it appalling that some on the pro-Israeli side are better concerned with cardboard paper," Rehab said.

He dismissed the prosecution theory in the HLF case as ludicrous and said the evidence amounted to nothing more than "textbook guilt by association."

Jurors disagreed. In a verdict upheld by the 5th Circuit Court of Appeals, they reached guilty verdicts on 108 counts. "The purpose of creating the Holy Land Foundation was as a fundraising arm for Hamas," said U.S. District Judge Jorge Solis said during a sentencing hearing.

He also reacted strongly to FBI raids in September 2010 targeting activists in Chicago and Minneapolis who are suspected of providing support to the Popular Front for the Liberation of Palestine and Colombian FARC terrorist groups. Rehab called the investigation "a waste of taxpayer dollars," while his chapter issued a statement saying "The FBI has overstepped its bounds in targeting individuals based on their commitment to peacefully challenge US policies in Palestine and Columbia (sic). The Justice Department should call off the investigation and return what was taken in the searches."

The FBI, it bears repeating, cut off non-criminal communication with CAIR in 2008 based on evidence in the HLF case showing CAIR's founding was part of the Muslim Brotherhood's "Palestine Committee" network in the United States.

In testimony during the HLF trial, FBI Special Agent Lara Burns said CAIR was created after a secret meeting of Hamas members in supports in Philadelphia that was called to discuss ways to "derail" U.S.-led peace efforts which resulted in the 1993 Oslo Accords.

One conferee, FBI transcripts show, said that they needed to "begin thinking about establishing alternative organizations which can benefit from a new atmosphere, ones whose Islamic hue is not very conspicuous."

"The organization that was started as a result of that was CAIR, C-A-I-R?" prosecutor Barry Jonas asked Burns.

"That was an organization that was created after the Philadelphia meeting as a result of this," she said.

Since the cutoff, CAIR has continued its consistent criticism of law enforcement counter-terror investigations, especially those involving informants and sting operations. A year ago, CAIR's San Francisco chapter published a poster urging people to "Build a Wall of Resistance; Don't Talk to the FBI" to promote an upcoming event. The poster features an FBI agent prowling in front of peoples' homes as doors slam shut in the backdrop.

After that, a board member from CAIR's New York chapter gave a presentation in which Muslims were told FBI agents were willing to break the law to set them up. "They will do anything, anything within their power and oftentimes beyond their power to get you to talk," Lamis Deek told her audience last April. "They will threaten you. OK? I've had one case where they tried to blackmail my client, I mean blackmail, seriously blackmail; that's illegal. But they'll do it."

Rehab has criticized some of the sting operations. The Bronx Four, a case involving four converts to Islam arrested after planting what they thought was a car bomb outside a synagogue, had nothing to do with the men's faith, he wrote in a Huffington Post column. Rather, it was the FBI's "self-deluding initiatives that seem to seek terror-case quotas by entrapping 'intellectually challenged' outcasts and then deceptively marketing their isolated cases as evidence of an imminent and contiguous global threat with homegrown components."

Despite the suspect ties of CAIR and those it honors at its banquet, a slew of Illinois politicians have issued statements saluting the Chicago chapter. U.S. Sen. Dick Durbin issued two letters praising CAIR's Chicago chapter last year.

"CAIR-Chicago has provided a comprehensive array of invaluable services to the Muslim-American community and has facilitated important partnerships and civil rights advocacy opportunities for Muslim-Americans throughout the Chicagoland area," said Emmanuel, the former White House Chief of Staff to President Obama.

McCarthy was police chief in Newark, N.J. and was informed about NYPD surveillance that took place there. But Emmanuel this week emphatically ruled out any similar tactics. "We don't do that in Chicago, and we're not going to do that," he said.

Quinn similarly commended the group "for your ongoing commitment to serving the needs of Chicago's Muslim population and for working towards ensuring justice and civil rights for all the communities you serve."

CAIR's ability to attract so many public officials, including Chicago's top police official, to a chapter banquet is just another example of the obsequious nature of politicians jumping to satisfy the demands of an unreliable actor. The FBI, which uncovered the evidence tying CAIR to a terror-support network, made it clear that "until we can resolve whether there continues to be a connection between CAIR or its executives and HAMAS, the FBI does not view CAIR as an appropriate liaison partner."

Why other, less-informed officials feel free to dismiss that linkage is mystifying.

U.S. soldiers have an extremely low regard for their Afghan counterparts. The soldiers' top complaints were that the Afghans were drug abusers, thieves, traitorous, unstable, incompetent and had poor officers and non-commissioned officers. The soldiers also said Afghan recruits lacked discipline, were dangerous in firefights, were cowardly, lazy and had poor hygiene.