While Turkish President Recep Tayyip Erdogan has been mending diplomatic fences lately, he still makes inflammatory statements against Western countries. On Friday, he accused Finland and Sweden of allowing too many terrorist organizations on their soil.

It's an odd complaint, given the fact that Erdogan has had no qualms hosting terrorist groups in Turkey.

Until recently, Erdogan's relationship with Hamas was stellar enough for the group to consider him the Islamic leader to follow.

The situation recently changed as Turkey announced it would deport a number of Hamas officials and warned the remaining elements to stop their plotting against Israel. This represents a reversal of policy following years of Turkey providing Hamas with political and economic support.

"The Israelis gave Turkey a list of Hamas members and information about involvement of some of them in 'military' [terrorist] activity. In response, the Turks contacted Hamas and told them, 'You promised you wouldn't do anything like that here, so now you need to leave,'" an unnamed Palestinian official told Israeli daily Israel Hayom.

It is not yet clear where the deported Hamas members are staying. Hamas has been quiet about being forced out of Turkey, but a spokesman criticized the country's condemnation of a Palestinian terrorist attack.

"We deplore the statements of the Turkish embassy to the Zionist entity, and the Bahraini Foreign Ministry, which condemned the 'resistance' operation in Tel Aviv," said Hamas spokesman Hazem Qasim.

In that April attack, a gunman killed three civilians at a bar. It was the fourth deadly attack in Israel within weeks of each other. Turkey condemned the shooting and sent "our condolences to the families of those who lost their lives in the said attack, as well as the Government and the people of Israel."

"I don't think Erdogan is really committed to parting with these groups. He may be limiting his engagement and restricting the movements of these groups in Turkey to extract short-term benefits at the bilateral relations with some of the heavyweights in the MENA region and signal the West that he is on course-correction," Bozkurt told the Investigative Project on Terrorism.

Erdogan does not believe Hamas is a terrorist organization and has defended it for more than a decade. He describes it as "a political party ... a resistance movement trying to protect its country under occupation."

He repeated that view in 2018. "Reminder to [then-Israeli Prime Minister Benjamin] Netanyahu: Hamas is not a terrorist organization and Palestinians are not terrorists," he wrote. "It is a resistance movement that defends the Palestinian homeland against an occupying power." 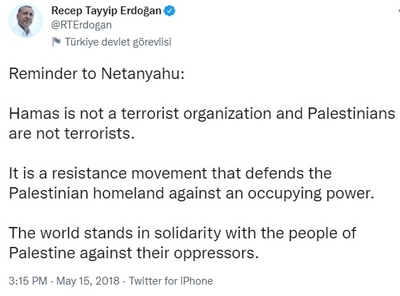 Given that attitude, why is Erdogan now removing Hamas officials at Israel's request? Turkey's spiraling economic crisis has Erdogan "fighting to survive politically inside Turkey," Bozkurt said. "He has been failing to deliver on his government promises to the electorate."

Turkey's economy has been ailing for the past few years with the Turkish lira losing 45 percent of its value in the past 12 months amid soaring inflation rates.

Turkey hopes better international relations lead to economic gains. Turkish exports to Israel are growing and the two countries are discussing a natural gas pipeline which Erdogan described as "one of the most important steps we can take together for bilateral ties. "

Erdogan's move against Hamas isn't the first time he agreed to deport Islamists for diplomatic gains.

Senior officials of Egypt's Muslim Brotherhood found refuge in Turkey for years, operating TV networks directed at bashing the Egyptian government and spreading false rumors. This support naturally strained Turkish-Egyptian relations. Those media outlets have been shut down and the Brotherhood officials have been deported.

Erdogan visited the United Arab Emirates in February, attempting to smooth relations with a country that he shown hostility toward for years because of its anti-Islamist stance and its economic support for Egypt. But the UAE pledged to invest $10 billion in Turkey's economy last November.

"He needs a financial lifeline and economic benefits from the restored ties with a number of countries in the MENA region and to reduce tension with the United States and Europe, [which are] main trading partners and a source of direct investment in Turkey," Bozkurt said. "As soon as he feels confident enough, he will resort to old policies."

Those old policies allowed Hamas to plot attacks on Israeli civilians from the safety of their Turkish refuge. Hamas commander Saleh Al-Arouri orchestrated a 2014 kidnapping and murder of three Israeli teenagers in 2014. That terrorist attack directly led to a war that summer. Erdogan accused Israel of genocide and compared it to Nazi Germany, but Turkey took no action at the time to rein in Hamas.

Rather, Hamas political leader Ismail Haniyeh made frequent visits to Turkey and held official meetings with Erdogan as recently as December 2019.

At the moment, Hamas leaders are mulling the possibility of moving to Malaysia, which has an Islamist-friendly government and an existing Hamas support network. An unnamed Hamas leader described Malaysia as "the best country to receive Hamas members," according to the New Arab online outlet. Hamas leader Ismail Haniyeh maintains contact with Malaysian officials and counts on Malaysian political support.

Hamas has decided not to "take any hostile stance toward Turkey" over the deportations. That might be one reason why Erdogan still enjoys the image of the global Islamic leader. His tight control over Turkish media also helps.

Should his reputation suffer, Erdogan will find other ways to prop up his image. "Remember the conversion of Hagia Sophia to a mosque two years ago – that would generate a lot of credit for him across many Muslim communities in the world," said Bozkurt.

"Critical, independent and opposition media was decimated in Turkey," Bozkurt said. "Over 100 journalists are in jail and over 200 media outlets were shut down including the nation's largest circulated Today's Zaman. So, Turks do not really get the facts and truths, but they were rather exposed to government propaganda day in and day out."

Economic realities have forced Erdogan to repair some of the damage he has wrought by trying to become the leader of Sunni Islam and create a modern Ottoman Empire. Critics, like Bozkurt, see the moves as cynical and short-term.

Erdogan could not sustain this kind of support, and changes had to be made.