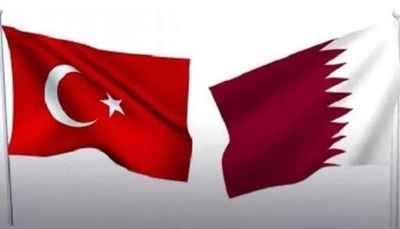 As Turkey's lira sunk to a record low on Thursday, and the Turkish economy, hit hard by the coronavirus, attempts to bounce back, the Islamist government led by President Recep Tayyip Erdogan pursues an increasingly daring neo-Ottoman policy throughout the Middle East and eastern Mediterranean.

Turkey has become the state leader of the regional Sunni Islamist bloc, whose most prominent other members are the Gulf state of Qatar, and Hamas, as well as international networks of Muslim Brotherhood activists that cooperate with this coalition's activities.

One recent 100-page report from a London-based think tank concluded that Qatar and Turkey are "bankrolling and supporting an interlinked network of Muslim Brotherhood organizations across Europe."

Turkey's profile has been growing in the Palestinian arena too, as illustrated by the fact that Istanbul hosted, for the first time, talks between domestic bitter rivals Hamas and Fatah, who previously used Egypt as a mediator. Fatah's willingness to send a delegation to Turkey for the talks indicates a potential willingness by Ramallah to give more influence to Turkey and the Islamist bloc it heads.

Erdogan's neo-Ottoman and pan-Islamist vision of a renewed ascendency of the old Turkish empire was expressed clearly and concisely earlier this month, when he declared that "Jerusalem is our city," before referring to the Ottoman Empire's four-century rule over the city, running from 1517 to 1917.

A Turkish-funded Islamic center in Jerusalem is reportedly hosting tourists with Muslim Brotherhood links, and promoting messages by the Islamist coalition led by Ankara.

Hamas politburo chief Ismail Haniyeh is a guest of honor in Turkey, and the country has acted as a base for a Hamas headquarters that attempted to orchestrate terrorist cells in the West Bank.

It appears difficult to avoid the conclusion that the more Erdogan and his ruling AKP party are challenged domestically, economically, or by its ongoing conflict with the Kurds, the more provocative they become.

According to Avivi, the party's ideological doctrine is based on a rejection of the secularism of the Turkish state founded by Mustafa Kemal Ataturk a century ago, and a return to being the region's pan-Islamic and geo-political center of gravity, thereby returning Turkey to its historical size and role.

Ataturk, who adopted Latin letters instead of Arabic, prohibited religious Muslims from entering the government and military, and worked to attach Turkey to the West. The AKP wishes to see Turkey return to a lead position in the Middle East. After coming to power in 2002, the party began to focus on developing the poorer, more traditional eastern part of the country, an initiative that saw new highways, schools, and madrassas appear there.

Over the years, Turkey's approach to the region became increasingly driven by neo-Ottomanism, and Erdogan's rhetoric on Israel became more and more hostile.

Yet Turkey also has maintained official diplomatic ties with Israel and increased its bilateral trade with it, creating a parallel, quiet, pragmatic channel of relations (though ironically this did not stop Turkey from threatening to cut ties with the UAE over its recent normalization pact with Israel).

Despite maintaining economic and (at least on the official level) diplomatic ties, Turkey is gradually becoming a strategic problem for Israel, and more acutely so for Greece, as well as for pragmatic Gulf Arab states, which view Ankara as a problematic rival. The UAE has described the presence of Turkey's 5,000 soldiers in neighboring Qatar as a destabilizing force.

In another sign of increasing assertiveness, Turkey has sent soldiers and thousands of Syrian Islamist mercenaries to fight in Libya on behalf of the Islamist administration in the western part of the country. Turkey views both geo-political influence and opportunities to extract large quantities of natural gas and oil from under the Mediterranean Sea, in an area that Turkey and the Libyan Government of National Accord (GNA) agreed to demarcate in 2019.

Meanwhile, Turkey has aggressively challenged an Egyptian-Greek demarcation of Mediterranean maritime borders, which nullified its own agreement with Libya, and reportedly sought help from Muslim Brotherhood elements to attack the demarcation agreement announced by Athens and Cairo in August.

Turkey's non-recognition of the Egyptian-Greek deal is a continuation of its attempt, together with Libya's GNA, to create a maritime buffer between Egypt and Greece and disrupt their plans to exploit energy in the area.

Turkish battleships repeatedly entered energy gas exploration zones in the eastern Mediterranean in areas claimed by Greece in recent months, prompting Greece to warn of a potential military clash. Tensions over energy rights are joined by Turkey's claim over the Greek island Kastellorizo, and Turkey's sending warships in its direction.

Since coming to power, the AKP party has worked tirelessly to reverse the secular character of the modern Turkish state in 2002.

As Avivi, the former Israeli ambassador to Turkey, has noted, it was Ataturk who ended the Ottoman Empire and shifted sharply towards a secular state, and it is Erdogan who envisions a return to the days of a Turkish sultan exercising vast political-military control over the Middle East and central Asia.

The AKP rejects Ataturk's dismemberment of the Turkish caliphate, and its neo-Ottoman policies today reflect this ideology.

In Syria, Avivi stated, Turkey believed it could turn ISIS against the Kurds, but found itself at war with both ISIS and the Kurds (although Turkey has reportedly employed a revolving door policy when it comes to captured ISIS activists).

Turkish armed forces and their proxies have occupied northern Syria since 2016, and have entrenched themselves with no signs of an imminent departure.

"Erdogan has three identities – Islamist, Turkish, and Ottoman – and he sees no contradiction between any of these. He combines them," Brigadier-General (ret.) Yossi Kuperwasser, a senior fellow at the Jerusalem Center for Public Affairs, and former head of the research division in the IDF military intelligence branch, told the Investigative Project on Terrorism.

Despite all of the recent developments, the Islamist bloc led by Turkey is growing weaker, Kuperwasser argued, and the bold move by the UAE and Bahrain in normalizing ties with Israel is evidence of that. Still, he said, "that doesn't mean the bloc has been weakened in every area. Erdogan's forceful conduct has had some achievements."

In response to the normalization shift by Gulf states, Fatah has, at least temporarily, contemplated whether to move closer to the Muslim Brotherhood camp, Kuperwasser said, though Fatah has not confirmed that it will do this. "This would be a surrender to Hamas," he said. Such a shift could lead to Fatah adopting more radical positions and placing its West Bank rule at greater exposure to infiltration by Hamas, which would directly undermine its own interests.

"Turkey is the main state and military leader of this bloc. They are a large state player, and can influence Europe as well, through [the millions of Syrian] refugees," he added. Erdogan has threatened to open his country's borders and allow the refugees to travel into Europe.

Qatar, for its part, promotes public relations for the Islamist bloc, and uses its vast treasure to provide financial support for the coalition's activities.

"Hamas brings the struggle, and the direct friction with the enemy [Israel]," said Kuperwasser.

Turkey's close cooperation with Hamas is continuing despite the fact that its headquarters left Turkish soil last year. Turkey has granted citizenship to dozens of Hamas members over the past two years, including senior members of a Hamas terror cell, according to one report.

On Thursday, the Times of London, citing Western intelligence services, reported that Hamas "set up a secret headquarters in Turkey for carrying out cyberwarfare and counter-intelligence operations," adding that the cyber operations are being run out of Hamas's official offices in Istanbul.

Turkey signed a $2.5 billion contract with Russia for the system in 2017, with deliveries beginning in 2019 – a development that led the United States to eject Turkey from the F-35 fifth generation fighter jet program last year.

Ultimately, it seems that economic challenges at home will do little to slow Turkey's pursuit of a neo-Ottoman Islamist foreign policy. Its satellite companions, Qatar and Hamas, will continue to form a Sunni Islamist coalition that is affiliated with the Muslim Brotherhood brand – one that will have to be watched closely.